A Journey of a Thousand Blog Articles…

…begins, in my case, in September 2008, with a ride to the Mediterranean from my ex-home in Montpellier.

Yes, after 11.5 years I’ve finally hit the Big 1000, a feat I never could have imagined way back then. But before I get too uppity, this is really child’s play when compared to serious bloggers like Tootlepedal, who is thousands ahead and has a consistency that is beyond admirable.

But outside Covid Times, I just don’t have a blog a day in me, so I’ll take this 1000 and I’ll even stop to pause and consider what this journey has meant to me…briefly, I need to get on the trainer.

When I started this blog (then named “Mr. Patterson Goes to Languedoc”) I was a very different kind of bike rider and my purpose – if you can call it that – was simply to record the rides I did all over Languedoc; the name we used to give the region of Occitanie in olden times. I was riding to explore and for fun, as well as a little exercise. From these types of “travelogue” articles I made a few friends, possibly including Tootlepedal and a few other lovers of the bike and of France. My tiny new world in Europe was cracking open.

Back then I used to ride with my wife, too, and we even managed to do some big trips together, loaded down with a BOB trailer, tent and camp stove. I quickly discovered how civilized Europe was, however, and gave up the camping on this great trip we did from Nice to Prague in 2010. 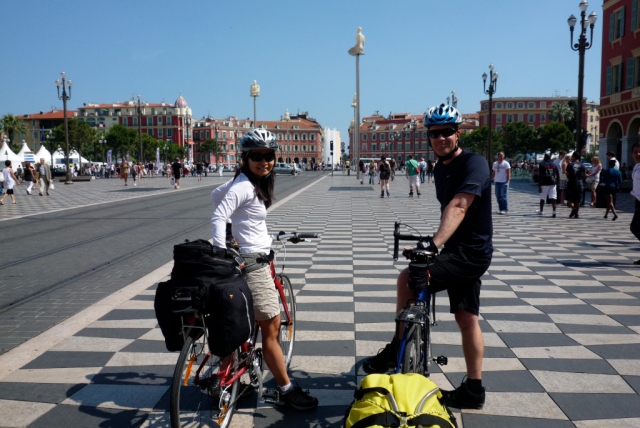 In 2010 I learned about the Etape du Tour, perhaps from Karsten, and we decided that it might be a good idea to ride the 2011 version. This is one of those ‘turning points’ you hit in life, which for me meant finding the big ring on my crank set and learning new acronyms like AT, FTP and WTF! (this last one comes out after every Etape I’ve done). It also definitely put me on the path to eventually running tours, which is coming soon!

Somewhere along the line I must have been contacted by someone who seemed interested in seeing Languedoc with a guide because I added this ‘service’ to my blog at one point. I don’t think I had much idea of what I was doing, but in the summer of 2011 my first ever cycling clients, Steve and Anne from New York, never let on that they minded very much.

That same year I was contacted by a couple of small magazines to write some content or answer some questions about ‘middle aged cycling’. I also got sent on a couple of junkets through friend Lyn at Freewheeling France. One was to the north of France / Flanders and the other a 3-day solo trip up the Trans Ardennes Bike Path, paid for by the Office of Tourism up there. Clearly I was hitting the big time.

Or maybe not. My junkets began and ended that year.

A year later I discovered something called Haute Route – essentially a week’s worth of Etapes every day for 7 days. The next year I met my step-brother Rob for the very first time and took things to a new level by planning to ride Haute Route Alps 2013, on my now-new Bianchi Infinito (the blog article introducing it brought me several new friends and blog readers). That year was one of the best of my life and I really set myself on a fast-track to learning how to train properly, lose weight (nearly 30 lbs by the time I started the race) and push my limits. It also gave me street cred for my infant tour company (called “Cycling Languedoc” at that time).

It was also the beginning of a long relationship with Haute Route. I’ve ridden 6 of them now and we are an official tour operator of a couple of their events.

Till now the blog was mainly about me, me, me, but my cycling career started to take another turn in 2014 after partnering up with riding buddy John and starting 44|5 Cycling Tours. Now I was riding all over Europe, but sometimes with clients ahead of me on the road. We began small, very small, and just let the company grow (or not, depending on the year) organically. Luckily it did grow and we’re still at it, or waiting to be still at it once Covid goes away.

As I wrote this article more and more ‘key moments’ popped up and I realize there are literally hundreds of people I could name as coming into my life directly/indirectly from this blog. Basically my whole cycling world (aka my whole world) right now started here. All the many clients I now call friends, our hotel and restaurant partners that we see year after year, and even the mortgage that is being paid – slowly – has the blog at least in part to thank. A guy could get emotional about it if he let it (sniff).

Do I have another 1000 in me? Perhaps unluckily for you, if there’s one thing I can do well, it’s produce large amounts of drivel. I think I’ve got it in me!

20 thoughts on “A Journey of a Thousand Blog Articles…”