Man, that was a loooong hiatus from blogging. I was half expecting WordPress to have cancelled my account from inactivity. Happily, I still have a blog provider and even a few people checking from day to day.

This year’s trip had two themes, at least for me. One was to continue my piece-by-piece ride around the world by starting in Nice and heading east (rode to Nice from Normandy in 2001) into unknown territory. The other was to see what Eastern Europe had to offer. Other than a whole lot of hot, nasty days in the saddle, I’m glad to report it didn’t disappoint.

We took the train from Montpellier to Nice – a comfortable, one-shot ride, much of which follows the coastline of the Riveria, with its packed beaches and leather-skinned old people…many of whom are unnecessarily naked. More on that in another blog. Here we are in Nice, near the end of the day, but the beginning of our ride. 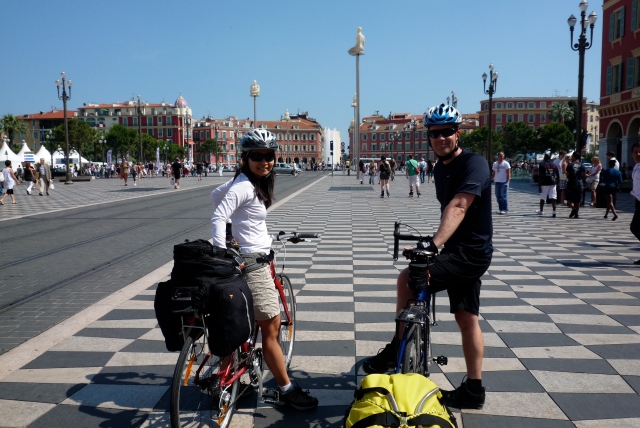 Next, a shot of the coast at the end of the Promenade des Anglais.

And a look back at Nice.

And this curious photo of a hotel with all the usual flags out front..except the one on the far right that is. Having lived in a city with a very healthy Pride Parade (Vancouver) I immediately thought this hotel was advertising itself as being gay friendly. However, according to Wikipedia, the rainbow flag could be a symbol of peace, diversity or inclusiveness. All nice things, but I’d still be curios to know what it’s all about. Anybody have any ideas? 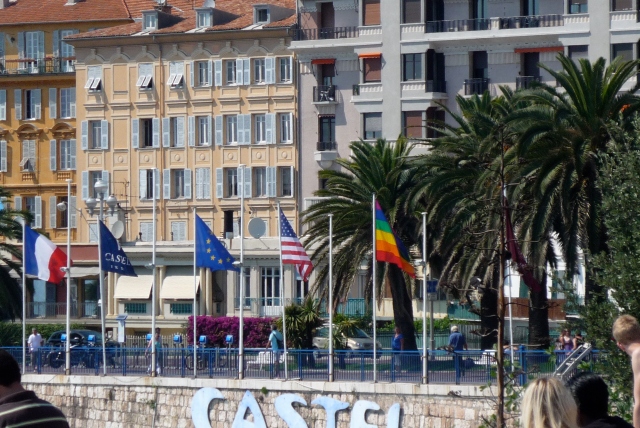 This is Villefrance sur Mer, where Shoko and I spent a glorious month taking a crash course in French two years ago. The school, one of the most famous in France, comes with deux thumbs up from us for sure. No matter how awful my French remains I can’t blame it on the wonderful teachers at l’institut.

Our destination was Menton, the only place with a campsite between Nice and the Italian border. And here it is in all its glory. Like all of the Riveria, Menton is full of tourists, but they tend to be mostly Italians which, at least for me, makes it seem just a tad more exotic than the towns back down the coast, filled as they are with the white-socked, bum-packed crowd. 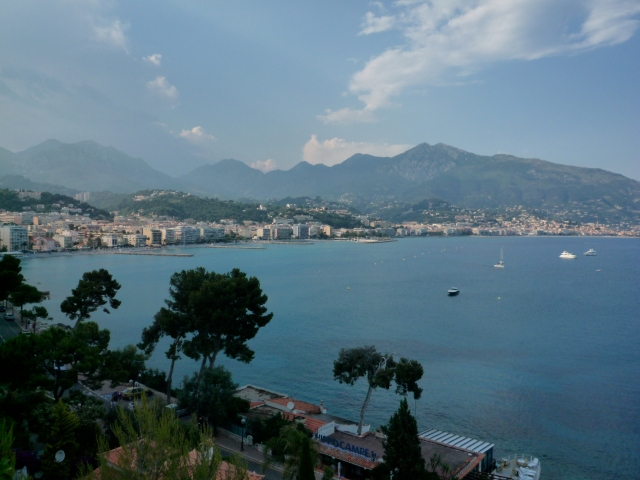 Next up Italy, where if the cycling sucks the food is guaranteed to make amends!

3 thoughts on “French Riveria – Day 1 of a whole bunch more!”