After a far-too-long drive to Spain on Friday (we got caught in some Euro 2016 traffic near the stadium in Toulouse), John and I arrived to some promising vistas in Ainsa, a town an hour away from the start of the Quebrantahuesos Gran Fondo. Our hotel was named Dos Rios, which John quickly figured out meant Two Rivers. That will remain an assumption, however, because we only had time enough to find one of them before heading to Sabiñanigo to get ourselves registered. 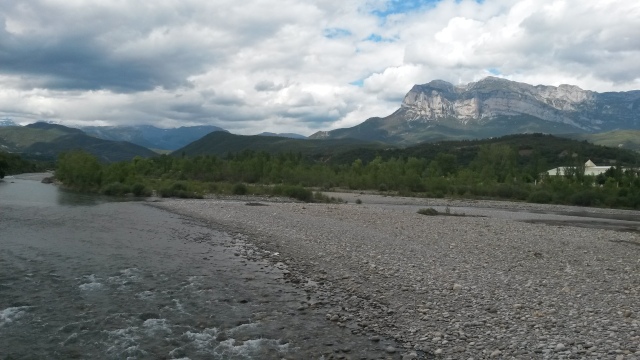 You can tell how big a deal a sportive/gran fondo is these days by the number of Mavic vehicles showing off at the race village. The Quebrantahuesos had a healthy amount.

What was lacking was a bit of space between sponsors’ tents on the walk to get our numbers, jerseys and chicken soup (see below). 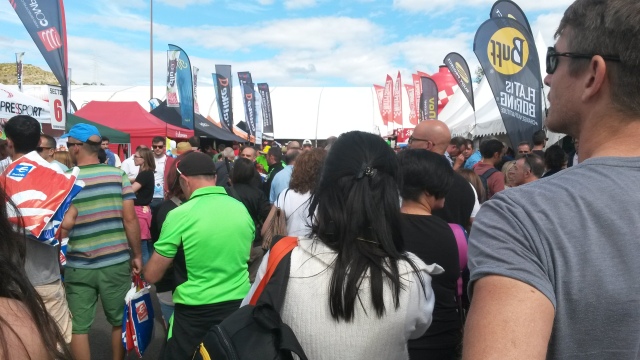 We thought this was milk, but were confused by the chicken on the box, so didn’t have the guts to try any for breakfast the next morning.

Gran Fondos are made for all sorts of riders, including those who want to carb up on beer instead of pasta. You’ll be proud to know that I passed this stand by, reluctantly. 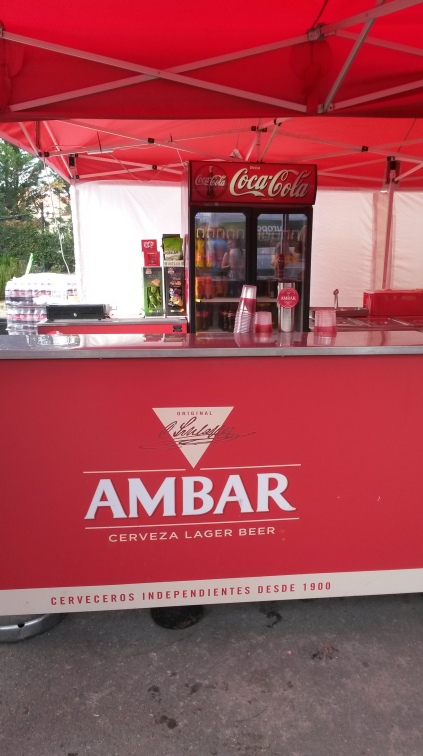 Number plates on bikes, clothes for the next morning still a mystery but all packed in our bags, John and I ventured out into the heart of Ainsa to soak up the pretty village atmosphere and try and forget about the 200 km and double crossing of the Pyrenees that was waiting for us the next morning.

How many times has this happened to you? You arrive at the parking lot in the morning and get out of the car. You have goose bumps on your goose bumps and you start doubting all the clothing decisions you doubtfully made the night before.

I went from ‘Ah, I’ll just wear my summer kit with arms and my vest’ to ‘Maybe I’ll do my long-sleeve wool jersey, two pairs of gloves, cycling hat and winter shoe covers…and the vest’. Glad I did, too, but that comes later. I don’t want to speak too soon, but I might be getting wiser in my middle age. 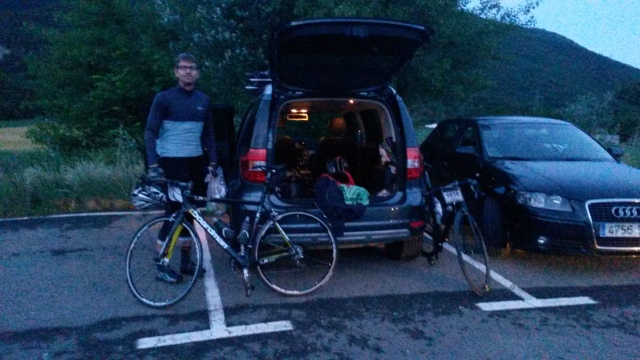 I’m not sure how this happened, but before the race John and I decided that we ‘just wanted to finish’. I haven’t felt the motivation to be very race-like this year anyway, so it was sort of fine with me to go this route. It helped that the start of the Quebrantahuesos was not the heart-exploding sprint-fest that seems to happen in every French sportive we enter. It was fast, but controlled, and nobody seemed to be really pushing.

For the first 25 km or so we had a nice big average speed and I was feeling confident we’d be back before all the paella was gone, but then the Col du Somport (1632 m) got in the way and by the time we hit the the freezing (okay, not quite freezing –  1 C) summit my hopes were diminished. The first few kilometers on the descent off the Somport were some of the coldest moments I’ve spent on a bike, and the flat I had half way down didn’t help much. As I was trying to bend my fingers around my tire lever John passed by, saying that he’d wait at the bottom. I just grunted, wondering if I’d ever see it.

Ten minutes later, and warmed up from all that pumping, I was at the bottom and flew right past John, who caught up a while later near the timing mat at the bottom of the Col de Marie-Blanc. This col (1035 m) was the lowest of the three on the menu, but by far the steepest (10 km at 7.5%). It’s these types of climbs where I feel the regret of all those chorizo pizzas I love so much. And the beer, I guess. Oh, cheesecake, too.

But I felt pretty good on the Marie-Blanc and rode up that pretty mountain in a manner somewhere south of ‘dancing’ and just north of ‘slog’.

John was waiting at the next food station, determined that we were going to finish this thing together. We had a jamon sandwich, some chocolate covered cookies, a blue drink that must have been ‘sporty’, and took off in search of the last col of the day – Pourtalet (1794 m).

The Pourtalet is not steep (4.4%), so I nearly disregarded it as a ‘problem’ when looking at the route. Well there was a ‘problem’ with the Pourtalet and that was the distance – 29 km. ‘Slog’ came back to visit on this long, slow ascent, as I tried to avoid the taunting kilometer signs that would just not end. At the food station on the other side of the pass I was more than pleased to have some ‘hot soap’, offered to me by a well-meaning Spanish woman who was just a bit off on her pronunciation. To be honest, I would have probably drunk it even it was soap and not the famous chicken broth from the photo above.

Oh, and John was gone. I flew down the wide, fast descent off the Pourtalet, but he never stopped for soap and was far up the road, finishing several minutes ahead of me. He did wait to enter the paella corral, though, where we were treated to some serious Spanish efficiency.

Young girls serving at one end and a man with a big pitchfork cooking on the other, in what can only be described as a Jurassic-sized paella pan. It was even edible, more or less. 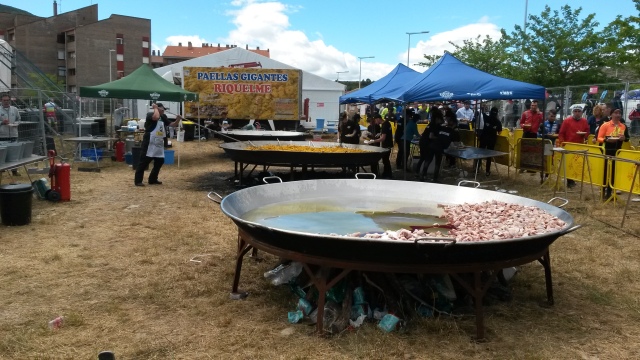