My Alpe d’Huez Fest is over for the year, having now climbed it 4 times from 3 different sides this week. The last 3 of them was over the weekend during the fantastic Haute Route Alpe d’Huez race/event. Regular readers will know this series of cycling events that gives the average poseur the chance to feel like a pro. They are still doing a good job at it, I have to say.

Here’s my decidedly non-cyclist’s bod at registration, in happier days before they made us start riding. 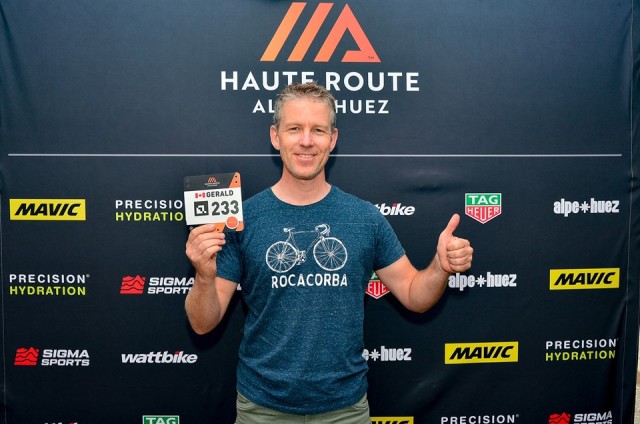 This weekend was planned as training for my main event of the summer: Haute Route Pyrenees, so I was not intending to drink at all, or at least much. But that’s before I realized that my roommate for the 3 nights – ‘Rich Velo’ – was a very bad influence. This is how we spent our post-ride days, either watching the Tour in a pub, or downing IPAs and burritos. Well, the riding was good training, anyway….

Rich, by the way, is an unnatural freak (but a lovely guy) who can manage to drink like this and still finish a high-level event in 8th place overall. I was no match for him either in the pub (a rarity) or on the road.

As for the race itself, it was most excellent, with the best weather I think I’ve ever seen in 3 consecutive days in the Alps. Stage One, the biggest, had us descend down to the barrage in Allemond then climb Croix de Fer once, go down the other side (not all the way to the Maurienne Valley) on a sweet neutralized descent, climb Croix de Fer again, then finally climb Alpe d’Huez from Villard Reculas.

Along the way I met several people that I knew, including a friend who has a house near Ventoux, a guy I know who was working for Mavic, and someone who has guided for us in the past. It sort of felt like a family reunion, just with skinnier people.

This was my best day, as is often the case, finishing 112th on the day, I think.

View from the neutralized zone

After making a fateful discovery (Smitty’s Tavern) after the stage, Rich and I ended up going heavy on Mexican food and delicious beer to celebrate our success. Strangely, I didn’t pay for it much in the morning, at least till the last climb of the day (pictured below).

Stage Two started from Le Bourg d’Oisans and immediately climbed the first few steepest kilometers of Alpe d’Huez to La Garde, where the route turns off to the right and continues climbing along the ‘eastern balcony’, a spectacular road that cuts right into a vertical mountainside, with sheer drops of hundreds of meters. I kept to the left.

After descending to the valley we climbed Les Deux Alpes through the back door, and had a neutralized descent back to the dam, where the fun really started.

I had actually forgotten that I had even climbed the Col de Sarenne before, most likely because I subconsciously wanted to erase it from my memory. Right from the bottom I started feeling ‘wobbly’ and I had a brief moment of doubt. I slowed down a little, drank, ate, and rode through whatever that was. It was a hard climb, though, and the top several kilometers never seemed to dropped much below 10% (a theme of the weekend, as it turned out).

From the summit I stopped very briefly at the feed station, asked my Mavic friend if he had any fresh legs to lend me, and rode down to Alpe d’Huez, only to have to completely bypass it and descend to the last 3 switchbacks of the traditional climb. Look at these numbers!

Try getting this amount of climbing in over 70 km where you live. I think I finished around 130 on the day, bringing my overall placing to 119. Very moyenne, but not surprising.

The last day of these 3-day Haute Route events is usually (or maybe always) an Individual Time Trial, this time up the Tour de France climb of Alpe d’Huez.

I warmed up well for this, which helped immensely, and I always felt ‘on top of the pedals’ on the climb. I even took some tips from Rich and went up without my phone, wallet, and even food. For the first time in a long time I felt light on the bike.

I even passed several people on the way up (normal, since the slowest are supposed to start first), getting passed by maybe 2 or 3. I figured I must have moved up a few places on the overall, but it was not to be, and I actually lost one placing, bringing me to 120th.

This year has been an odd one for Haute Route training, mainly because I haven’t been doing much of it. I actually didn’t ‘race’ HRAdH last weekend, treating it as the training that I so much needed. It is the first big race like this that I enjoyed riding. I even had a 2 minute chat in the feed zone one stage on a non-neutralized portion of the day, which nearly put Rich over the edge when he heard it. I promise I won’t attempt these types of shenanigans in the Pyrenees.

In other news, my weight continues to resist the 70 kg barrier, but I will definitely get that down a couple more before August. You just can’t fake it through a big mountain climb when you have extra poids.

Why didn’t I become a sprinter…?