To All l’Etapes I’ve Loved Before

If you’re a blogger you will know that retrospective articles take time, not necessarily because you need to remember what you’re writing about (ok, that too), but because unless you are very well organized, your old photos are scattered over your hard disk, in your phone, in DropBox or on your spouse’s computer. I can spend many, many minutes doing a simple Facebook post on my company’s page because of this, which I found myself doing this morning.

Which brings me to our confinements. We bloggers now have no good excuse not to dig into the archives and fish out old pics. My FB post today got me thinking that I’ve ridden or attended (as a guide/host) nearly all Etapes since 2011. Here you go!

I wrote a whole bunch about this one, documenting my training, equipment purchases and the thousands of things I learned in my first real year of road cycling. Here’s the last article I wrote after completing (barely) this short but vicious route that took in Télégraphe, Galibier and Alpe d’Huez in just over 100 km. 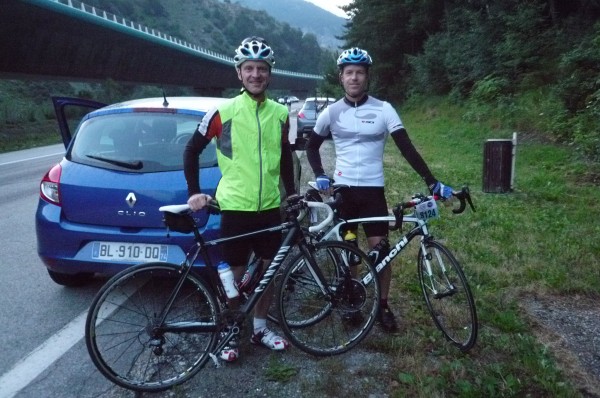 With Karsten at our morning drop-off 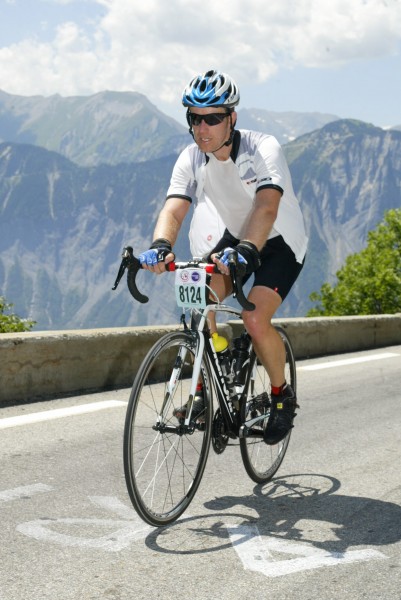 As always, a hot day on The Alpe

Memorable moment: The whole thing. This remains one of my best cycling experiences.

Two years in a row ASO decided that it’d be a good idea to hold two different Etapes; one that was bound to sell out (in the Alps) and another that was on lesser-known roads. They were getting ahead of themselves, but I thought it was a great idea and one that they could definitely bring back now that the event attracts 15,000 riders or more (9000 I think in 2011).

I did both ‘acts’ in 2012. The first was in the Alps and we started under the (lit for us) Olympic flame. 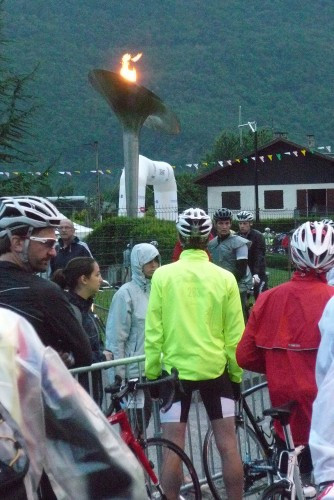 The day started off cold and rainy but it was an inferno by the time we started the last 17 km climb of La Toussuire. Before that, though, we had the Madeleine and Glandon to climb. Here’s the latter – this is when I still stopped for the occasional photo during these events. 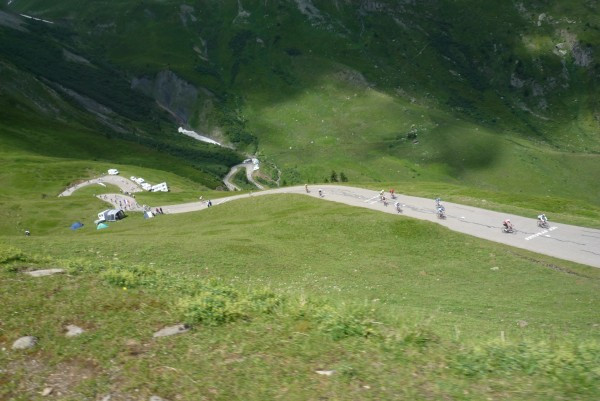 Finally, John, Erik and myself at the finish line. I’m the good-looking one. 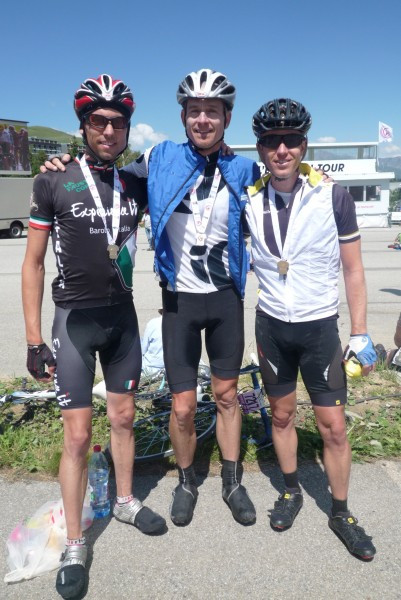 Memorable moment: Erik passing by me on the last climb and offering to ride it with me. Me telling him to piss off and let me suffer by myself (what I actually said was, ‘go ahead, man. I’m good’).

This was an absolute monster that forced us to climb the Aubisque, Soulor, Tourmalet, Aspin and Peyresourde (the famous ‘Circle of Death’) and was 201 km with over 5000 m of elevation gain. It was also atrocious weather and only 3800 riders finished out of over 4700 starters.

It was a good Etape for me, however, and I finished in the triple digits at 585th place. 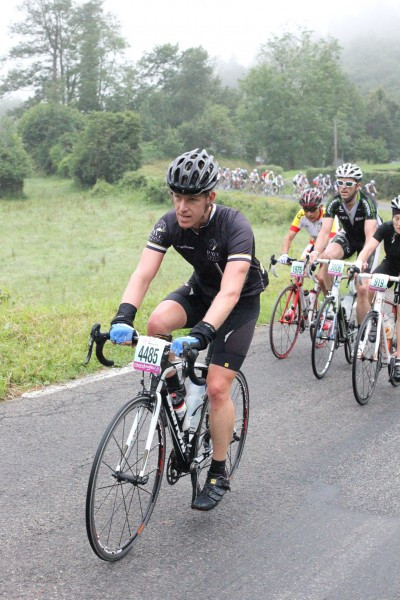 before things got ugly 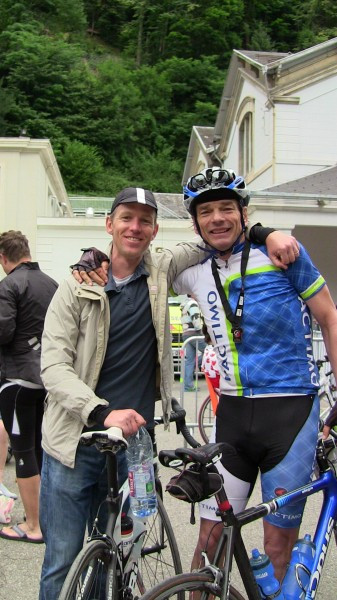 With Pierre after his first Etape

Memorable moment: Watching Pierre finish this stage. Not too long before this he was 80 lbs heavier.

Back to the Pyrenees and back to the crap weather. This one has gone down in history and people still talk about the village on the descent off the Tourmalet (Barèges) that turned itself into a triage center, hundreds of people abandoning there and having to get bused out many hours later.

I had my own adventures on this Etape, which included falling right at the top of Tourmalet on sheep shit, but ended up with me finishing in the top 10% and a fine way to end my career of Etape riding (for now).

Memorable moment: About two days later, when I finally thawed out. 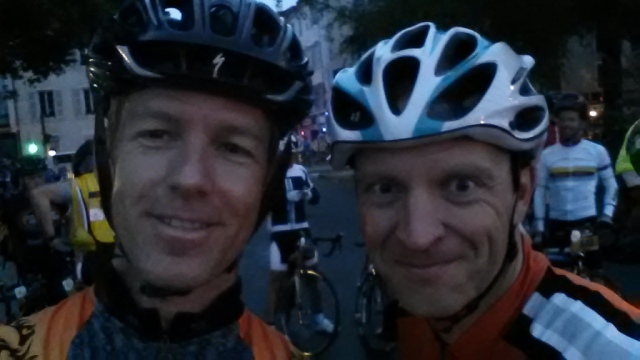 Me and Karsten, united again in the early morning 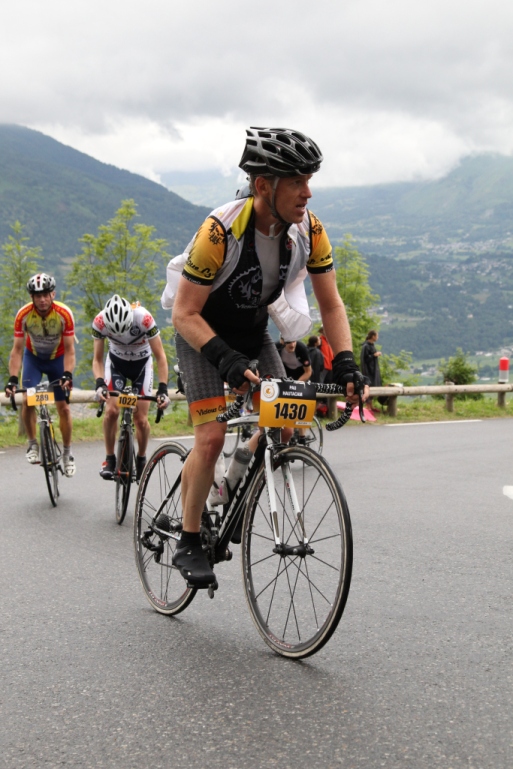 Back to La Toussuire a few years later, but now sitting on my ass in a 9-seater van, 2015 was the beginning of my career as an Etape tour guide.

Every tour we run is a challenge, but the Etape is something else. Each year the thing is in a different place, so we are essentially making a tour from scratch every single year. By now we have a ‘template’ on how to do this, but it took a few years to develop it. I still don’t know how we got all our 9 riders picked-up, fed, housed and dropped off at the airport again, but it must have worked out because we’ve been running these things every year since.

All our riders made it save one, who climbed into the broom wagon on the last climb. He ate dinner at around 11 pm. 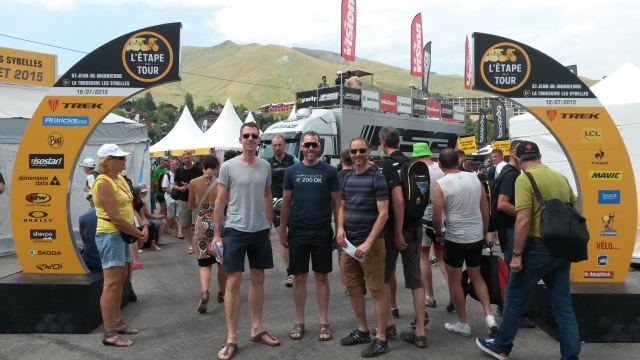 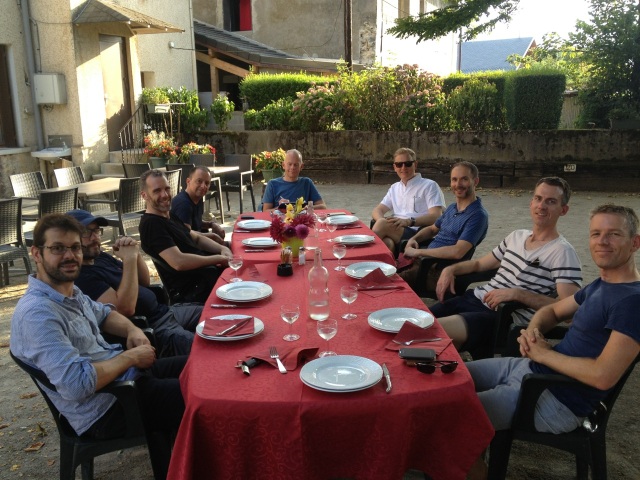 This was the first time we got our hands on a giant Alpine chalet for our clients, right on the last climb of the day: Joux Plane.

The group dynamics was wonderful for this one and this has amazingly continued to this day. This year’s Etape was marked by the deletion of one big climb due to roadworks on a landslide, if memory serves. We thought the race would be ‘easy’, but it was another scorcher and the Joux Plane was littered with shattered souls before it was all over. 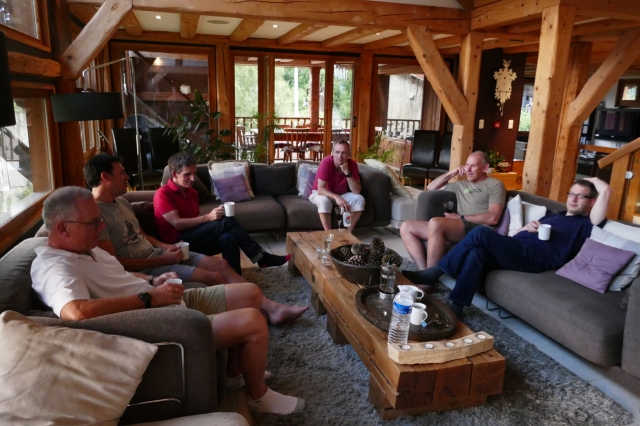 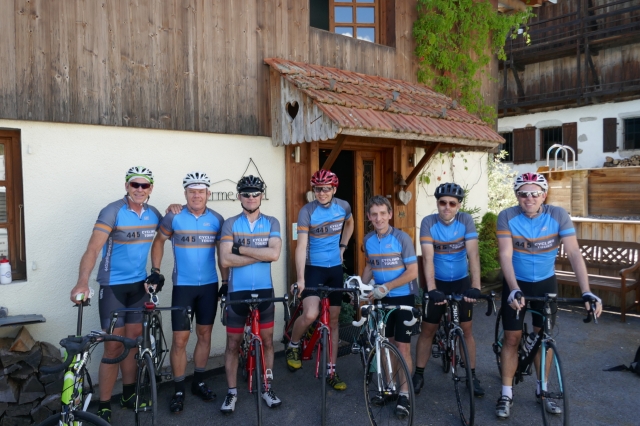 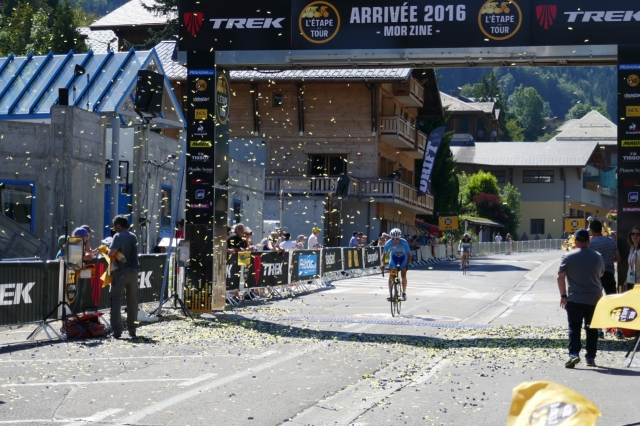 I remember this year we got very lucky with our accommodation and scored two brand new chalets near the fort of Briançon, with a stunning view over the valley looking south. We were so close to the start/finish line that we didn’t even need to transport riders to/from. More of this, please Etape organizers!

It was a tough old stage and I think we had one guy who got swept up because his whole body was cramping. I’m pretty sure this is the highest the Etape has every finished, since the Arrivé was on the top of the Izoard (2360 m). All our clients needed to do was freewheel back to their cold-beer stocked chalet. 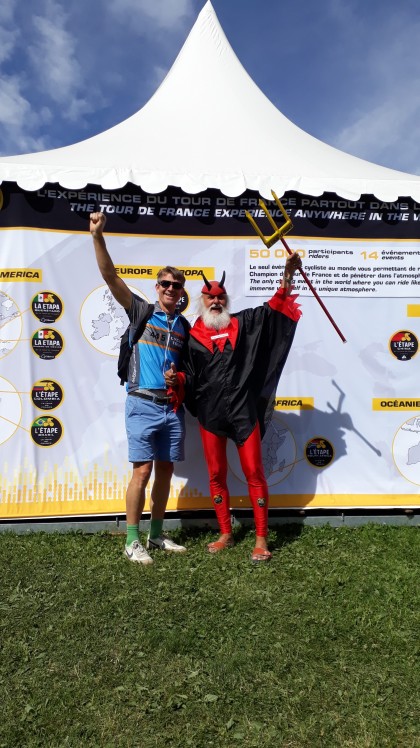 John (left) hamming it up 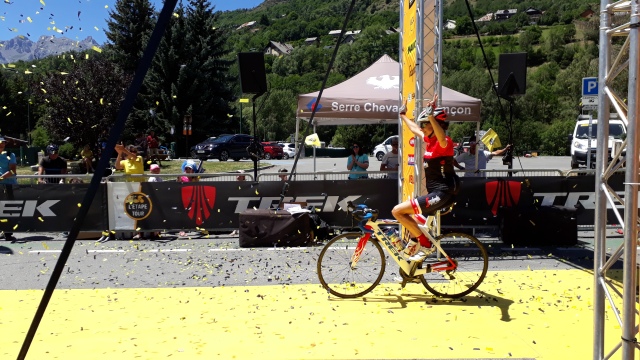 2018 saw us in yet another fabulous chalet, high above the finishing village. It was also our first year of an ‘extension tour’ of a few days of Alpine riding after Etape. We had yet another great group of returnees and newbies (Andrew below has ridden with us 4 or 5 times now), including 2 doctors. Luckily we never needed their expertise. 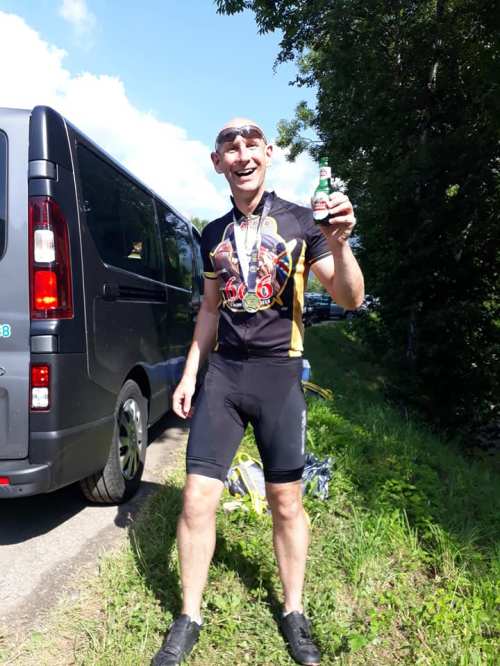 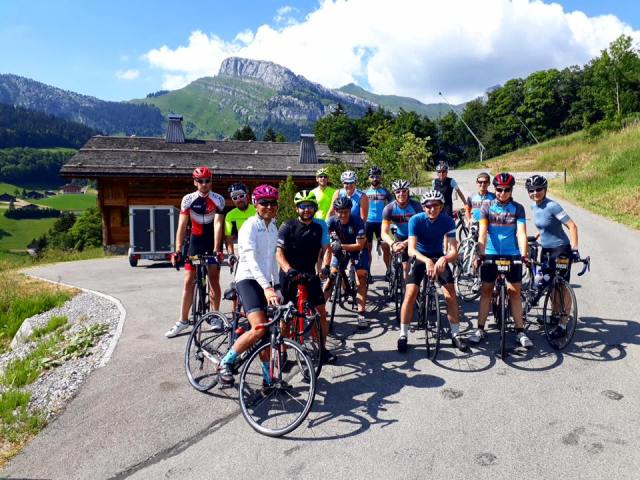 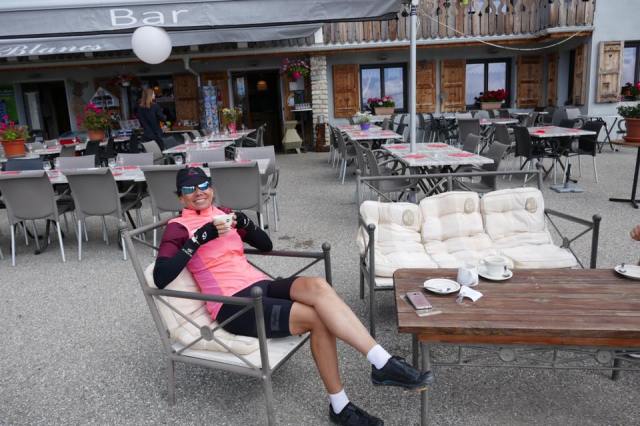 La Canadienne enjoying a cuppa on top of the Semnoz

A weird one, but only because of the course, not the people involved! In 2019 the parcours really did a lot of people in, probably because it was very hot, but also because the beginning of the last climb (36 km to the ski station of Val Thorens) happened to pass by the van (it’s an up and back climb), meaning if you were suffering as you rode through Moutiers, it might be hard to go straight when you knew a cold drink and comfy seat was waiting a few hundred meters away.

This happened to a couple of our riders and I actually had to drive halfway up the climb (after the race had finished) to pick up another. Another of our riders said that he was the last person to cross the line before the broom wagon. It was a late dinner.

But another great success and we were pampered by Chef Becky. 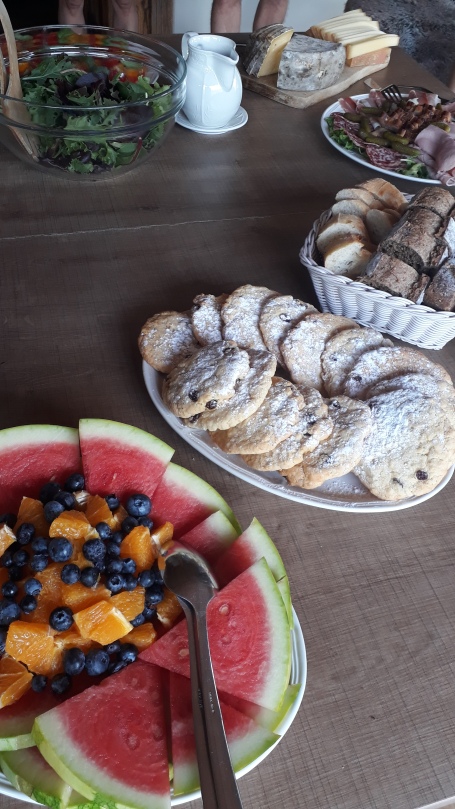 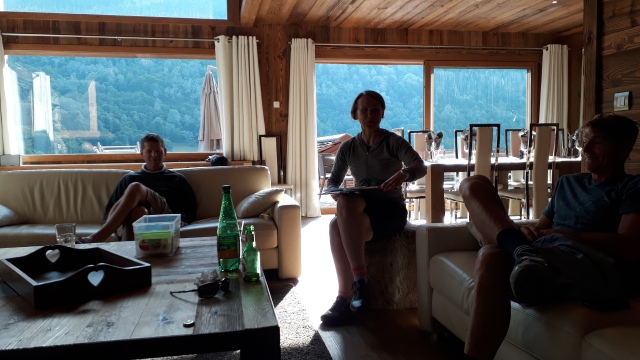 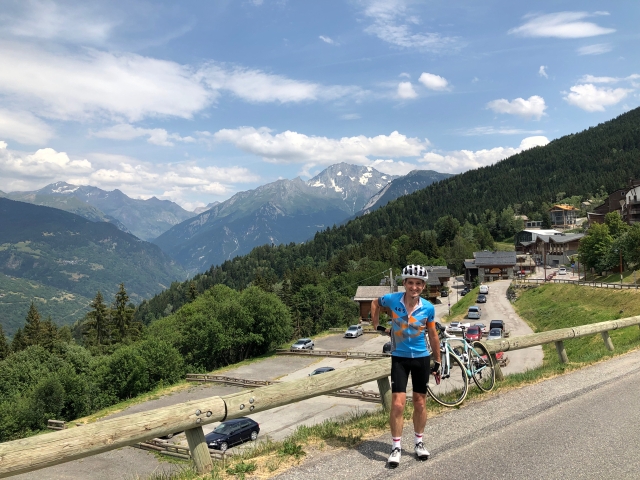 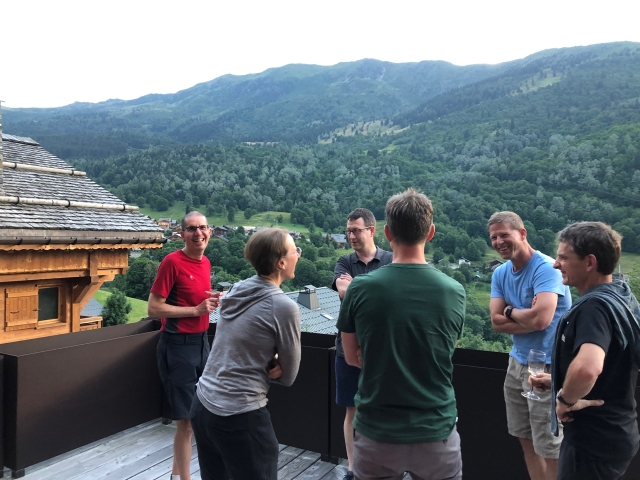 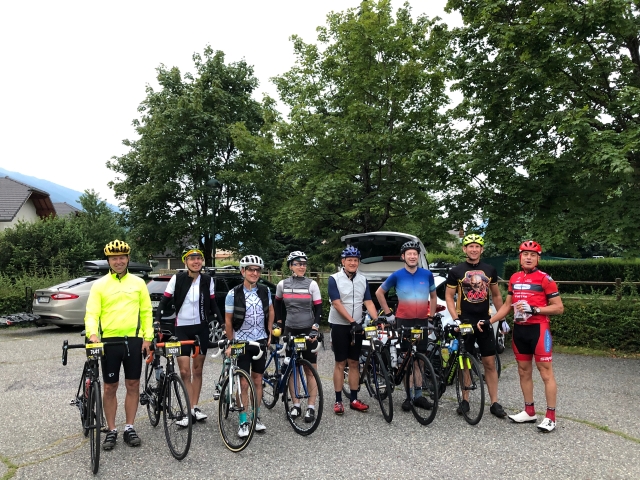 And then there’s 2020. The Etape du Tour has been postponed till further notice, probably to the beginning of September. I think there’s a good chance it won’t run at all and there’s an equally strong possibility that if it does we might be busy with another tour. If all the stars align it’ll be my…once second while I count…10th Etape du Tour!

7 thoughts on “To All l’Etapes I’ve Loved Before”