The day started at 8:30. The excuses, around 8:35. Here is a short selection, in case you are looking for any on your next big climb:

The whole punctual group met in ‘the toilette parking lot’ in Bédoin more or less at the appointed time and we got rolling just before 9am. Before our (planned) Triple was really the only time any of us thought much of photos, hence the overload of parking lot pics. 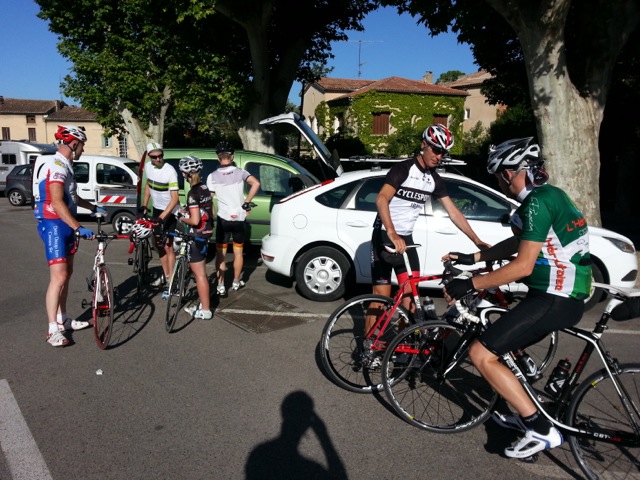 From left to right: Roan, Erik, Anne, my butt, Stephen and Mark. 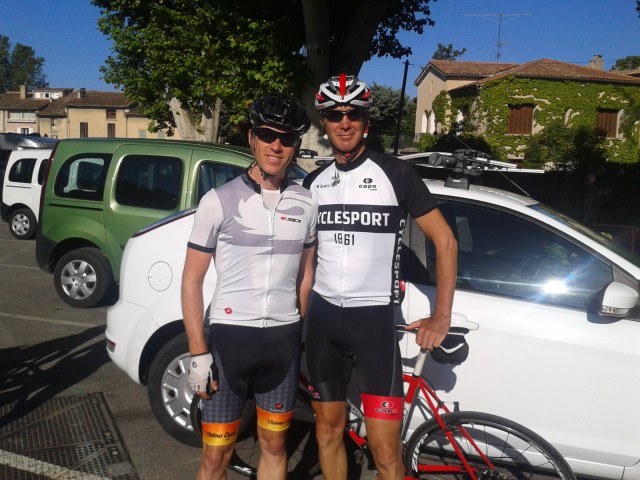 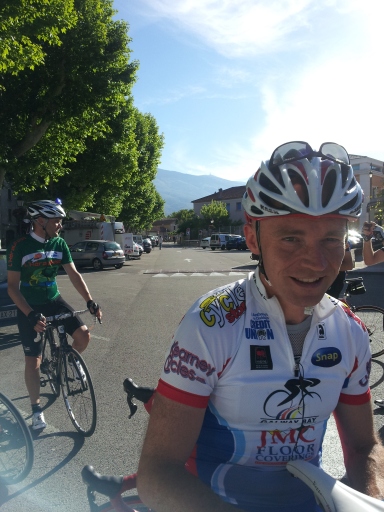 Steve with a smile on his face. With the weight of the crap he was carrying, this would not last long…or would it?

Our fearless crew at KM Zero.

And then the fun began. We hadn’t talked about how we were going to ride all day as a group, and it wasn’t long before we were stretched over the Provençal tarmac. We did enter ‘the forest’ together, though, so we could share in that sinking feeling that it’s about to get painful.

I shouldn’t say this, considering I was first up the mountain, but I wasn’t totally on my game yesterday. The sickness is done with, but my fitness isn’t quite back to what I’d like to have it. The good news is that, through the forest at least, my new 25 was giving me no grief at all. It allows for a decent cadence at 10 kph – 12 kph, which I was holding fairly well all the way. More testing will be needed though, and it’s on its way!

We re-grouped at the Chalet then shot up to the top. Steve took a few photos, or, as looks to be the case below, getting his face into someone else’s classic moonscape shot. 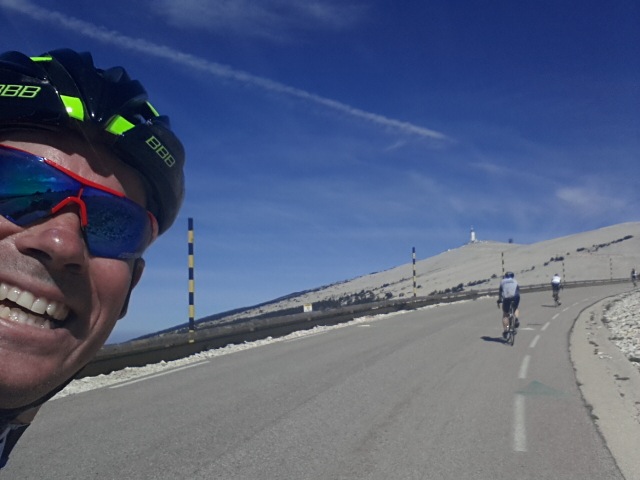 Only Steve could photobomb his own photo.

In beautiful weather, we met again at the summit. Here is a focused Anne reaching the top.

The winds were with us on the decent to Malaucène and I think I hit my all-time top speed, trying to keep up with Erik – 86 kph (53 miles). This descent is as much fun as it is torturous going back up, with lovely views over the Southern Alps (if you dare to look).

We all met up once more at the bottom and had a bit of food here. This bakery is at the start point of the climb and there is an endless stream of cyclists coming and going all day. If you like that sort of thing, it’s a great place to be.

Then the fun really began. After a few minutes bickering over which climb was the hardest, we all quickly found out (well, there’s probably still one holdout to the truth…). Of course, this was our 2nd climb of 1600 meters on the same day, so it would seem natural that it would seem the hardest. So, Erik, I’ll give you  that.

Anyway, it’s a monster, no matter which way you look at it. The climb, unlike the southern side, starts nearly immediately. It is frustratingly inconsistent in its gradient, too, so you can never get into a rhythm like from Bédoin. Then, there are two long, straight stretches of major nastiness that had one of our group praying to a god he doesn’t even believe in. Erik even stopped talking. Yes, it’s that tough.

The group re-grouped one last time at Chalet Reynard and then found this. 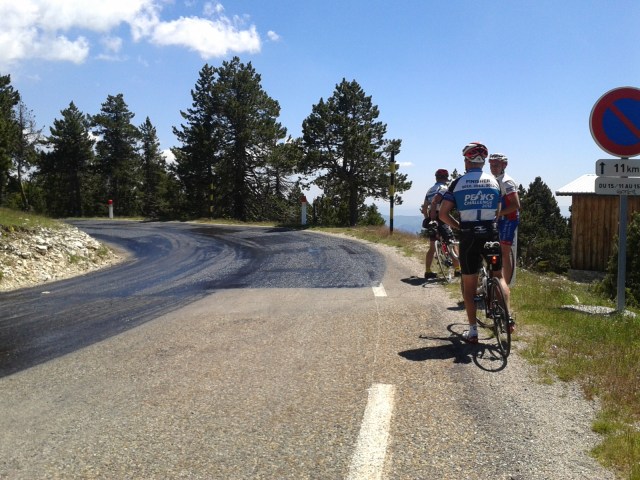 They are resurfacing this up-to-now awfully tarmacked road. It is a great idea, but I often ask myself  why they can’t think to do these sorts of things outside tourist season. Turns out that this very fresh (the truck was spraying as Roan did his push-ups below) stuff went on for 400 meters and the way around was to walk along the edge. It was decided, by a majority, to leave the Triple for another day and have spaghetti bolognese instead. 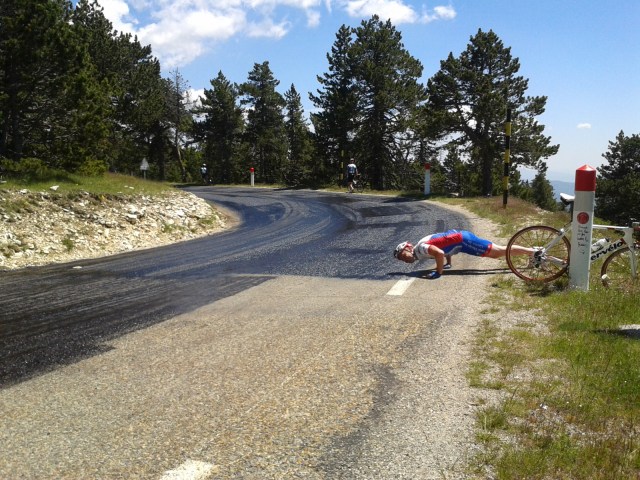 And that’s what we did. Except, the story didn’t quite end there. Turns out that Steve and Mark, holders of cards that needed to be stamped, decided to do more riding after eating a big plate of pasta. Since I wasn’t privy to the results of this move, I won’t comment on it. I’m sure it’ll go in someone else’s blog! 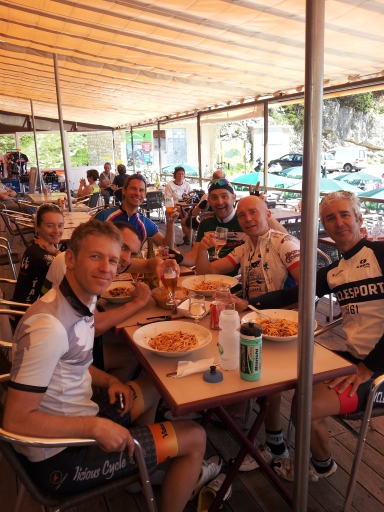 The handsome crowd, carbing up for next time.

So, Master Yoda, there was no Triple today. We tried but were defeated by the Dark Side of French bureaucratic decisions. But don’t worry. The season is young. We’ll be back.