A few words from your grateful ‘team’, Rob. 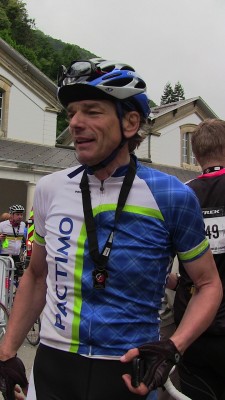 As many of you are aware I’ve been on this journey of challenging myself to see how far I can go. I kept reading Gerry’s progress report from last year’s Etape and how Rob was coaching him along to improve – or more important – to add structure to a training regimen that one could benefit from.

I had sent coach an email to ask him about food. As you know I wasn’t the fittest cycling specimen when I started last year and I was looking to see what I needed to do to get back on track. The plan was simple for me, stop eating so much and cycle more when I can and It would help me to get where I needed to go. The bigger question was what to do in the off season. I hated indoor training and could not get motivated to spend all that time on a bike trainer. I then looked at an indoor gym and a trainer to improve muscle mass in my legs – simple, I thought. Turns out I hated the gym environment even more and was never able to sign up.

After finally hooking up with Coach and putting me on a training program we soon began the long process of looking at my diet and getting me in a regular program. I won’t bore you with the details because you’ve heard it all but coach’s dedication to improving people’s overall health through diet and exercise was hard to ignore. He pushed me everyday to be better than the day before. He encouraged me and kept me motivated not just by what he said but by what he did. Not only did Coach instruct, he was actually doing the same training program along with us and he was doing it even longer. If we were doing 1.5 hours he was doing 2 to 2.5 hours.

As I was riding my Etape du Tour, there was no question about me not finishing. My thoughts were not far from Coach’s influence on my training. I watched countless cyclist’s give up on the Etape by getting off their bikes and walking, I was not going to be like them and be defeated. As hard as some of those kms were and as slow as I was pedaling at times, every pedal stroke was one less pedal stroke I had to do. I trusted the training to get me through and Coach’s words were never far from my thoughts. The route had countless fans camping and getting ready for the pro’s to do the same route 4 days later. It’s eerily quiet on some of those mountain climbs. Hundreds of cyclist’s trying to get through another km and not saying a word. All you hear is faint breathing and chains turning. I know I couldn’t have done it without a mentor and I’m glad I had one, Enjoy the ride Coach, I know I did.

If I were asked to describe Coach Rob’s personality in one word, it would have to be “passionate”. How can I make this assertion when I have never met the guy, having only corresponded with him through email and the internet? Actually it’s quite simple. Every electronic interaction I had with Coach Rob was focused on making me a better cyclist in order to complete the Etape du Tour – Act 1, by
ensuring I had the appropriate tools, encouragement and follow-up to get me
there.

Through his blog, training plan, and weekly email contact he provided the details behind what appears to the novice as being the mundane sport of pedaling a bike. His wealth of knowledge on such subjects as nutrition optimization, body positioning, heart rate training, sports psychology, and race tactics did make me a better rider. How do I know? In my first year of serious training and racing, I finished in 451th place out of 5688 riders in the Etape du Tour.

Coach Rob was behind me all the way, even if it was a long-distance electronic
relationship, with his infectious passion for the bike and all things health.

You all may know of my own Coach Rob story, since I’ve been recording it here for well over a year now. You are probably aware that Rob is my step-brother and some of you will even remember that I had never met him till a brief meeting last summer in Nice. We have gone from never having spoken a word to each other in the 25 years or so our parents have been together (because of geography, not anything sinister!), to near daily email communications on just about every topic you can fathom up.

Rob, from day one (his first email to me is an epic!), has been a fountain of knowledge and experience that I can just click ‘send’ to dip into. I’ve collected some tidbits taken from our email correspondence, but that page is a mere fraction of the great help he has sent my way. He’s got a heck of a lot to say on the topic of cycling! All this great knowledge and support he has given me has been generously and enthusiastically given, without a hint of the irritation he MUST feel when he gets yet another email from me asking probably the same question I asked last month! But no. Nothing.

One of the best things about all this stuff I’ve been learning and implementing is that it is coming from years of experience. Rob has been an elite athlete since the early 80s and still trains harder than anyone I know, or have ever known probably. Want proof? At 56, he placed 133 out of more than 2600 in the Axel Merckx Gran Fondo last month, easily qualifying for the UCI Masters World Championships in South Africa later in the year.

Rob, thanks for everything. It’s pretty cool to have gone looking for a coach and ended up with a brother to boot!