The title of this article is ‘sprout’ because the ‘seed’ was planted way back in 2011, when I was invited to ‘go north’ and spend the weekend riding Paris-Roubaix sectors and Tour of Flanders cobbled climbs.

Those 3 days really made an impression on me, especially the vicious cobbles of P-R. Since then I’ve been back to ride ‘the classics’ several times, including more Paris-Roubaix hell, a few days riding the bergs of Belgium again, plus the Amstel Gold sportive.

And now my favorite race season is upon us and a loyal client of ours casually mentioned that we should run a tour in Belgium. In the last two days I’ve essentially put together a full-week tour, with pick-up airport, routes, transfers and even our first hotel…all in my head of course; the next step is to convince people it’s a good idea.

For those who don’t know our little cycling tour company, we specialize in week-long tours that have a fair amount of climbing, more than often in mountains that see the Tour de France, Giro or Vuelta every year. We don’t call them ‘HighRoad‘ tours for nothing. 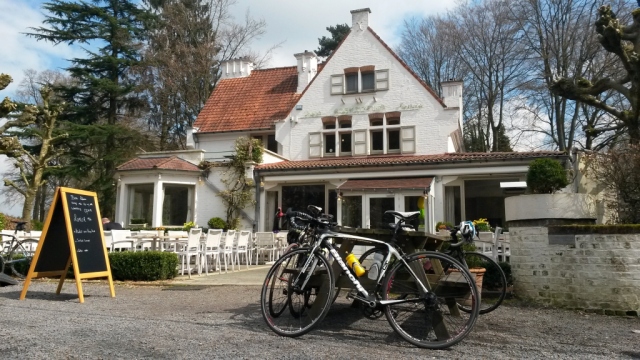 So a HighRoad Spring Classics tour would be less ‘high’ than our others and would also be quite different in the nature of the riding. Climbing big cols might involve contending with competing motorcycles and campervans, but you are usually far from civilization. In ‘the north’ you ride through endless towns and villages, interspersed with forests and fields. This raises some challenges, but brings us more choice of accommodation and eateries, which is always nice.

My basic plan is this so far:

Start north of Paris and ride the last 100 km of Paris-Roubaix, starting with the nastiest of all sectors – the Arenberg Forest, and finishing at the Roubaix Velodrome, perhaps with a visit to those famous showers.

We’d finish this day in Oudenaarde, ground zero of cycling culture in Belgium and home to its cycling museum, which has a beer hall of course.

For the next two days we ride out of Oudenaarde on Tour of Flanders and Omloop Het Nieuwsblad loops, ticking off a whole host of ‘must climb’ bergs in Belgium, including this beauty – the Muur van Geraardsbergen.

From Oudenaarde we ride east to Huy and climb the Mur de Huy, where Julien Alaphilippe has imposed himself over the past two editions of La Fleche Wallone, the first of the Ardennes Classics of the spring.

The next day I see us traveling north to Maastricht, in The Netherlands, possibly over a climb or two from Liege-Bastogne-Liege, the final Monument on the spring. We base ourselves in the lovely town of Maastricht for the last two nights of the tour, doing an Amstel Gold Race loop through the countryside of the Limburg region on the last day.

So, with a little luck and good planning, a rider on our as-yet-to-be-named-properly HighRoad Spring Classics could:

We are long ways away from this becoming reality, but we are starting an Early Interest List already. Let me know and I’ll put you on it!