Johan and David Take on Caux

Having wisely wussed out of our first programmed race of the season last month, John and I (okay, John) were looking for something to test our legs on before the first big sportive hit us in April. As it turns out, our friend Mark was searching for victims to fill up his village’s annual categorized race – Les Boucles des 4 Clochers.

Here I am, looking a little Dante, trying to figure out how and where to attach the electronic ‘puce’. 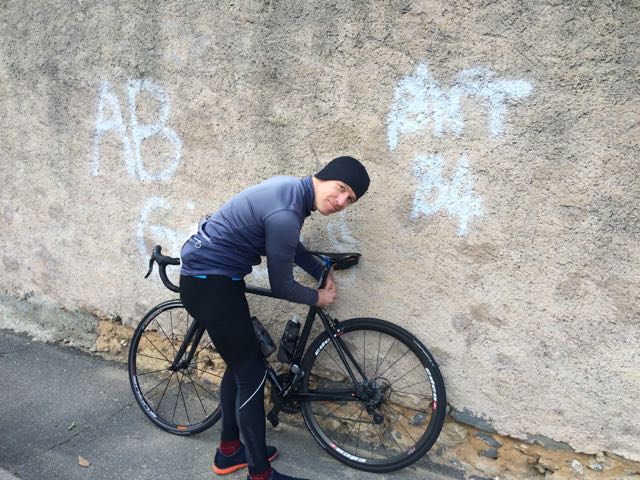 This race was licenced, and not possessing one, John and I (known in Caux as ‘Johan’ and ‘David’ for some reason) were put in with the Cat 4s, or so we were told. Come race day we found ourselves in Cat 3. No problem, we thought, since Cat 3 and 4 will start together – it’ll come out in the wash. But Caux had other ideas and they changed the pens at the last minute to have Cats 1, 2 and 3 start together, with Cats 4 and 5 five minutes later.

But we were there for the workout and anyway, how bad could it be? But before you get the horror of it all, I’d like to introduce you to Rob, a fellow Canadian who runs a B&B in Malaucene. He’s also a National Masters Champion and general monster on the bike, finishing in the 2nd group on the road.

This photo, generously supplied by Maryka, Rob’s wife, shows the start line flags in the background. By the time we hit the village limits a couple hundred meters down the road, my heart rate was maxing out and I didn’t even want to see the power numbers for fear of giving it up right there and then.

The race had 4 loops of around 22 km, with a 3 km climb as the main test. Oh, and the Tramontane that was blowing a gale right in our faces on the approach. Actually, after the initial blowout from the start line the race slowed right down, most likely because none of the strong guys wanted to pull into the wind before the climb. John and I started thinking that ‘this isn’t too bad’…till the strong guys decided to actually ride.

On the first climb up the 3km Col de Neffiès my average power was 316 Watts, with many bits and pieces well over 400. Right after a giant effort of 500+ Watts my power line goes flat, back to what I can actually hold up a climb like that. And just like that my peloton left me.

‘Johan’ was still hanging on for dear life and I was happily not the last guy to be spit out, so I could find a couple of riders and suffer with company till near the end of the first lap, when the front of the  Cats 4 and 5 caught us. The power in numbers.

On the 2nd time up Neffiès I lost that group, too, having burned my matches on the first time around (or so I am telling myself).I again found 2 or 3 riders to pull with and we struggled past the finish line and up and over that damned col again.

By now my optimism had overcome past miseries and I was regaling the fact that I was the strongest of our tiny group. As we passed the arrivée the 3rd time I even got a ‘merci’ from one of the riders who I’d pulled for the last lap and a half.

And at around the same time I heard ‘there he is’ and ‘Gerry!’, probably spoken by Maryka and John, and these were the last words I heard till the two little siblings in matching red at the top of that damned col gave their second-to-last (there was one rider behind me, I think) ‘allez!’. I especially appreciated these children because on this last, lonely lap (the guys I were with before were in Cat 4 or 5 and only had to do 3 laps) I never saw a soul – even the marshals had abandoned their posts, prematurely I was thinking.

But the finish line was still up and running, at least, and I got an official time and placing. The old man officiating unceremoniously asked me if there was anyone behind me. I told him that the roads looked good and clear to me and where was my free bottle of wine anyway?

I’m drinking it now, so please forgive any spelling mistaakes…

15 thoughts on “Johan and David Take on Caux”