Thanks everyone for your helpful advice on my dilemma yesterday. Without exception I was advised to go out and get some sun instead of staying in to watch a bike race. I appreciate the words of wisdom, but I didn’t listen, I have to admit. To make up for it I went for a 5-hour ride in the Cévennes, the first of hopefully many 44|5 Strava group rides we’ll do throughout the year. While we’re on the subject, you’re welcome to join our club on Strava.

Back to today. The aim of the ride was to climb to the Chateau de Portes from 3 roads, with a few extra cols thrown in to keep us honest. We were feeling so fresh on the first pass that we didn’t even stop to take a photo; the one below is from the descent into the Land That Time Forgot. For those who have an idea where I’m writing about, that’s Mt. Lozère in the arrière plan.

John, having whipped out the camera first, was obliged to take the totally un-staged photo below of Anne and myself. 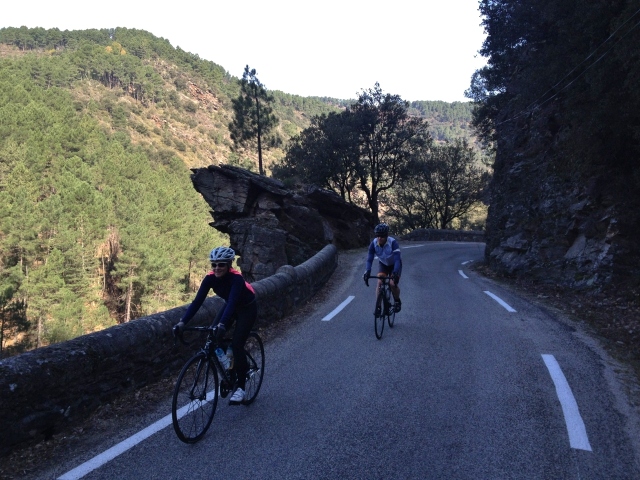 After a really nasty bit of 15%-20% climbing, and a ride past Anne’s grandma’s birthplace hamlet (‘what’s left of it’), we saw our castle for the 2nd time. 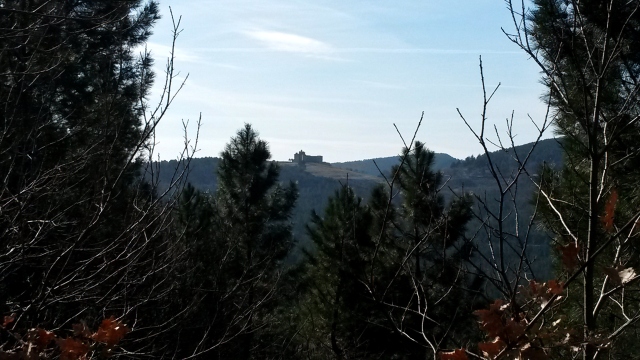 The ride from here to the chateau was a real joy, following the ridge you see to the left. The views over the high Cevennes was nearly worth the battering our legs took on the earlier part of the climb.

This time we rested, scared away some sheep, and took a photo.The rest of our ride didn’t involve photographic evidence but it did include getting lost (my fault – I made the route), plus climbing at least 3 more cols, including our final one up to the castle. We ended with 115 km and between 2300 m and 2450 m of climbing, depending on who’s Garmin you believe.