I’ve been meaning to write a post about riding partners for some time now, but I haven’t had the guts to dive into it properly. I still don’t, because what I really want to talk about is what makes riding with someone so different and special and to do that would take too much deep thinking this close to the holiday season. Instead, I’d like to highlight some of the people I rode with this year and why I appreciated it. Friends, I am putting you in a completely random order, so no hissy fits because you weren’t first…or last.

For all the years I’ve known Karsten (going on 20 now), and the fact that he was one of the engines that propelled me into riding like I mean it, we have not ridden very much together. This year we put a stop to that when he came down for the annual Cantal Freeze-your-arse-off Camp. We had 2 or 3 rides together this weekend.

Karsten is the most easy-going German you’d want to meet, so he’s a joy to ride with. He does ask ‘when’s the café stop’ a bit too much, but nobody’s perfect. Here we are at the Etape du Tour this year, not riding together again, since we were in different starting pens.

I haven’t really seen much of Erik this year, and it’s not only because of his fashion sense (see headgear below). He hasn’t ridden that much this season, so I haven’t had the joy of listening to him tell stories while my heart is pounding out my mouth.

Erik is one of my favorite guys to climb with because he’s so damn skinny and therefore fast. He also doesn’t mind putting the hurt on either, and is notoriously hard to read. I only know he has blown up when he tells me he’s blown up. Unlike me who silently sinks back down the mountain in shame. I hope he’s back next year to torture me some more.

Just when I thought Haute Route was something, Anne went ahead and did the Corsica version of the Cents Cols Challenge this year – 100 cols in 10 days. Obviously her game has been good and truly upped and there is not much waiting for her at the top of climbs anymore.

Anne is usually our road captain when we ride. She nearly always creates our routes, brewing up lovely loops in the Cévennes that always have a bunch of climbing. Oh, and she’s doing the CCC again this year, this time in the Pyrenees. We’ll both be training hard next year, so I’m looking forward to more of her diabolical circuits in the hills.

Pierre (formerly known as Peter) is another one that I haven’t ridden with much, even though it was a ride with me here in Le Sud that started off his amazing weight loss. We did get the chance this year a few times, however, most notably in Quebec of all places. On the first day of my ride from Montreal to Gaspé he joined in for the first 200 km.

Pierre is a good conversationalist and is very polite to impolite drivers, which reduces your chances of getting run over substantially. He is also generous. After taking the intermediate sprint before lunch on our Quebec ride, he allowed me the final one to the B&B. 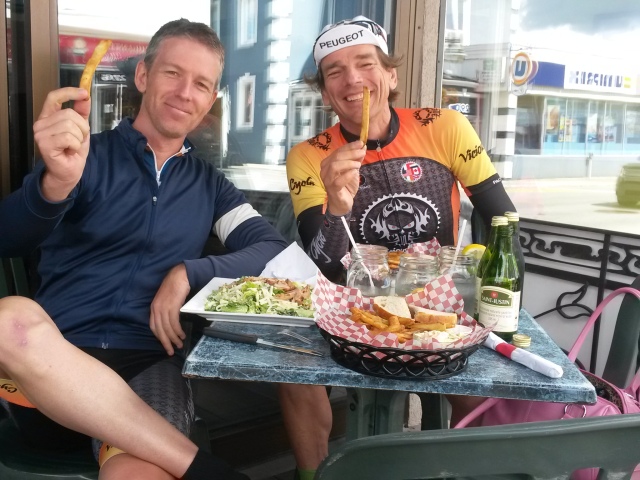 I must thank Rebecca for Stephen, since she was the one who told him to read my blog a few years back. He has now turned into a good friend and gives me another reason to look forward to summer, when he and Rebecca come to town. We always get out for a few rides when he’s in Le Sud, usually starting with a conversation that goes something like this, ‘Let’s just go out easy…’. Famous last words.

Stephen is a strong rider and has many more years of experience than me in this game and is a wealth of knowledge. He’s also pretty damn funny, so when we are riding at a pace where we can both talk, I’ve usually got a smile on my face. 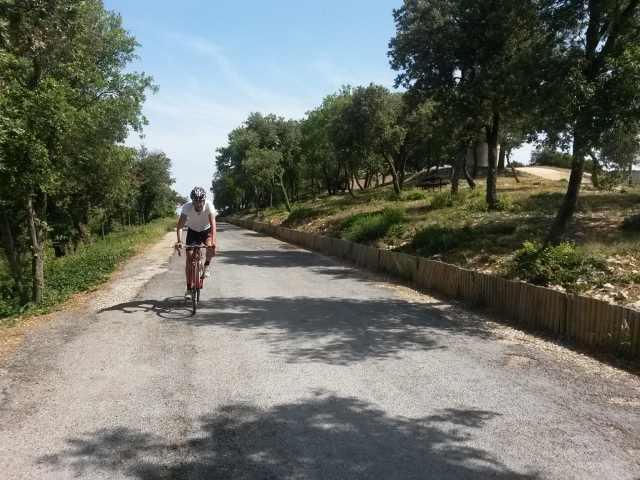 And then there’s John. John is my partner in 44|5, as you all know, but he’s also been my main riding buddy since I started training in 2010. We usually get out once or twice a week, all throughout the year, and have ridden together all over the south of France.

John has one speed – ‘GO’, so I always get a workout when we ride together. He is also bigger than me, and doesn’t seem to mind riding on the front, so plenty of room to hide, too. Even though we’re on the phone for hours on end each day (just ask our wives), talking business, there is never an awkward silence riding with him and we just find ourselves talking about something else. We are pretty evenly matched, too, which helps a lot, and we can push each other from time to time. He’s got more years in the legs, but I’ve got youth on my side (1 year!).

Sorry if I missed anyone. I did, of course, ride with plenty of other people this year, including 50 or more tour clients, but I’m pretty sure I got the ‘core’. Thanks for the ride and looking forward to more next year.