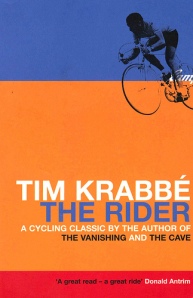 I’ve just finished reading The Rider, by Tim Krabbé, for the 4th time and thought I should finally write  something about it. This classic novel is – if reading frequency is any indication – my favorite cycling book. It is the story of a Dutch man, racing at the amateur level in Le Sud (actually, just up the road, so possibly another reason I am so attached).

The ‘rider’ is taking part in a fictitious local race called the Tour de Mont Aigoual and, in fact, the race takes up nearly the entire book. Interspersed liberally between climbs, sprints and descents are memories of his ‘sporting career’ (reminiscences of his childhood, plus lots of flashbacks to previous races  – which he has studiously numbered) and stories of the cycling greats of the time. The reason I keep coming back to The Rider, though, is the reason we read anything more than once, I suppose. It’s just very well written…or I should say, it’s very well translated, since the original is in Dutch. Here are a few random examples:

This is the first page of the book, which is greatly visual, but also sets the era we are taken back to. Can you imagine doing this today?!

‘Between the bumper of his car and mine, a rider in a light-blue Cycles Goff jersey is sitting on the curb, deep in thought. Before him on the street lies a back wheel, beside him a wooden box full of sprockets. His gears: he still has to decide which ones to use.’

Here The Rider is contemplating the race ahead of him near the end of the first climb (out of the Gorges du Tarn, for those who know the area). I can’t count the number of times I’ve felt this way in a sportive.

‘It’s so incredibly pitiful that I ever wanted to to do this, but now I’m stuck with it.’

And some good writing, backed by the certainty that this guy has ridden a lot. How many of us can relate to this?

‘Suddenly I know I’m going to attack. The decision catches me off guard. The way you can mull endlessly over getting up in the morning – and suddenly find yourself standing next to the bed. Your body got up, and you were in it.’

This is after losing to a younger (‘he doesn’t look any more tired than any of the others around him’) opponent in the sprint. He knows he has put more of himself into this ride than the boy has and he still comes 2nd.

But Reilhan has beaten all of me.’

Get this book and read it at least twice. Unlike the rider in the story, it gets better with age.

Postscript: another reason I read this book again is because our HighRoad Cévennes tour will be takes in many of the same roads as this race (including that first climb). If you’re keen on riding in the footsteps of The Rider, let me know!