The Pointy End of Mediocrity

Today saw just about every expat cyclist I know down here take part in the ‘Roger Pingeon – Heraultaise’, a well-established sportive named after an ex-pro French rider who, presumably, was there today. I was too busy remembering how to pin my bib on my jersey to be bothered, I’m afraid. I didn’t do a very good job of photo taking today, either, mainly because of the world of hurt I was in afterwards. Here are a few from John’s camera to save the day.

This is Steve ‘VeloRoo’, John and Anne, on a beautiful morning (it got up to at least 25C on the ride) in Le Sud. 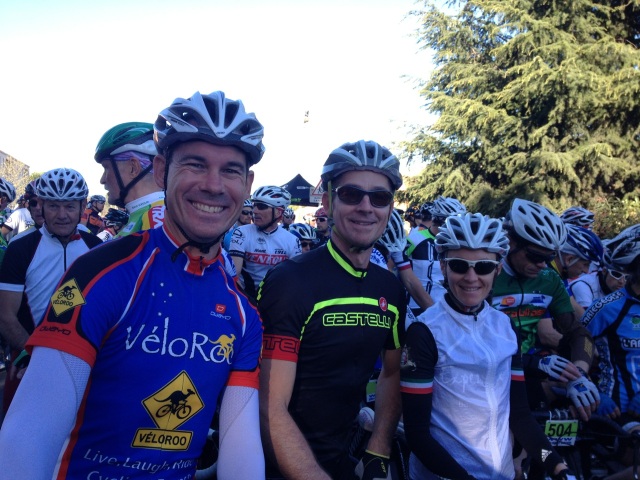 Note: I know more expats than this. They were just nowhere to be seen.

Next, me. I don’t know where that cheesy smile came from, but there are none with no cheese, so it stays.

This is a man from Belgium (‘The French part, like Gilbert’) who I thought had more than a passing resemblance to Eddy Merckx. When I told him that we became fast friends. He told me proudly that Eddy and him are the same height and that Eddy is not really Belgian, since he comes from Brussels (‘neutral territory’). He also told me that French must be an easy language because even Belgians can learn it. Belgians even take pot shots at Belgians! I’m liking these people more and more.

And then we were off.

The race began, as they always seem to – far too fast for my liking. But there’s nothing to do about it; if you don’t go into the red at the start, you’ll be quickly spit out the back for the rest of the day. So we gunned it, me in front and John (I learned a bit later) keeping a close eye on me behind.

I think my placing was around 170 out of 400, which I’m pleased with considering my extra baggage (still 71 kg ‘somehow’) and epileptic training this winter/spring. I think I might be able to chalk this up to a) I still have last year in the legs and b) the workouts I’ve been doing with the power meter are more precise that the ‘analog’ heart rate ones of the distant past (before Christmas). My biggest fear today was not having the juice to push through to the end. The longest ride I’d had till today this year was 75 km and the sportive was nearly 140. It hurt a lot, don’t get me wrong, but I finished and even had a cheeky sprint on me at the end. What I want to say is that it’s really true that ‘miles in the legs’, both micro and macro, is really a truism in our sport.

Yes, there were a few dicey moments. Yes, not everyone was paying 100% attention 100% of the time. However, the cyclists I rode with today knew how to ride, knew the rules, and treated each other like comrades, instead of enemies. Today was something special because the many riders hiding in the back of my group never even attempted the tried and tested sprint to the line ahead of those who did all the work (granted, this is their right – it’s just dickish). When it’s mid 20s in April, I guess it brings out the best in people.

The bunch I ended up with today was good, as I said, but it wasn’t full of strong riders eager to take long pulls at the front. This hampered things a lot, and we spent a good amount of time going slower than we should have. I tried to stay back today (this was the plan, since I didn’t think I’d make the distance otherwise), but I just couldn’t stand it and took my turns at front when it all got too much. I also found myself at the front on the few climbs that we had, which both surprised and depressed me, since whoever I dropped on the ascent, seemed to catch up on the flat afterwards.

They aren’t up yet, but John finished ahead of me by a minute or so, having lost his group somewhere in the garrigue. Anne was the only woman in her category, so she did pretty well…but also came in somewhere around 230th place overall, which is fantastic (very, very few women today). Our other friends have their own stories, but they’ll have to get their own blogs to talk about it. I need to watch the Tour of Flanders that I missed today.

I’ve got tomorrow off, then only 2 days of training before my last knee shot on Wednesday and then nothing till the Saint Tropez Gran Fondo on Sunday. It’s not a lot, but I’m hoping today gave me the jump-start I needed for my ‘spring campaign’.

13 thoughts on “The Pointy End of Mediocrity”