Warning: regular blog readers, you are about to see parts of my life that aren’t related to cycling (there aren’t many, mind you…). If you aren’t interested, wait till my next blog post!

I’m not sure why it is, but these Wrap-ups are getting more and more challenging to do. I think it’s possibly because, in the Facebook and blogging era, most of what I compile here won’t be ‘news’ anymore. So, please excuse me for not doing anything you didn’t already know about. I’ll try harder next year.

Because my memory has never been very good, if you and I met this year without photographic evidence, you may not show up in this Wrap-up. Luckily I am pretty quick with the smart phone camera, so there’s a good chance you are here.

Below are two new friends (Ryuichi and Tsunehito) from Japan who visited the south of France this year. They both ‘ran’ (I think there was more drinking than running, from their account) the Medoc Marathon before coming over our way. We met up in Avignon for a nice little Corsican meal and a basically-successful chat in three different languages.

I think we’ve had family visit us every year we’ve been in the sunny south of France. I wonder why that is..? We’re not complaining, though – it saves on flying back to Canada to see them. Here’s Susie and Scotty, with Dinah and Richard, displaying how surprisingly cold it can be along the Mediterranean in May.

Not really visitors, since they come every year and stay as long as The Metropolitan Opera will allow, Stephen and Rebecca definitely deserve a place here. Stephen is one of my summer riding buddies and Rebecca is a wonderful cook who doesn’t mind that 2nd glass of rosé. Could there be a more perfect couple?

Mom and Tom made another visit in 2013, too, meeting me in Nice at the end of a week-long cycling race I was trying to finish alive. Here is Mom on a steep street in Le Panier, Marseilles, proving that she’s still got some legs at 82.

And the two of them, doing what you do in France. 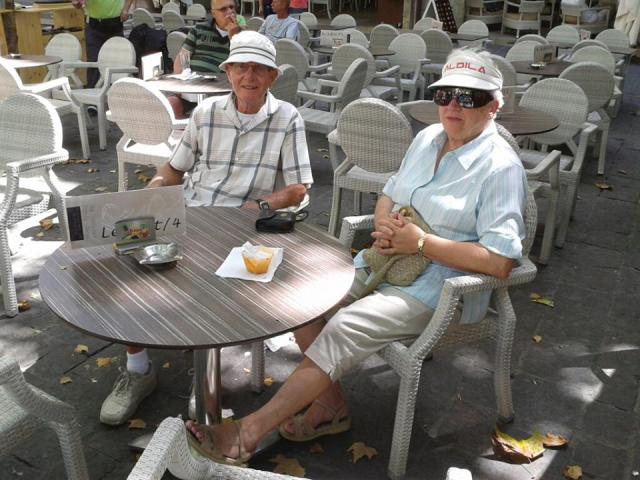 Proving that the virtual world most of us live in can sometimes cross over into reality, we got a visit from Tom and Ally (aka ‘Mr and Mrs Tootlepedal), who were kind enough to take one of my self-guided tours, and Susan, an intrepid France-by-bike adventurer who I’ve ‘known’ for a few years now, but never had the pleasure of meeting till this fall.

This next face has been around for some years, but appeared much more in 2013. John is my partner in the cycling tour business and my main riding buddy here. We have grandiose plans for the business so, with a little luck, you’ll be seeing more of his mug in years to come.

Below is my step-brother Rob. Rob is also my coach and, although in his late 50s, is one hard-ass athlete. More on him later, but although I have included him in ‘Faces’, it’s only because I didn’t have an ‘Asses’ segment, since that’s what I saw most of as I tried in vain to hold his wheel on our 7-day race through the French Alps last summer.

I’ve had the great pleasure of giving lots of tours of various lengths and sizes this year, and have met some really great people from all over the world in the process. Cycling Languedoc has welcomed riders from The US, UK, Australia, Canada, South Africa, Holland, and the most epic of them all, Colombia (below). I had a feeling that making my hobby my business could be fun, but I hadn’t thought about the fringe benefit of making lots of like-minded friends.

I’m typing this in Japan, by the way. This is my first trip back since 2007, so I’ve been spending a lot of time reconnecting with old friends and colleagues. There are many, so I’ll just post a representative photo of Nigel (and Maki and Kei-chan), a good old friend from my teaching days…and a cyclist, of course. This is as close as Kei got to me the 3 days I spent with them. I haven’t lost my way with Japanese girls, it seems. 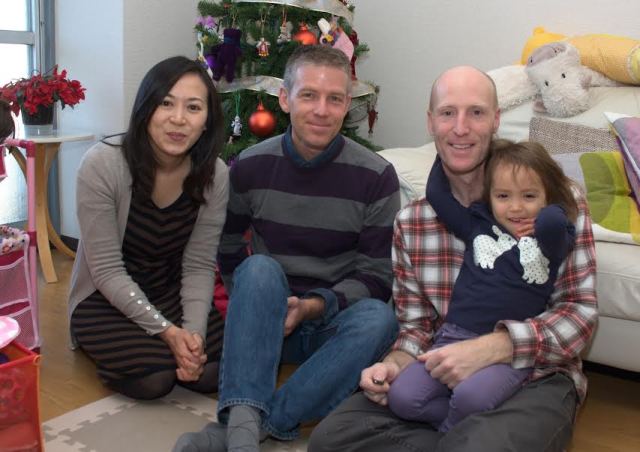 Other than the trip I’m on right now in Japan, we happily stayed close to home for most of our travels this year. Below is really close to home – a 20-min walk in fact.

A little further away, but still nearby, the walled crusader town of Aigues-Mortes is always a hit with visitors, and we brought Susie and the crew here in May, I think.

We’ve been making regular trips to Marseilles this year because it’s such an interesting place to be, but also because it was the European City of Culture this year, which meant a general clean-up and a couple of new museums to visit. The building on the right is one of them – MUCEM – the only national museum in France that is not in Paris. To the left is Fort Saint Jean, with a very cool concrete walkway connecting the old with the new.

This is not Marseilles, but close by – the Calanques.

After 21 years I have a car again and it has opened our world up considerably. Toulouse is now a long day-trip, for example. Below is the nave of Romanesque Basilica of St. Sernin, going about as high as you can without a flying buttress. 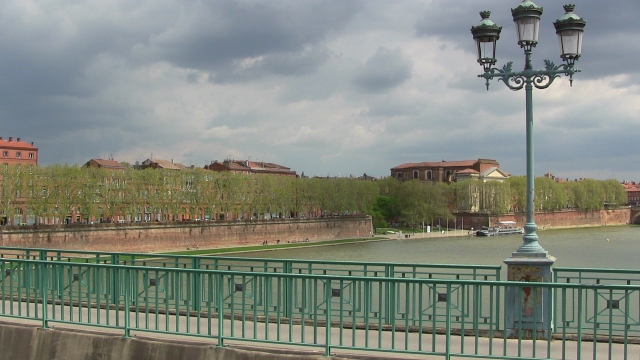 The car also took us to Venice; our first trip there. It was a bit of a shock to the system, arriving on a day when 7 or 8 cruise ships decided to dock, but the place grew on us and we found some quiet streets away from the hoards of the wrong kind of tourist. Favorite quote from this trip: The gondola rides here are good, but the guys don’t sing, like in Vegas.

The Tour de France always comes near home and Shoko and I made our way out to see it, as usual. Here is the peloton flying through Provence on a hot, dry Mediterranean day in July. In case you’re wondering, no, it doesn’t get much better than this. 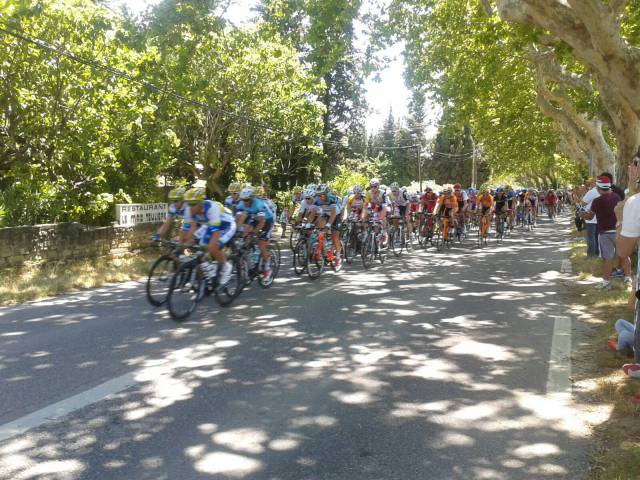 And of course Japan. Tokyo was a difficult place to live for me at times and I was not expecting to enjoy this trip much, to be honest. However, I’d forgotten how much history I have with this country (I lived here 9 years) and I still have a surprisingly large number of friends here. I’d also forgotten how kind people are and also that I could still speak the language (sort of). This trip has been a nice reminder that I have another ‘home’ to go back to.

Well, not really ‘races’, but ‘cycling’ doesn’t rhyme with ‘faces’ and ‘places’. It’ll have to do. 2013 saw me ride farther and harder than I would ever have thought possible just a few short years ago. I don’t have all my stats here with me, but I think I clocked up 15,000 km this year. 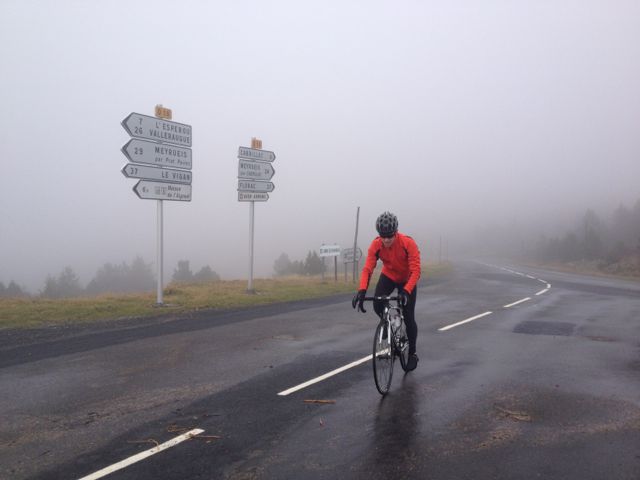 Somewhere in the middle of Languedoc 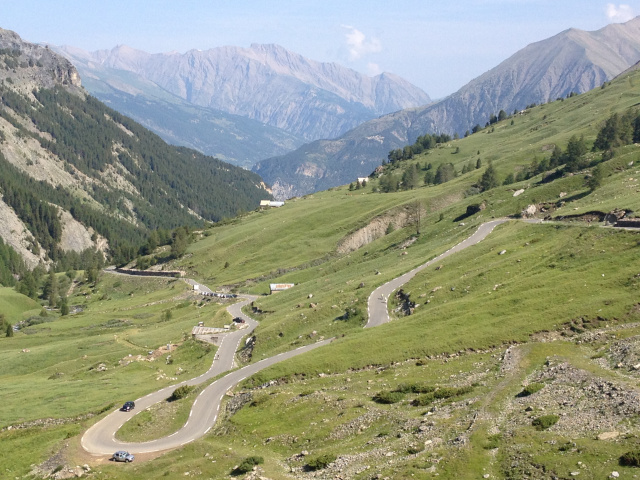 With Erik and Anne in our local hills. 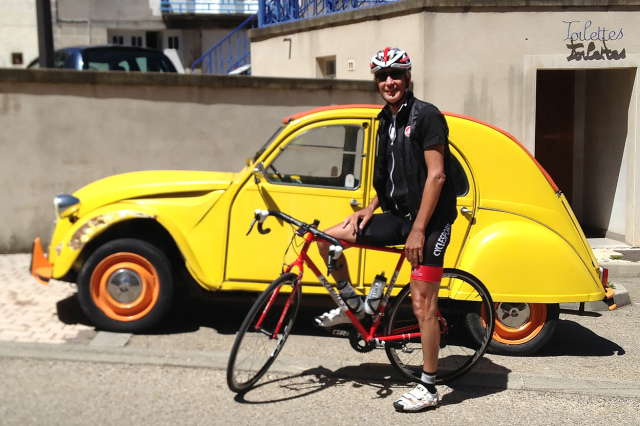 Stephen and a yellow car.

All smiles (it’s always like that before the climb)

The origins of this next idea are lost in the mists of my memory, but needless to say, whoever came up with it probably practices self flagellation in his free time. My main cycling goal for 2013 was a 7-day event that runs from Geneva to Nice, covering three countries and cutting straight through the French Alps. The race was over 800 km long and had us climb over 20,000 vertical meters. Possibly this means nothing to you. Just be impressed…it’s a lot!

Rob, my long-lost step-brother, and I, formed a team of like-minded maniacs through my blog and ended up with a great crew of guys from Canada, USA, Scotland, Holland and Ireland. We named ourselves Vicious Cycle, the name of my blog, but also quite appropriate when talking about the hobby of road cycling, once you are good and truly sucked into it.

Before the sh*t hit the fan – Geneva. 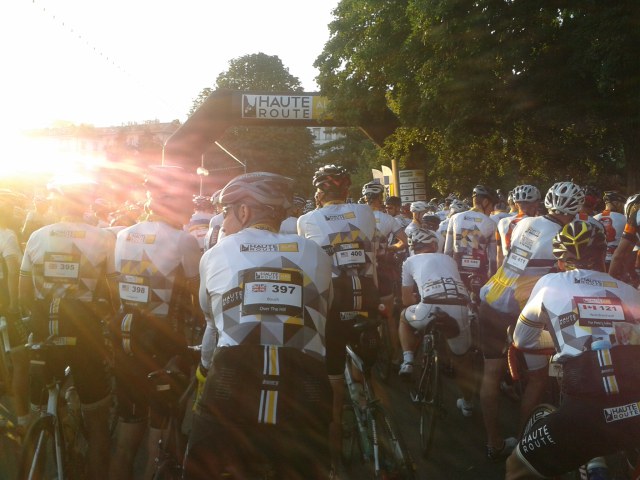 The most amazing action shot I’ll ever have taken, I’m pretty certain of that.

Haute Route (the race’s name) is really an arena for middle aged men and women (with exceptions on both ends of the age scale) to experience a little of what it’s like for pros in the Tour de France and other ‘Grand Tours’. An Individual Time Trial up the highest through-road in Europe helped bring some authenticity to the event. We even had the guy doing the last 5 seconds of the countdown with his fingers. Very pro. This is me, starting the hardest 1.5 hours I’ve ever spent on the bike, with Rob in the starting pen right behind me.

Our team finished well up in the rankings, thanks to our Irish watt-producing machine, Mark. Rob and I also did well, finishing next to each other I think, around 123 and 124 out of 600 riders. It was an incredible event and I’ve written extensively about it in the blog already. If you’d like to see more just search for ‘Haute Route’ or go to August in the drop-down menu to the right.

Cycling Languedoc, my little bike tour business, took a turn this year and I now have a partner – John. I’m not sure how I compliment him, but he certainly brings some very useful talents to the table. He can whip up quite elaborate spreadsheets in no time, for one, and has brought words like ‘database’, ‘agenda’ and ‘organization’ to my world. He’s also a good friend and a strong cyclist, which doesn’t hurt either.

We have given many more tours this year than before, getting to know some great folks in the process. Here is a small selection, plus a few other random shots from our tours. 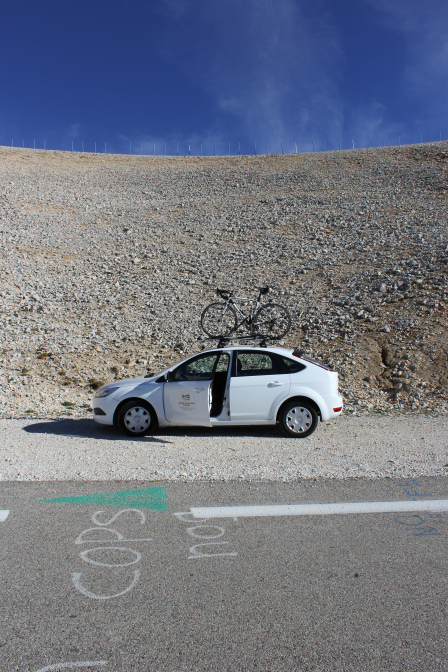 We are happy to go ‘light’…

Rob and friends from California 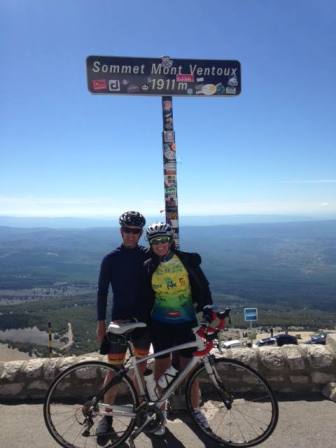 We helped Simon complete his dream of a Ventoux Triple.

Terry and Debbie from Seattle 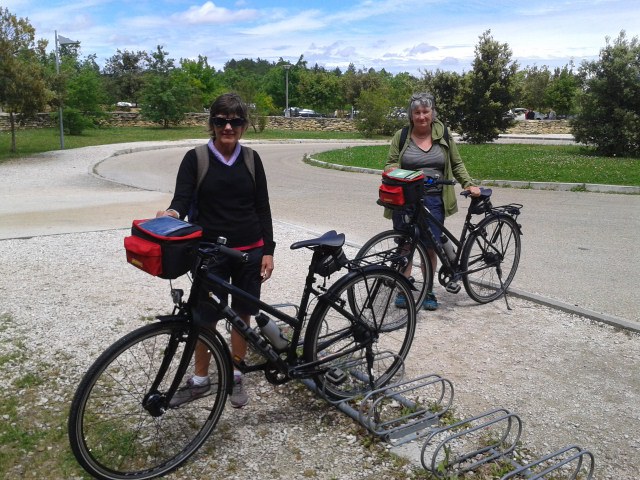 Sisters from Australia on a self-guided tour

Wes, after an epic Ventoux climb in December.

Shoko is in her 4th year at the Ecole des Beaux Arts and has only one year left before becoming a world-famous artist. She has been doing video, photography and installation/sculpture this year, with a focus on the urban environment. Here are a few photos that are part of a project called ‘Danchi’. She doesn’t have a website yet, but sometimes posts her stuff on her blog: http://blogs.elle.co.jp/languedoc/ 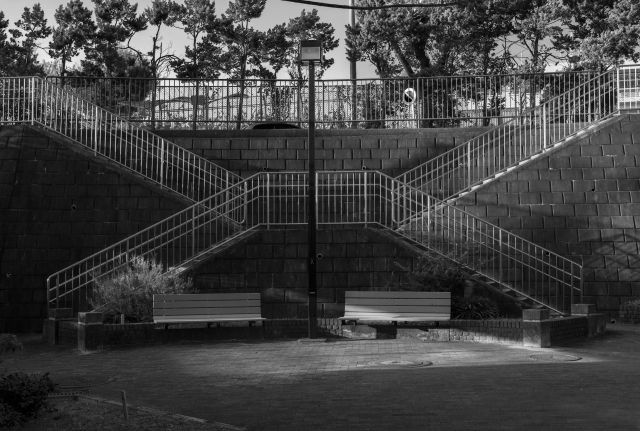 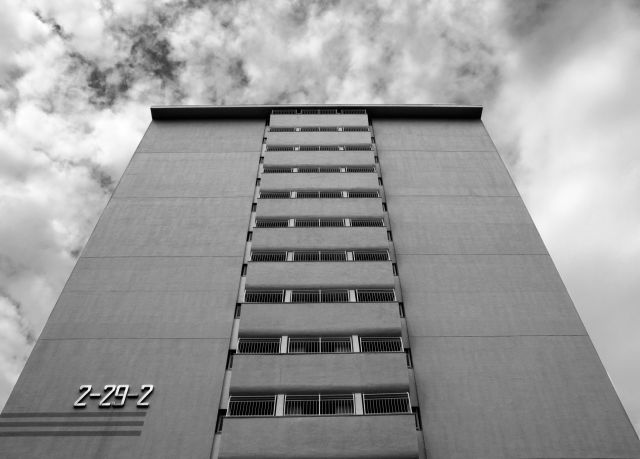 It’s hard to believe, but Shoko and I just passed our 5th year in France last summer. This milestone comes with a little plastic-encased card called a Permanent Residence Permit, which means we can both work in France and we don’t need to worry about renewing our permits each year, like we’ve been doing till now. It makes us feel less ‘temporary’, and gives us more confidence in planning our future in France. There are many more ‘unknowns’ than ‘knowns’ in the upcoming year, but those are the things that keep life interesting (along with adding a few new grey hairs…) and we look forward to seeing what 2014 has in store for us.

Here’s hoping your year ahead has open roads and sunny vistas. Bonne Route! 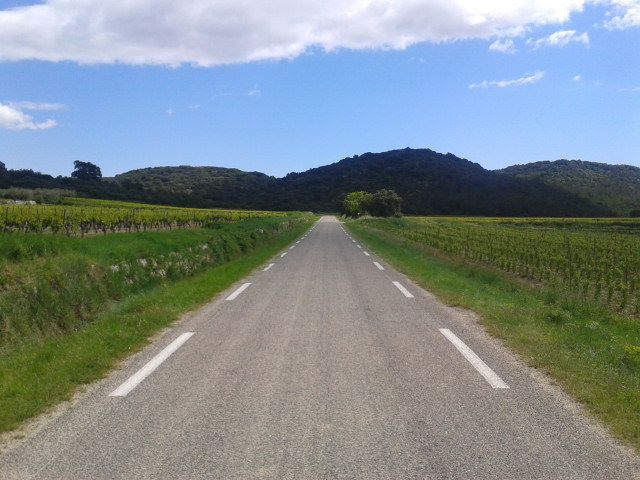