Just one more post before I haul my near-healthy bones out on the road for my first ride in  a week. 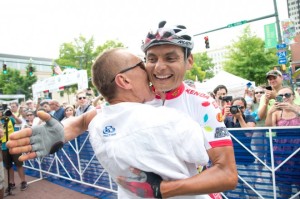 Fast Freddy Rodriguez, a name most of you think is pretty cool, but had never heard of before today, just won the US Professional National Championships and will wear that crazy Captain America jersey in all his races for the next year.

It is his 4th such championship, by the way, which makes it even weirder that you didn’t know his name.

Anyway, other than the questions over whether a 39 year old rider, who rode in Europe right through the most EPO-laden period in cycling (so far), should be allowed to win a race like this without raising a few eyebrows; this little tidbit from the VeloNews article I read yesterday stuck out:

“That’s when I really focused,” said Rodriguez, who told me he’d also been participating in grand fondos and charity rides to maintain his fitness. “I went back to what’s always worked for me, doing four-to five-hour zone 2 rides, holding upwards of 300 watts at the end of the ride.”

Next time you have the inclination to tell a non-cyclist friend that the sportive/gran fondo you are riding in this weekend ‘isn’t really a race’, think of Fast Freddy, and hold on to whatever wheel that is front of you for dear life!