Forecast: high of 12 (didn’t even come close) with rain.

A perfect day for a bike race you say? You are insane (or Irish) if you do, but I suppose we are even worse, since we did it. Le Petit Bruno is a local sportive that John and Erik did, in similar conditions, last year. Here is the happy bunch (things would quickly take a dark turn) at the back of the start gate, as usual. 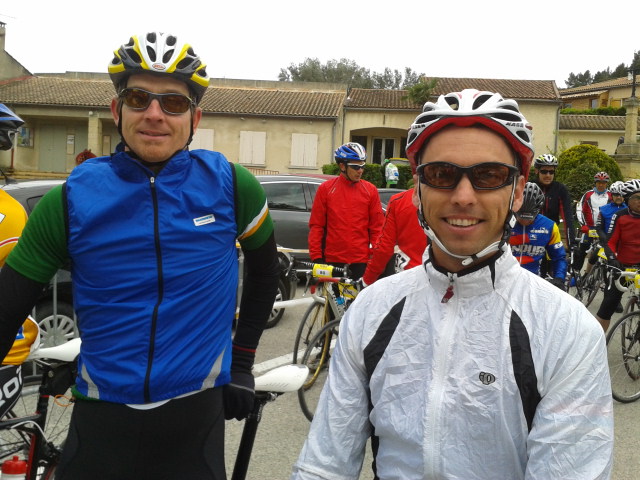 And all the riders we needed catch up to.

Since we began so far back, and since there was no neutral roll-out at all through the village (Sauveterre), it was the red zone right from the git-go again. John, Erik and I did a decent job of getting past a number of riders and then saw…a gap. My legs were already screaming bloody murder and I was thinking that this might be the end, nearly before the start, but Erik came up behind me and said ‘we have to close that gap’ (I knew that, for the record) and proceeded to take a long pull on the front till we got there (or close, I don’t remember). In any event, we made it and I think we stuck with this one for a little while, till the road ramped up a tad.

Then we sort of went from peloton to peloton, mainly on the few hills that we encountered. At some point along the way we lost Erik and John and I stuck together, frustrated with our group of slackers. Our last great bridge was an epic one that seemed to take forever, but was probably 5 minutes. John and I did all the pulling and dwindled our fair-sized group down to me, him, and two passengers who either didn’t have the energy, or were too smart to work at the front. With one last surge John caught the big peloton in front of us and I hobbled in a minute later on the descent.

The Chain (or lack of, I guess)

John was looking like his old self and obviously having a good day. Then his chain came off, he used some colorful language, and he was never seen again. It is generally the nature of these big groups that, once you are chucked out the back there’s no getting back in, depending on all sorts of factors of course.

Here is a great shot of John trying to chase us down. He said we were within shouting distance.

With John gone, I hid in the middle and waited, hoping he’d catch up, then started looking around and noticing that this particular group (it was big, at 40 or so) was probably the closest I’ve ever been to a real peloton, i.e. one that is not just madly racing to try and catch the next group on the road, or to stay ahead of the ones behind. It had rhythm. It ‘breathed’ in a way. The group, depending on who was up front, was furiously fast or frustratingly slow. But there was no way to go, even if I had the legs. If you leave the peloton, you are ‘attacking’, and we all know what usually happens to attackers 10 km from the end of the race.

There were surges at the front. There were arguments about who should be pulling. And there were attacks. I tried to keep myself up near the front because Eurosport tells me that’s the safest and most advantageous place to be. If there is an attack off the front you have no chance of catching it if you are at the back of a group of 40 riders, I’d guess.

I really have no experience with this, other than TV, so basically I went with every attack that happened. The first one was the most promising because a tall, powerful-looking guy came up from behind and ‘showed himself’ for the first time. I figured he knew what he was doing and had the legs to execute his grand plan. I went with him, along with another guy, dropping everyone pretty good on the climb he chose, but I quickly discovered he was, well, a little ‘ambitious’ in the image he had of his strength. He didn’t have the stamina and I found myself pulling those two up the last part of the hill. Now, if I had been Fabian Cancellara I would have just put my elbows on the handlebars and powered the last 35 km to a victorious finish (we weren’t even the first group, so it wouldn’t have been a win…), but, if you need to be told, I’m not Fabian Cancellara, so I pulled up and we waited for the peloton to gobble us up. Next, a couple of photos of me during the race, proving that I didn’t hide in the back! 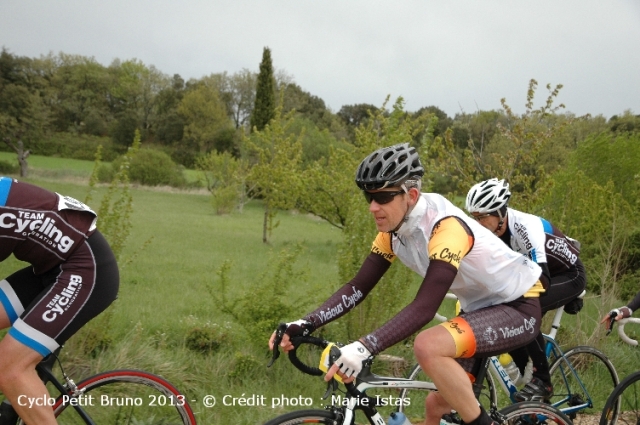 And so it went. The rest of the race was pretty much just making sure nobody wiped me out in the peloton and we all entered Sauveterre together. Again, though, I was right up at the front, which paid dividends because there was a hard right turn then a very steep, but short, hill to the finish line, and, even though we basically all finished around the same time, mine looks better!

Then the cold set it and I started to get those shivers that engulf your whole body and can only be quieted with a warm bath or a mickey of whiskey (neither could be found, but I did get a hot dog). This slightly blurry photo was taken later by John, who was also shaking. 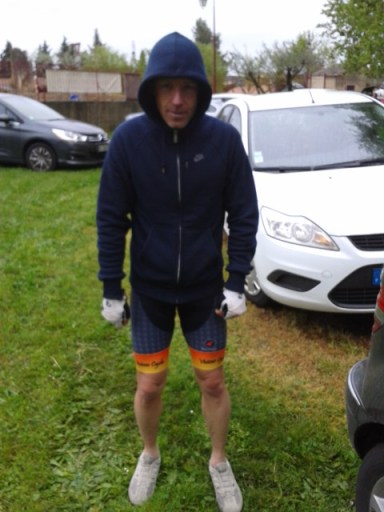 So, about those smiling faces at the start of the race. There weren’t many in our group at the end. There was, however, bike tossing, oaths to never ride this race again (this I think might be a sensible idea), and even some cussin’!

I finished in a respectable (considering our back-end starting position, especially) 98th out of 265. The race was 115 km and my average speed was 32.86 kph.

15 thoughts on “A Little Bruno”