With 25 votes in so far my poll results are as follows:

Far more interesting, though, was the amazing variety of comments this article produced. Boys do love their gear ratios…

Here is a summary for you. There is some great information in there for those who have/had the same questions I had about what to do about gears. Read the comments section of that article to get the whole story.

The first big question seemed to be whether to take along two cranksets (or individual chainrings) or two cassettes. Opinions differed, with some suggesting to leave the front alone and take along an 11-25 cluster (I have 12-27 on the bike now), and others telling me to keep the

Next up were the many opinions on what is right for the Alps, or more correctly, 7 straight days in them. Again, the range was impressive. Comments started at as much as 32 for the cassette (MTB gearing that one rider says he noticed others using last year in HR), to 36/25. The majority, however, seemed to be gravitating towards a standard Compact (so 34/27, 28 or 29 as the easiest gearing).

There was also the question of the other end of spectrum, i.e. top-end speed. Rich Velo, who finished 5th overall in last year’s HR, suggested a 50 on the front might not be enough. He rode 52/36 the last two years of the event. Others (in particular Schrodingerscat) 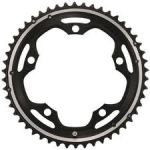 advocated gearing for the climbs, not the descents, stating that we will be spending the vast majority of our time going up, not down.

What wasn’t explicitly said, but implied in all opinions I hope, was the most important point of all when talking about what sort of gears you need – who you are. The same climb that is done in 3 hours in the granniest of grannies by one person can be smashed in an hour in the 39/17 by

another. I don’t think I’m being too simplistic by stating that the stronger and lighter you are, the bigger gearing you will want to use (all other things – like suffering ability – being equal).

Conclusions? First, I am not convinced I’ll need more that the 50 on the front, but I wouldn’t argue much if I could accomplish it easily and cheaply either. For climbing I am pretty sure that my 12-27 will be 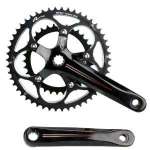 enough, even over a week of punishment, so I might try to start Haute Route with 50/34, 11-25 and keep the 12-27 in reserve in case I need it. I’ve also got a multi-day big-mountain suffer-fête planned for sometime in July, so I’ll have a much better idea of necessities after that.

Thanks everyone for your excellent comments.