Forgive me. I’ve been busy (more on that later) and haven’t gotten around to posting our Day 3 till now.

And I also realize I need to talk about Barcelonnette, since I promised to a couple of posts ago. Barcelonnette has a couple of Spanish-ish connections, which are totally unrelated, I think. First, it was probably named after Barcelona when it was founded in the 13th century. Then, in the 19th century, townspeople of Barcelonnette started emigrating to Mexico for some reason. Whatever the reason was, it certainly turned out to be a good idea, because a whole lot of them came back home and built a whole lot of nice, big houses, called Maisons Mexicaines (one of which our tour groups will probably stay at). As far as I can tell there are no actual Mexicans here, but it bills itself as a Latino town and you can get some form of Mexican grub at pretty much every joint in town, including the surprisingly great Adelita (run by a French couple who seem to know a thing about Mexican food…and margaritas!). So there you go, as far as I know, this is the only Mexican town in France.

For our last climb of the weekend we chose the Col de Vars, which we will use in our tour next year, coming from the north. On the way to the foot of the climb we passed this impractical building (unless it is a fort, then it is probably quite reasonable). Check out the series of holes in the rock all the way up. What’s that?

As we turned into the valley that would lead us up to the climb, John spotted a sign that appeared to be aimed at us. I think it was there for motorcyclists, but in any event, it is good advice.

Then the climb began and it didn’t take long to turn ugly. This is part of a Ventoux-esque stretch that never came down below 10% for what seemed an eternity.

John, in his customary position avant moi. This was our first sighting of an awesome wall of rock over there by the Italian border. 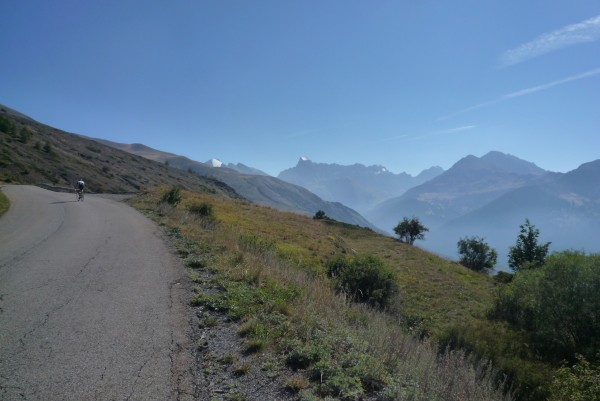 The sign at the side of the road assured me that the last kilometer of the climb would be an average of 7.5%, so I picked up the effort a bit to make a strong finish for our last col. As it turns out, I discovered, this last km never came below 8% and hung more or less around 10% the whole way. After almost blowing out a lung and donating my breakfast to the heather, I did get to the top. 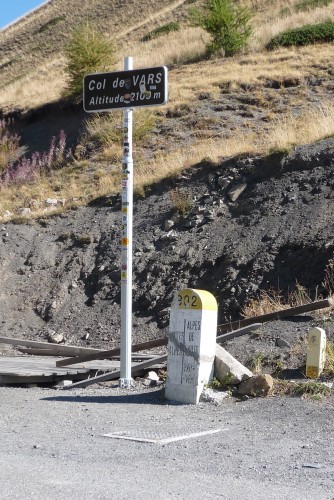 However, we were there on business, and our tour would be coming from the other direction, so we thought it prudent to descend down the northern side a ways, then re-climb.

And that’s what we did. Below is a Refuge Napoléon, similar to one I saw on the Col d’Izoard on my last trip to the Alps. Sorry for the extra divergence, but anything related to Napoléon is too cool to pass up.

You all know the story of our little Emperor, packed away on the island of Elba, but not really content with being in exile. He escaped, along with a good number of soldiers, and trekked his way all the way to Paris, getting himself re-instated as Emperor, then, inevitably, meeting his Waterloo.

Well, on his way up he was apparently welcomed quite warmly in this department (Hautes Alpes) and had plans on repaying their generosity some day. That day never came in his lifetime, but lucky for this blogger, another Emperor came around a few decades later (Napoléon III), who wanted to honor his uncle’s wishes. Therefore, 6 of these refuges were built on different mountains in the department, one of them being just below. I’m not sure about the rest, but this one still operates as a refuge, in that it offers food and a simple bed for the night.

From the refuge, it’s just a couple of easy (and spectacular) kilometers back to the Col de Vars.

I liked this view so much we are using it on our new tour page, which is complete enough for me to expose it here, I think (the reason I’ve been busy). This is, more or less, our Alps tour for 2013.

On the way down the other side the sun had risen enough to give some contrast to that ‘wall’ of mountain I was talking about earlier. 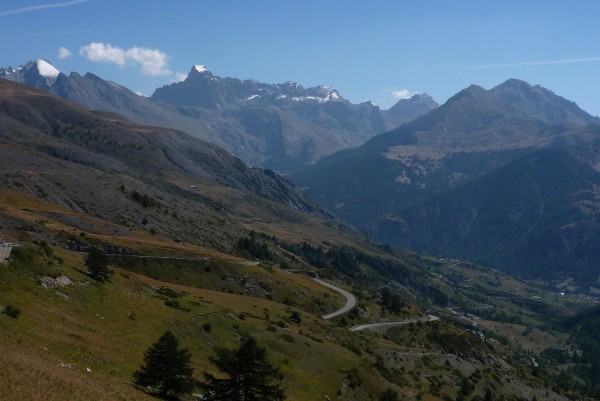 And one last peek of one of the peaks, with a pretty church for some foreground.