The sign below illustrates our Saturday conundrum nicely, I think. We really had two choices for our day: 1) Climb one of the cols you see in the signs, descend the same side, then do the same for the other (we needed to find out what these two were all about), or 2) Climb up one, go down the other side, then climb up the backside of the other.

Sounds like a no-brainer, you say. And you’d be right because you don’t know what separates the Col d’Allos and the Col de la Cayolle on the other side – another col called Champs, which would add another 1000 meters of climbing to our already dur day. Being regular readers of my mis-adventures, I think you can guess what we did, but I won’t ruin the surprise for you yet. 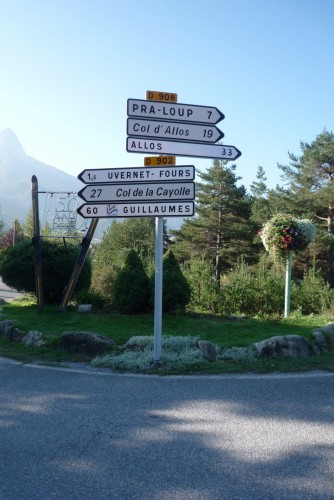 We chose the Col de la Cayolle first, for no real reason, other than it looked like we could get a better warm-up. Here is John at the beginning of the climb, exiting The Tunnel That Serves No Purpose. 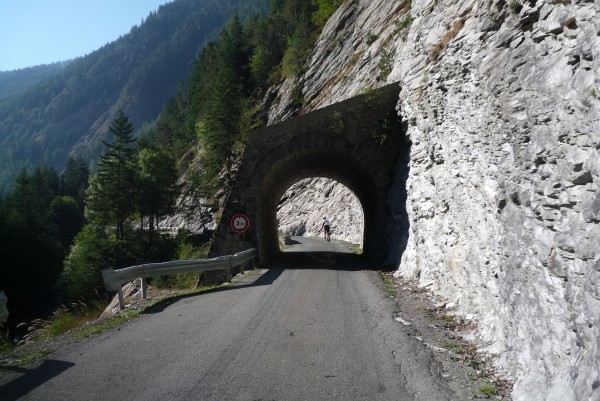 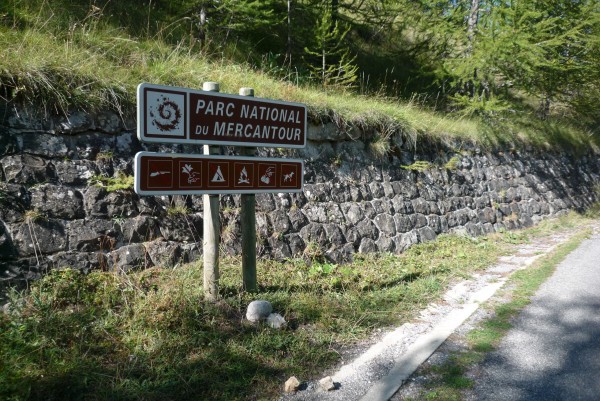 …where we were assured we could see some chamois, if we were lucky. In the end all we got were cows (No complaints here. It just gave me some ideas for dinner). 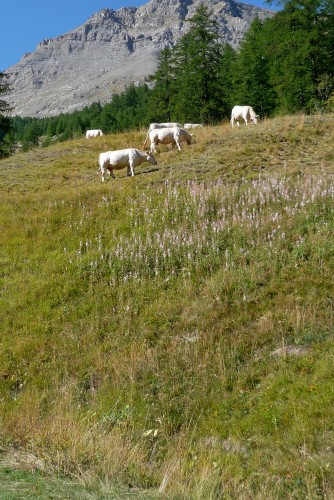 The climb of Cayolle was very, very pretty, and we both agreed that it was one of the best of 2012. The atmosphere contrasted nicely to yesterday’s grandiosity, instead giving off a homely, Heidi-style vibe (maybe it was the cows?). 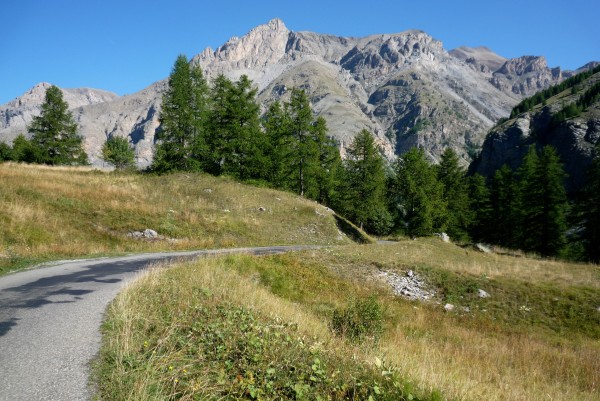 But near the top we entered into the void, where we would be spending a good amount of time this weekend (above 2000 meters). There’s the pass on the left – you can see the road tracing up to it from the right. 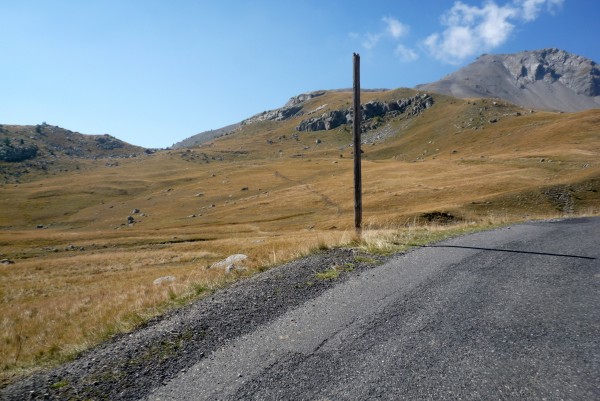 Cayolle, like plenty of other mountain passes in the Alps (Galibier for example), is the natural border between departements; in this case Alpes de Haute Provence and Alpes Maritimes. The bikes below are not ours. Someone too tired to think left them in front of our photo opp. 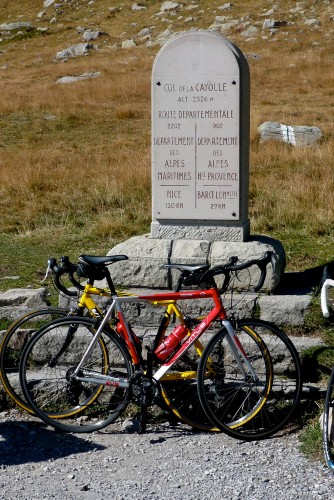 Again, there was universal (i.e. the two of us) agreement on the great descent down the south side of Cayolle (astute readers will have noticed that we did, indeed, choose the loop route for our day’s ride) and we both knew instantly that this mountain would be included in our tours next year. Once you start the descent you are presented with outstanding views of some pretty impressive mountains. The south side is also very different in geology and ‘feel’ and the descending is fun and fast. A keeper!

Here’s John at the beginning of our 2nd climb of the day, the Col des Champs. 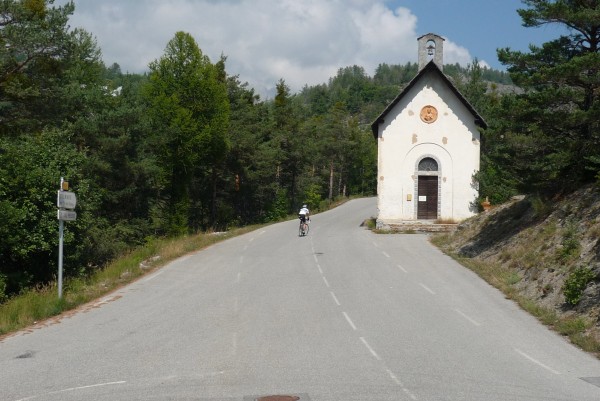 This one was far less frequented by cyclists or cars, which made it, for a while, a very enjoyable climb. 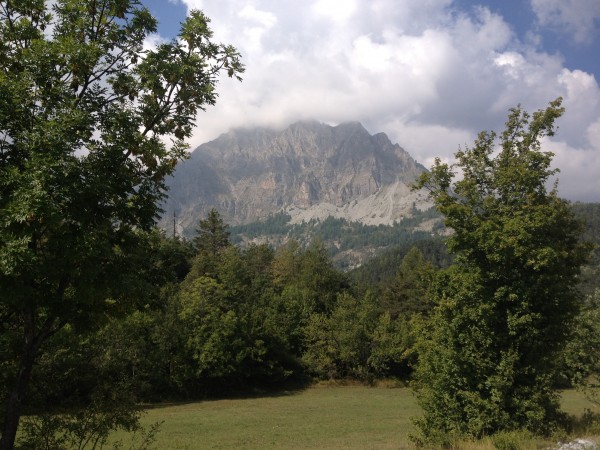 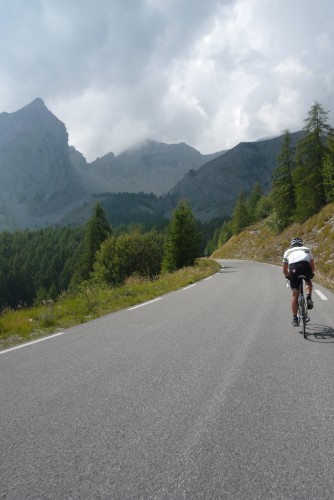 Then it got stupid.

This is the last few kilometers of the climb, which really doesn’t look too bad here, but I assure you of the opposite. Those few km in front of you were a constant 10+% and at least I found them kinda tough. 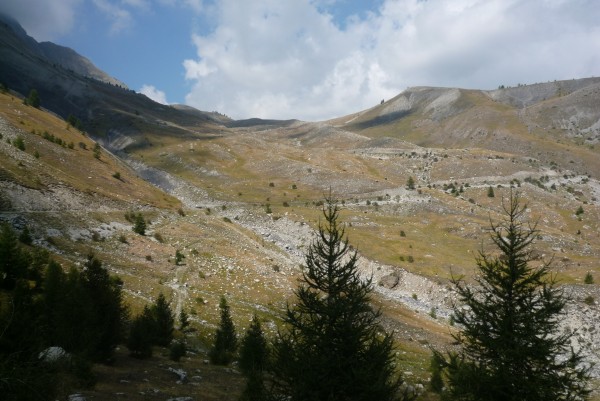 But the last 2 or 3 are very pleasant and, just like the name of the pass suggests, are surrounded by fields. 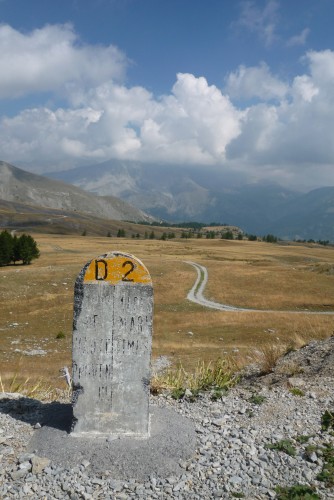 The descent, on the other hand, was one of the worst I have ever done – on pockmarked, steep roads, strewn with gravel. Well, half of it was like that. This bit was better paved, but had a series extreme hairpins, the kind really only found in Europe, it seems. They look cool, but aren’t fun, for me at any rate. 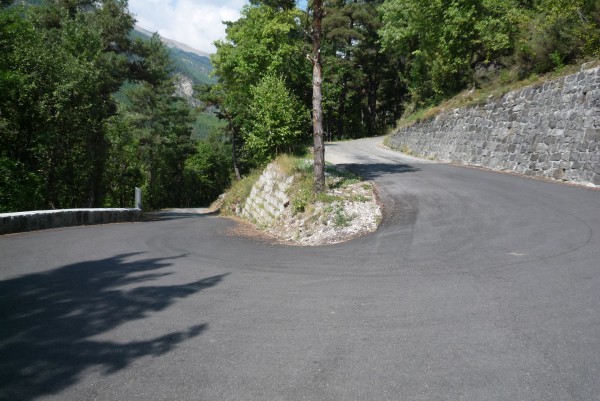 We dropped right down into the ancient, walled town of Colmars (named after the Roman god Mars, that’s how old), where I took one photo and we shared a pizza in a shady (that is, with trees…not dodgy) restaurant. 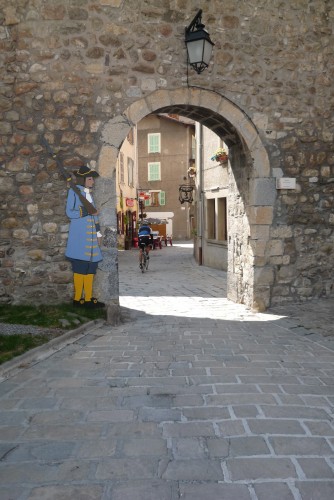 And we were just in time, too. This would be the first time a little cajoling would be necessary to get a meal in our bellies this day (John is a master of cajoling, I found out this weekend, much to my taste buds’ delight). As we left Colmars we saw this vélo-friendly yellow sign, which says that the Col d’Allos is closed to vehicle traffic every Friday morning in July and August – reserved for cyclists. Isn’t that nice? 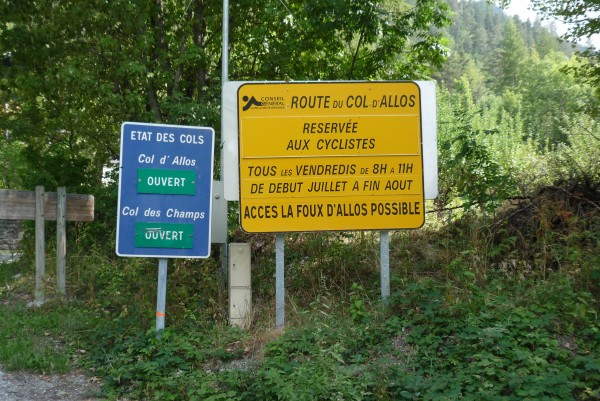 The climb of Allos, for the majority of it, was not really enjoyable, particularly when compared to the ‘awesome’ we were getting accustomed to. Much of it is on a large road that I’m sure is busy in the summer, but it gets interesting near the top. 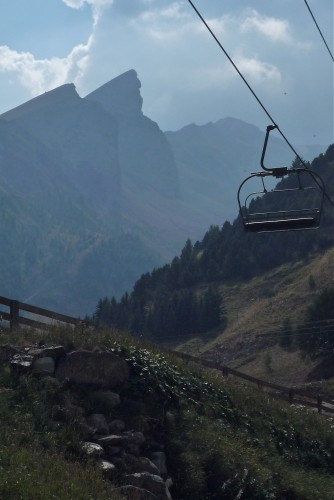 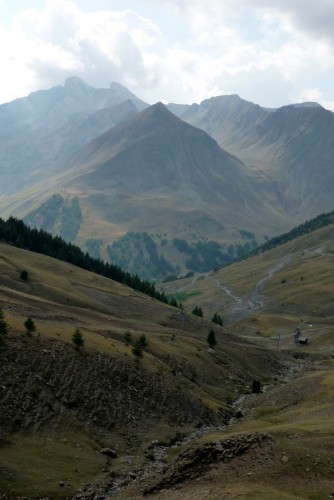 This one was never really hard, mercifully, and the last 4km were a delight, at around 7%, out in the open and with stunning views to the south. And all too soon (I say nonchalantly, sitting on my sofa) it was done. 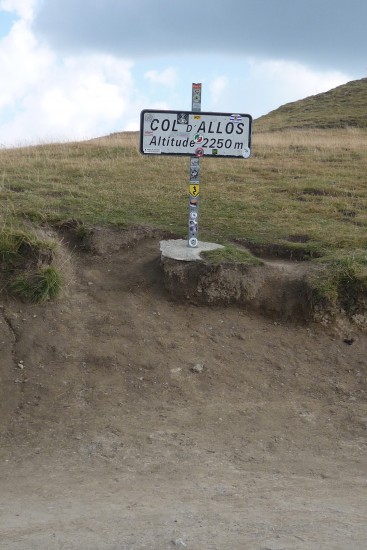 At the end of our travails we clocked up 120km and just over 3km of vertical gain. In short, a perfect day for the type of meal we had planned (but not booked) for the evening – burritos (of course, beef!), quesadillas and margaritas (more on Barcelonnette’s strange Mexican history later).