It’s Just a Hill, Get Over it!

On Monday and Tuesday this week I organized my very first real bike tour, and I’m happy to report that not only is everyone still alive, they even seemed to enjoy themselves (although this fact hasn’t been confirmed…). Anyway, I had a great time at least.

Monday was a simple pick-up from Pont du Gard because the group wanted to stretch their legs by cycling from their hotel in Montpellier over to the acqueduct, a 90-km warm-up for their assault on Mont Ventoux the next day. Here are the wheels I had for the two days; I’m fairly sure the only Benz I’ll ever have the pleasure of driving.

This ride was all well and good, but my group was here on serious business. Tony, the organizer of the trip, was turning 70 and thought he’d like to celebrate by climbing Ventoux. To accompany him he had his son Rick, daughter Julia, nephew Roger and friend Tim (plus a carload of motorized fans, in the form of his wife, sister and friends from the UK), all with various Ventoux aspirations. Some were talking about a potential triple ascent, others seemed quite content with one. But my job was to get them to the bottom and, with a lot of help from cycling buddy John, I did. 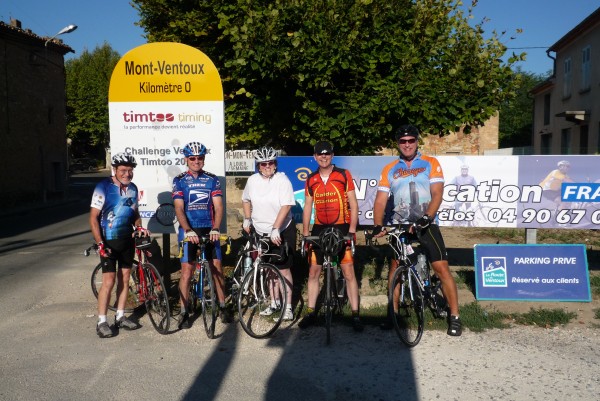 A few shots of the easy part of Ventoux – the first 5 km out of Bédoin. Look at this October weather!

Here’s our next stop, about a kilometer up the forest, where 9% is the norm. 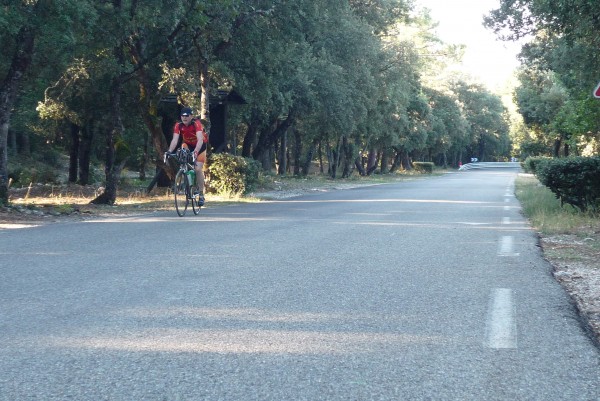 Tim in the lead 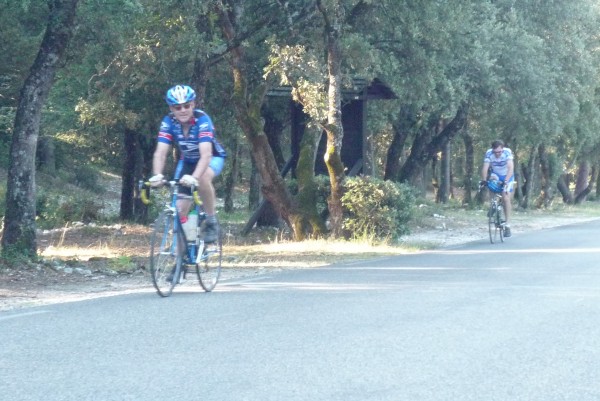 A blurry Rick (sorry about that…) 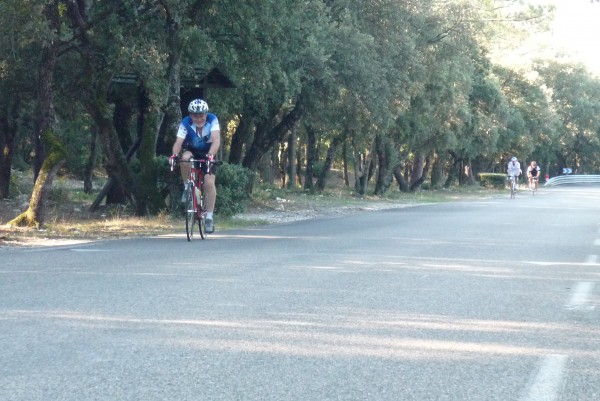 After everyone passed by, John and I headed up the road a bit more to see if anyone needed anything, then drove to Chalet Reynard and waited in the glorious sunshine for the group to arrive. This was October 4th, and although it is southern France, the weather really shouldn’t have been this perfect. The temperatures at the bottom reached the high 20s and, more importantly, even at the summit it was warm. Virtually no wind either, which is saying something for Ventoux. 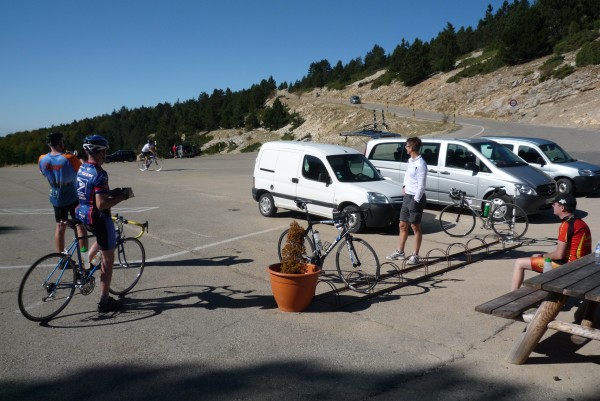 Tim, Roger and Rick were on a mission so they took off shortly for the last 6km push to the summit. John and I, after driving back down a bit to check on Tony, descended further to see how Julia was making out. We found her sitting in a picnic area, waiting patiently for us. She’d given it a good go, but decided to pack it in. So, we swept her up and drove back up to Chalet Reynard, only to find Tony sitting down to an omelette and fries at the restaurant. We stopped, contemplating doing the same, but decided to chase the three we’d let go a while back and see if we could see them at the top.

Not to be. They had summited, descended down to Malaucène for lunch and then a 2nd ascent from the north side. With nothing to do but wait, that’s what we did. We spent a really nice afternoon on the top of Ventoux, checking out the Alps to the north and trying to figure out where stuff was in the distance, chatting with Tony’s other support team (wife Audrey, et al), and playing ‘spot Tony’ from the summit. Then, he came into view…sort of.

The above photo is the last, very steep, straight stretch before the famous sharp right-hander at the summit. We had people strategically placed at various points, anxiously awaiting Tony’s triumph, when suddenly, without warning, he turned left to go to the bar that sits under the top of the mountain! Everybody started yelling at him and, reluctantly (and probably thirsty as hell), he pushed on to conquer le Geant.

The fans crowd in 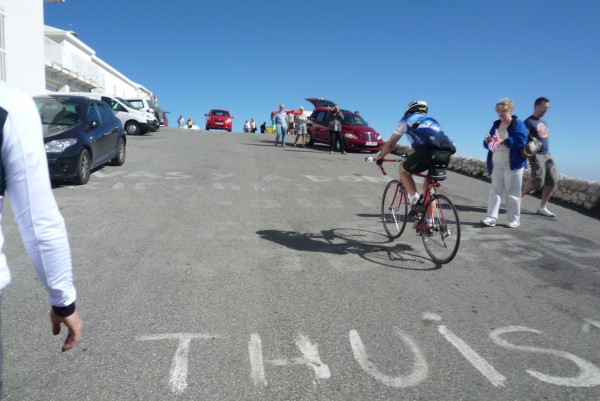 After the jubilation wore off we waited some more, then The Call came. Rick and Roger had valiantly tried to get themselves up the north side of the mountain, but it wasn’t to be, so we all drove down to pick them up, passing a fresh-looking Tim on the way. He went on to do two full ascents and met us back at the start in Bédoin, where everyone had a celebratory beer in the village before the long drive back to Montpellier.

Thanks to Tony, Rick, Julia, Roger and Tim for being the easiest-going tour group a guy could hope for on his first one. If you know anyone else like you, send them my way!