As some of you may know, my coach/step-brother, Rob visited France this summer to see what all the fuss was about with our ‘epic climbs’. Well, epic mountain climbs deserve epic blog posts, so sit back and enjoy the ride for the next few days! Rob has offered to write accounts of his terribly tough days in the Alps, plus his crushing ascent of Ventoux. I could really get used to this ‘guest blogger’ thing…

Long before the movie “The Bucket List” starring Jack Nicolson and Morgan Freeman, I wrote myself a list of things I wanted to do in my lifetime.  My original list was focused on the material desires of a 16 year old.  As time passed the list has changed from material desires to items that are experiential or philanthropic.  For example, in the past two years, I’ve raised over $20,000 for Cancer Survivors by riding my bike from Calgary Alberta Canada to San Jose California and from Calgary to Austin Texas in separate years.   I also rode my bike from Toronto, Canada to Miami, Florida USA in an effort to raise money for Leukemia research, the disease that took my mother’s life 30 years ago.  I’ve managed to blend my passion for cycling, with health, wellness, and philanthropy.  This past summer, I was able to cross a few more items on the Bucket List:

If climbing some of the epic mountain passes that have been made famous by the Tour de France over the years are on your Bucket List, I hope the following motivates you to take action so you too can place a check mark beside each item.

My daughter, Nicole who currently lives in London England and I in Calgary Alberta Canada met up in Nice France where we departed by vehicle to Valloire in the French Alps.  The plan was to spend two cycling days in the Alps and the rest of the trip riding through Provence before we returned to Nice for a few days.  While in the Alps I would ride Stages 18 and 19 of this year’s Tour de France and include Mt Ventoux while in Provence.  My daughter would sit out the Alps and provide me support and ride in Provence. 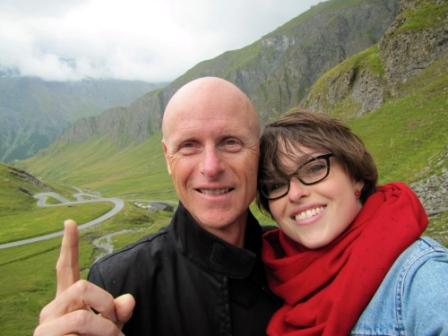 The first day in the Alps I rode a modified version of Stage 18, as I cut out the fairly flat section from Pinerolo to Pontechianale and focused on the three hors catégorie climbs of the Col du Agnel, Col d’Izoard and finishing on the summit of the Col du Galibier, a total of 3360m (11,023ft) of vertical climbing.  We drove a 130km from Valloire to my starting point of Pontechianale and after a good luck hug from Nicole, I was on my way.

The first 500 meters of my 110km trek through the mountains were relatively flat (only a 4% incline) and it would be the extent of my warm-up and the easiest riding for the rest of the day.  After this 500 meter “warn-up” I rode past a sign warning me of a 14% incline.  Now a couple hundred meters at 14% is tough enough, but 2km made me think this was going to be a very long day in the saddle. 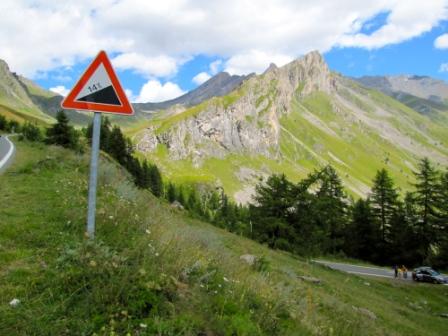 Like any riding in high mountains, the weather can be very unpredictable.  One day can be pouring rain and cold, and the next, bright sunshine, which was the case for us.  Fortunately I had the sunshine, but unfortunately the high pressure system that brought the sunshine also brought 40+km/hr headwinds for the entire day, making me work extra hard for my Bucket List check marks.  The good thing about switchbacks, and the Col du Agnel has an endless ribbon of them, is you can benefit from a strong wind when you change direction and it becomes a tail wind.

The down side are the cross winds.  I had one gust that nearly blew me off the road and literally off the side of the mountain.  Next time I’ll leave the 50mm carbon rims at home and bring my low profile wheels.

Besides the excitement of almost being blown off the mountain, I made remarkably good time up to the summit of the Agnel given the conditions.  The top of each summit during the day was the same; extremely windy and very cold (just a few degrees above freezing), so make sure you bring a wind vest or jacket for the long white knuckle descents down the mountain.

The wind made it even more difficult descending the hill and the last thing I wanted was to lose control at 70km/hr.  I was so focus on staying upright, I never really appreciated how beautiful the ride down the mountain was, so I was glad Nicole was taking pictures of the beautiful landscapes and cute little towns. 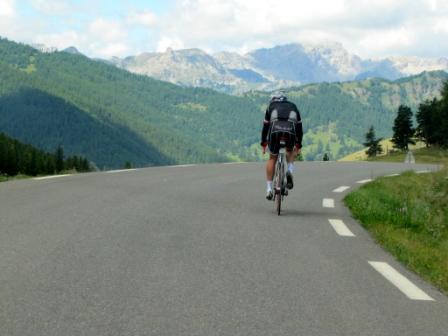 I ride a Rossetti bike with Campy Super Record 11 (very Italian) and was wearing their kit, which has the Italian colors on the bottom of the legs and arms, so naturally being so close to the Italian border, when I passed someone they thought I was Italian and always said “Caio”.  I loved their reactions when I said “hi” or “Bonjour” (in my horrible English accent).  I’d ride a little while with them and ask where they were from (they usually said Holland) and if they were training for anything specific (many for the Ironman) and after a little more discussion about how strong the headwind was, I wished them well and resumed my pace.

The Col d’Izoard didn’t seem as tough as the Agnel, but how many times do you ride a 2km section at 14%.  That said, any pass that’s granted the hors catégorie designation by the Tour de France is a hard climb and shouldn’t be underestimated. 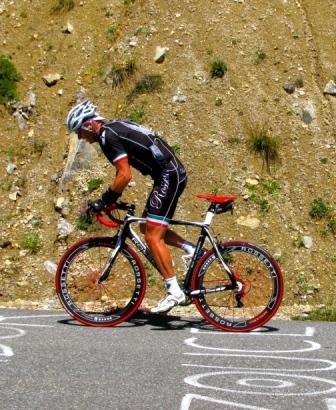 Although the incline was steep, riding the lower section of the d’Izoard in the trees was actually pleasant as I was sheltered from the relentless headwind.  Once on the climb, I was motivated to ride hard, as there was always someone up the road to catch. 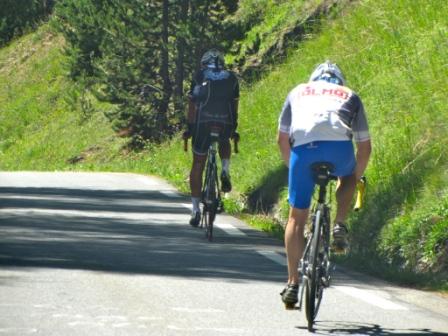 After a brief exchange of words with each rider it was back to tempo riding and before I knew it, I was at the summit of the second mountain where Nicole and I took a brief but cold, windy stop for the mandatory photo op.

After putting on my wind jacket, I was descending the hill like I robbed a bank.  Where I live, we don’t get the opportunity to practice descending on steep technical hills with switchbacks.  As I was doing my best impression of Cadel Evans navigating through some serious switchbacks at what I thought was a high speed; some guy passed me like my brakes were rubbing on my rear wheel.   (Note to self: work on descending skills).   Once I got to the bottom of the d’Izoard (only one guy passed me on the descent, so my pride was still intact), the wind returned with a vengeance.

The climb to the top of the Galibier was next up and it actually starts 41km from the summit as you leave the town of Briancon and climbs up to the Col du Lautaret first.  Once you reach the Lautaret, you’re rewarded with the monster climb up the Galibier.   I found the 9%-10% climb out of Briancon combined with the head winds that were so strong the trees looked like they about to be uprooted extremely tough.  There were times I was riding so slow I could read the writing on my wheels.  I passed this one rider along this stretch and all he did was shake his head in disbelief.  No words were exchanged, but I knew exactly what he was saying.  I also saw lots of cyclist flying by in the other direction.  Not only were they descending off the Lautaret, they also had a ferocious tail wind pushing them along at easily 70km/hr.  As they passed by, I could almost read their minds…..”Poor bastard, you’re going the wrong way”.

Like the Agnel, the switchbacks were my friend, as I enjoyed sections were the strong head wind became a strong tail wind.  The Galibier is everything I thought it would be, long, steep, very exposed and relentless.

As I approached the final few kilometers, I was particularly motivated for many reasons, 1) I was checking a couple long time items off my Bucket List, 2) my daughter was sharing the experience, and 3) I was riding the same route, Andy Schleck, Cadel Evens and the rest of the Tour riders rode only weeks before me. 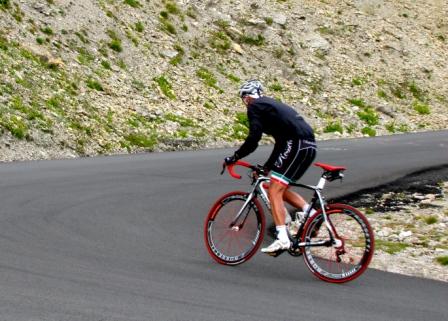 Once at the top Nicole and I stopped again for the mandatory photo op and after we spent time looking at the magnificent scenery, we got in the van and headed down the mountain to our chalet in Valloire where we cleaned up, headed out for a well deserved dinner and retuned early for good night’s rest, as tomorrow I would be riding the full Stage 19. 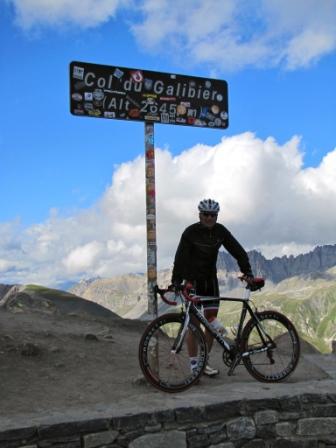