It has been 3 weeks since the Etape and, although I’ve been out on the bike a little, mostly I’ve been enjoying my post-goal life of rest, beer and a total lack of fartlekking. Climbing Mt. Ventoux for a 4th time this year honestly never crossed my mind.

So imagine my surprise when my mind took it upon itself to tell my fingers to email Tim Marsh and let him know that I’d join him on one of his ascents of le Geant!

In my defense, it really was probably the only way I could meet up with Tim, a mad Aussie cyclist and frequent commenter on my blog. Tim, and his girlfriend (correct me if I’m wrong there) Kate, have been in Europe for a month, doing Etapes, following the Tour and trying to find the good weather we are so well known for (it’s been a little wet), and they are down to their last few days. I had to do it.

So I hopped on the train to Orange and rode my way through the pretty Dentilles mountains to Malaucène, where the northern route up Ventoux begins. 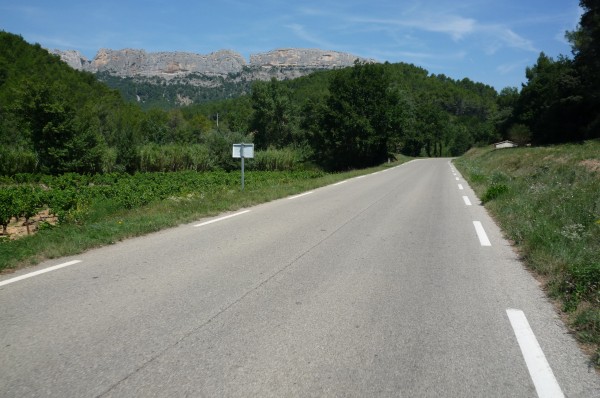 Here is the sign outside town that warns you of the trouble you are about to encounter. 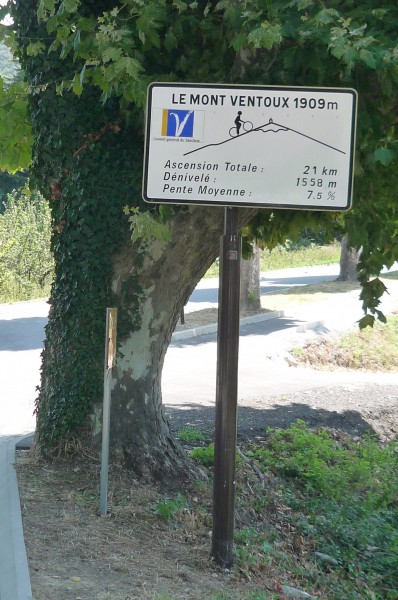 I met Tim near here – get this – for his 3rd climb of Ventoux that day. Yes, there are three routes that converge at the tower on top of Ventoux, and some maniacs attempt all of them in one day. Here’s one of them.

If you can manage to haul your mutilated legs up Ventoux 3 times you will have done 70 km of ascent, with an elevation gain of 4300 meters.

Tim and I stayed together on the climb for a little bit, but I was fresh and feeling feisty, so I went ahead to see what I could do to remedy the failure I had on this climb back in May.

This is a section at 12%, the steepest on the climb. I still can’t decide which side of Ventoux is harder, since they have completely different characters. I’ll keep trying till I figure it out.

This next shot is where I bonked on that day in May. I remembered it well, since I spent so much time on the shoulder, suffering and sucking power gels. I didn’t stop this time, even to take this photo. I do have some pride.

Here’s a sight I nearly cried at when I saw it in May. This is only 2 km from the top, but to me it looked like it was 2km straight up. I was feeling good this time, so I just concentrated on my rhythm and the road ahead and it was over in no time.

While I waited for Tim at the top I took the chance to look around a little. This image, I thought, says it all about Ventoux.

And check out the panniers he’s carrying! You see all sorts of bikes coming up the mountain, actually. Here’s a guy on a recumbent – a feat I had thought completely impossible.

Then Tim rounded the corner at the summit.

After an insane descent (I’ve met my match in that department) to Bédoin, we rode over to the campground where Tim and Kate had their campervan parked, had a couple beers and a nice chat in the Provencal sun. I’m not sure that it gets much better than that.

If any other readers out there would like to get together for a ride, give me a shout. I need an excuse to get out of the house.

For my other Ventoux escapades this year, check out the following posts. I’ve got some tips on climbing it on the last link, for those game enough to try.