Warning: over the next few days I’ll be putting up these old ‘wrap-ups’ of ours that have not been posted online. Just a little project to update my past from analogue to digital!

You’ll all lose your jobs, but don’t worry, it’s good for the company!

The first part of the year was one of a bit of uncertainty. Shoko had been told by her company that, due to an acquisition, most of the office would be laid off. We started planning for the worst and were looking into moving back to Canada or moving on to France. Sometime in February I think the verdict was handed down and she would get the axe, along with most of the rest of the office. The very next day I get an email from her saying that she had been offered a job in Singapore with the new (Big American) company! By that time we’d given up on Canada so it was between a job in Singapore and absolutely nothing in France. In the end, through the kindness of my company in Japan (and the convenient fact that nobody wanted to do my job) I was able to do my work from home in Singapore. I always said I wouldn’t wear a tie after 40. I beat that by two years and whittled my business attire down to jockey shorts and a smile.

A Reunion of Sorts

My mother was unfortunately born in the middle of winter, which makes it a little hard to get people excited about celebrating even a 75th birthday. Well, Ruth is no dummy. She postponed her celebration till April and the whole family got together for the first time in a while. It was especially nice for me, not only to be there to celebrate the milestone, but to have the chance to see, chat, and drink with, the family I left behind. A highlight for me was sitting down and having a good talk with my nephew Jason, a man I remember most as a boy. Mom is still spry and hasn’t lost the love of a crowd. The party we had for her was hailed, even by the ‘old folks’, as a grand success.

We landed in Singapore on April 29th and were chauffeured to our serviced apartment, where Shoko’s company put us up for a month. Within that month we had bought a scooter, found a condo by the ocean, and began learning Singlish (Okay la, never min’). Singapore, for those who don’t watch the History Channel, is a former British colony, and hence is dotted with lovely colonial architecture. It is also very much a Chinese city, and there are still hundreds of streets lined with old shophouses, oozing character. Boat Quay, a beautiful, curving portion of the Singapore River, has a long line of former shophouses, now converted into al fresco restaurants and pubs. The city also has a sizeable Indian population that is centered in Little India. It really is like a ‘Little India’, but happily without the water and food-borne diseases! Singapore was originally a Malay island and 14 % of the population is still Malay, and therefore Muslim. Mosques are a common sight, but mercifully I think the city has a law against calling to prayer at 5 am, like is done in most Muslim countries. All this adds up to a thoroughly interesting place with lots and lots of different kinds of festivals throughout the year. 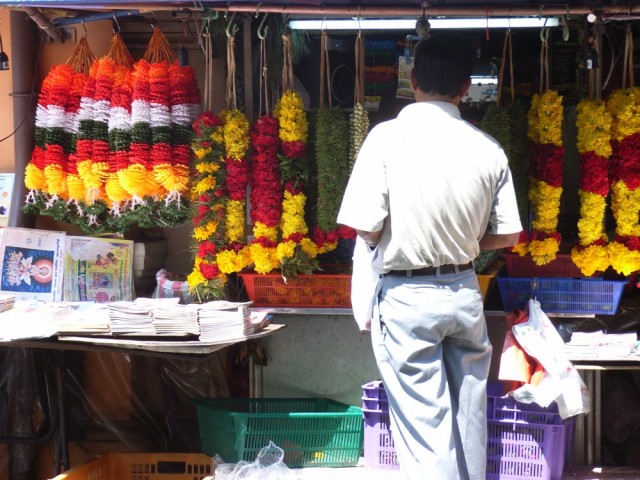 The weather here is astonishing. I keep waiting for an earthquake or a typhoon or a tsunami, but Singapore is blessed with an extremely gentle climate. It lies just above the equator so the sun rises and sets at the same time every day of the year (more or less) and the temperature goes up and down by around 3 degrees! It rains, but unless you are out on the bike, you don’t notice it. It just goes away and the sun returns. I know what you’re saying, ‘you must get bored with summer every day.’ No, surprisingly it’s not! 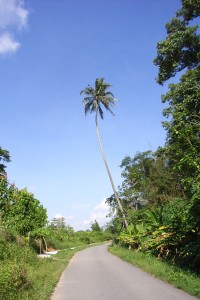 My advice is come and see for yourself. 2007 is filling up, so book early.

No really, I am Canadian!

While researching all things Singapore I ran across a ‘Canadian’ dragon boat team. Since I was going to be working at home I thought it might be a good way to…get out of the damn house! Shoko was interested too, so we went to a practice down at the Kallang River. Other than the extreme hurt I was in for the following week the most outstanding memory of that first practice was the ovation I got when I introduced myself as Canadian! Yes, the ‘Canadian’ dragon boat team is actually infected by all sorts of foreigners – at last count 21 nationalities. I suppose my joining lends some credibility to the name. It’s bad enough that our cheer is C – eh – N – eh – D – eh! But at the July races we had a whole motley crew of non-Canucks kicking up their heels to Stompin’ Tom’s “Canada day up Canada way”! Well, Canadians or not, the team are a great bunch of people and we have found our surrogate family in Singapore.

I lived in Japan from 1997 to 2006. Yes, that’s 9 years. Guess how many visitors I got from overseas? Mom, Susie and cousin Jeanne…all in the same trip. I was starting to think it had something to do with me, until we made the move down here. Since we’ve been in Singapore we have had 5 visitors to our place (although only 2 with photographic evidence..)! Location really is everything. 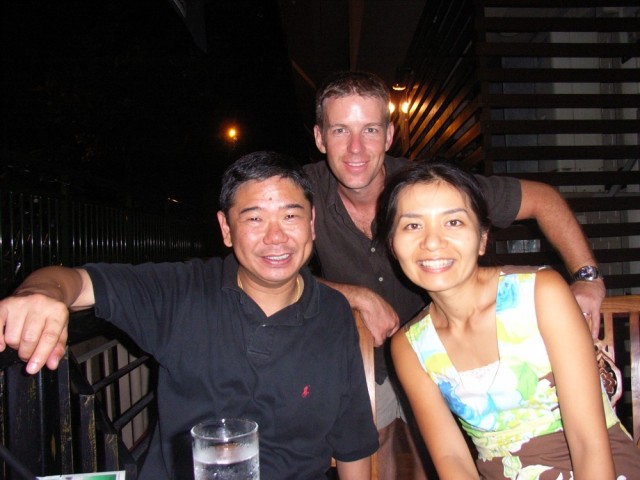