Stretching the Legs, Freezing the Feet

The sun was out and the wind was not that nasty, so I went out for a long ride north of the city today. Here are a couple of pictures of Pont St. Nicolas, a bridge I ride over every week, but never see. Thanks to winter and bald trees I can finally show you what it looks like. 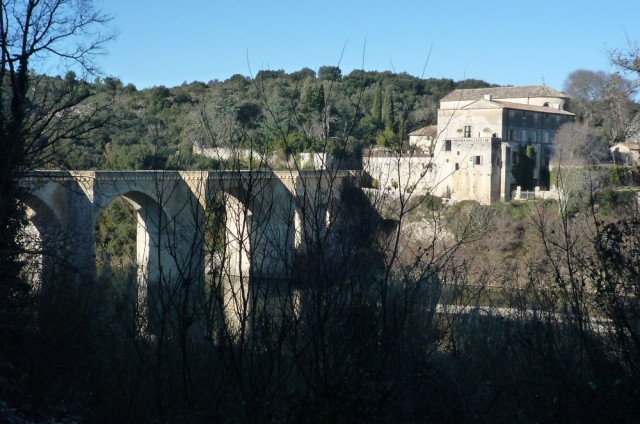 Turning off the route to Uzès a little ways past the bridge I found a small, meandering road that took me up a ridge to Blauzac, where I took this picture and found out how easy it is to ugly up a new bike. While my new Bianchi was leaning up against a stone wall, it shifted on the stone pathway and (I thought) gently hit the edge of the wall, scraping, scratching, chipping and gauging my beautiful paint job in about 5 different places. I’m sure there’s a lesson to be learned from this experience, but I’m equally sure I won’t learn it!

Further north into the ‘Uzège‘ (the name given to the hilly region around the wonderful, historic town of Uzès), I ran into this taunting image.

That is Mt. Ventoux, the ‘Giant of Provence’, and probably the most famous of all Tour de France climbs. One that I now have no good excuse not to try next year either, since I actually have a bike that should, in theory, pull me up its slopes…well, my theory at least.

Finally, as I was riding into St. Quentin la Poterie, I passed by this odd construction in the middle of a field.

It’s a ‘capitelle’, or ‘shack of dried stone’, if my French is working. This particular one dates from the early 19th century, but the hills around the village are apparently littered with them, in various states of disrepair. They were, I’m assuming, little cabins for farmers. Languedoc is full of such things, albeit more square and less igloo-like than the shacks of St. Quentin la Poterie. If anyone cares to enlighten me on these some more, feel free.

And about that sun, well it stayed out all day, which was a blessing because it was only 5 degrees and my right foot totally froze up on the way home. I guess it has to do with the metal clip on the shoe, but the entire front of my foot was numb when I arrived home. I should be thankful, I guess – I’ve had much more serious numbness in more essential areas in the past from cycling. If you’re a guy who rides, you’ll understand.

3 thoughts on “Stretching the Legs, Freezing the Feet”