I made mention of these Big Three in a recent post and thought maybe I should pump them a little more, in case any of you out there aren’t aware of these giant European sporting events (I don’t blame you…I didn’t know that handball was a sport anyone did outside of gym class before moving here…).

First up, since it is the first of the year – The Giro d’Italia. The Giro is a 3-week race (like the others) that began 101 years ago in 1909. It runs in May and is often looked upon as an excellent warm-up for the Tour de France for  the big-name riders. Here’s this year’s route, surprisingly starting in Amsterdam.

Next up is the big one. No disrespect to the other two, or any other race in the world, but there is really no competition when it comes to prestige. The Tour de France was the first (beginning in 1903) and by far the most popular and well known (it is the largest spectator sport in the world). If a rider wins only one stage of ‘le Tour’ it could make his career…or at least do wonders for his contract the next time he negotiates it!

The Tour is run for 3 weeks in July, always ending in a mass sprint up the Champs Elysee in Paris.  Here is the map for this year. Again, Holland hosts the beginning. 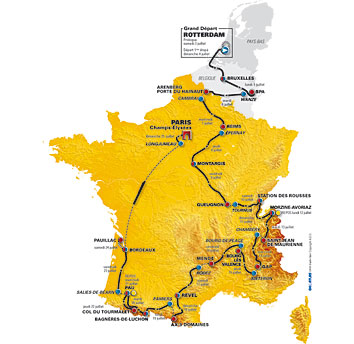 Last up is the Vuelta a Espana, held every year in September. The Spanish, like at least the French (and I assume the Italians), are nuts about cycling, and most of the great riders will win the Vuelta once or twice at least. The best rider in the world at the moment, Alberto Contador, is no exception, having won it in 2008. This is the route this year.

Now that I think about it, it would be a shame to live where I live and not make it to the other two big races (I am already a minor Tour de France stalker). We are 300 km from Italy and only about 200 km to Spain so really no excuse not to. I’ll keep you posted.