Friday I did my half day of work (don’t hate me, my salary is as slack as my hours!) and packed up the motorcycle to head to the Pyrenees where, with a little luck, we would catch at least one stage in the high mountains. The French say (and others too, I suppose…) that the Tour is won in the mountains, and in my experience that is certainly the case. I remember one of the first Tours I watched, Armstrong was over 30 minutes down on the Yellow Jersey before the Alps stages. In the first day in the mountains he had not only gained all that time back, but put himself well into the lead. I like to say that the mountains separates the men from the boys, but that is not really fair. Specialists like sprinters have giant legs that are made for mad accelerations. They just can’t use the same legs to propel themselves up mountains. In fact, many sprinters don’t even finish the Tour, falling behind the time limit alloted by the organizers, or just bonking then climbing into the team car and a ticket back home.

The mountain stages are also the place to get up close and personal with the riders. You can really get in their faces, as many idiots do. It’s also not unheard of for fans to give a push or two to their favorite riders – a no-no but generally overlooked by the authorities. It is the only sport I can think of where you can get right next to some of the best athletes in the world. Last reason to get to a mountain stage? I think the pictures tell that story.

On Friday, because we left so late, there was no way to catch the stage up to Andorra, but we stopped enroute and saw the last hour or so at a small town bar near the foothills of the Pyrenees. I thought this guy looked really ‘French’, so hid behind my bike and snapped this shot.

And the inside of the bar, TV on with…yes, the TdF. As I said in an earlier entry, if the Tour is on you know you can watch it on any public TV. 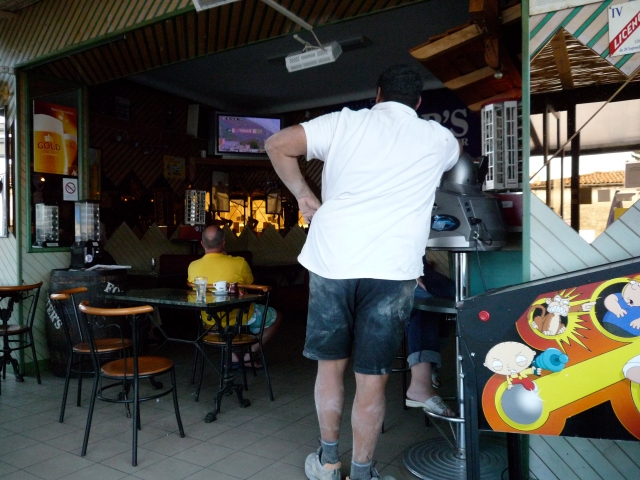 The stage was certainly eventful. Alberto Contador flew off around a corner a few kms from the top of the last climb, and nobody followed. Armstrong later claimed that he simply did what was agreed on before by the team – i.e. staying with the other leaders in the general classification. Contador ended the day in 2nd place overall, with Armstrong trailing by 2 seconds. This day really made the already-large question mark on the leadership of the Astana team even bigger, and added some fuel for the media fire that is unfolding day by day.

We camped in Pamiers, near the mountains, and made our way into them the next morning. As fate would have it, we were too late to get up the road I wanted to take to get to one of the climbs. I am learning a lot about the strategy now though. You need to get up very early to beat the Gendarmes to the punch. They closed the road at 10am even though the riders wouldn’t be coming through till 1:30pm! Safety first, I suppose.

After a little consideration (and blame taking for me…) we decided to watch the riders go past where we were stuck, then hope the cops opened up the road quickly so we could take a shortcut over the mountains to catch up with the racers on the largest of the climbs that day – the Col d’Agnes. Incredibly this plan worked. Here are a few pictures of the cyclists flying by Tarascon sur Ariege. 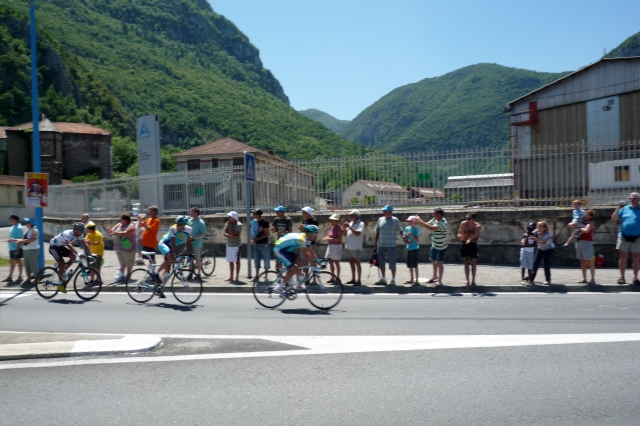 How to spot Armstrong in a crowd? Black helmet and black socks…if you were wondering. 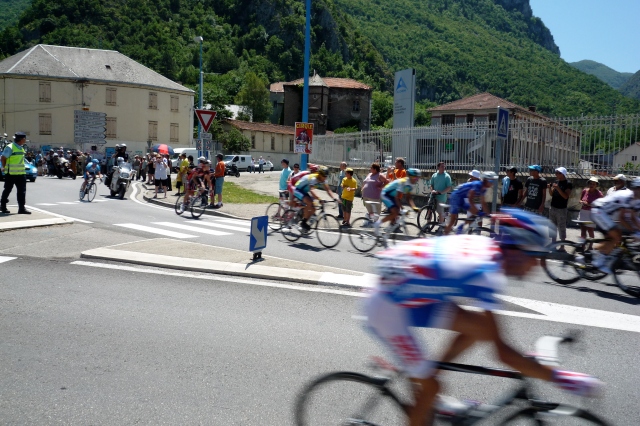 After the last rider, and about 300 support vehicles, passed us by the Gendarmes opened up the road and we sped ahead that route you can see in the left of the photo above. It was probably the most scenic thing I’ve ever done on a motorcycle – a gently swaying ride up the river then switchback heaven all the way up the the high-altitude cow pastures. This is the top.

After the serenity of that we descended into this… 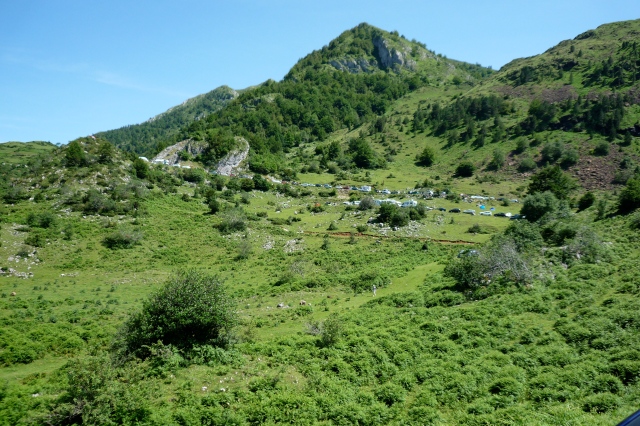 While we were waiting the guy on the right heard cow bells approaching. It seems his cows had been spooked by the helicopters and were coming down the mountain. While his family/friends made cow jokes, he ran off through the meadows, big stick in hand. While the first riders crossed our paths he was still up there, ‘talking to the cows’, as his friend on the left supposed. You can see them in the top right corner of the shot, to the left of the offending copter.

By the time Lance and the Astana crew passed us the cows were turned around and moving back up the hill. 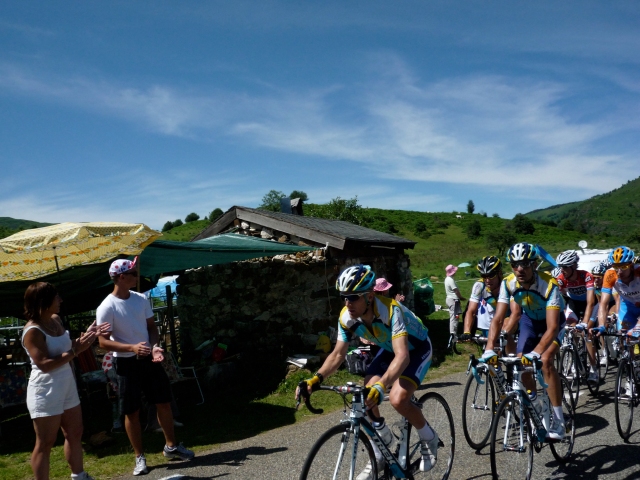 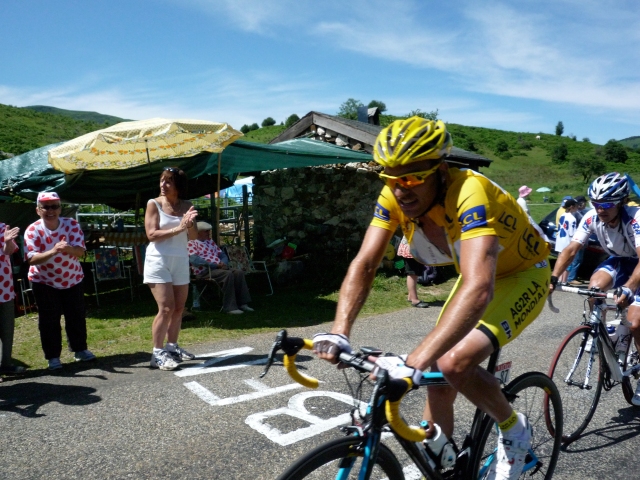 This pass was big, but there was about 45 km of riding left to do after it, and most of it was either downhill or flat, so most everyone gathered together by the end of the stage and there was no more drama this weekend.