Bill Blue: Guardian of the Sangliers

You are at the top of the stunning Gorges de la Nesque in the south of France. You’ve just ridden up the 20 kms from Villes sur Auzon and you haven’t seen one single car. Ventoux dominates one vista, the massive gorge another, and the hint of a scent of lavender tells you the Albion Plateau is near. You feel like you are a million miles away from civilization…then you see this guy and he says ‘Mornin’, how ya doin’?’ in a Texan accent. 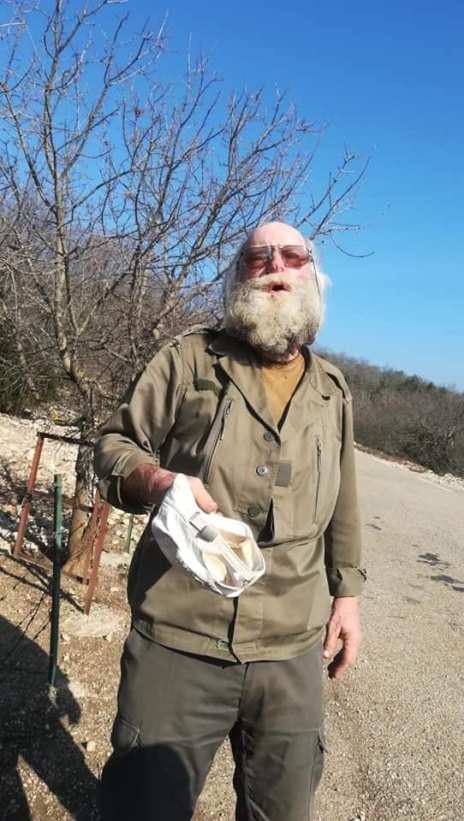 This is Bill Blue and he just passed away a few days ago, according to some friends in Provence. Bill lived in a hidden house right at the top of the Nesque climb and very often held court at the little parking lot / lookout that attracts cyclists and car drivers alike. His house has no electricity and he didn’t have a phone. He got his news of the ‘outside world’ from people he met every day. His closest neighbor is the honey maker 3 km down the gorge road.

Bill was not alone, though. He lived in this house for 30 years or so with his American wife and LOTS of wild boars. They were the guardians of the sangliers in these parts and claimed that this little corner of Provence was the only place these animals weren’t hunted. His wife has a real disdain for hunters and I imagine Bill did, too. Bill told me once that mother boars would bring their little ones to stay in their yard while she went hunting for food. In later years it seemed like they had at least a few that were totally domesticated. You would often see one or more in the parking lot snorting around.

But I suppose you might be asking yourself how a old man from Texas ended up in a house with no electricity in the wilds of Provence. That would be a sensible question and I have, at least, a partial answer.

Thanks to a book entitled ‘Les Hommes Irreguliers‘ by Etienne de Montety, I learned a little of Bill’s history (the book is a collection of stories about non-French soldiers who ended up in the French Foreign Legion).

Bill Blue was born in 1949 and was therefore the ‘perfect’ age to go to Vietnam and fight. He did at age 18. After a tough reentry into the US he became a truck driver (I was always amazed at how well he knew the geography of the United States – he could comment on just about any city a client of ours came from) and also had a cattle ranch. Apparently, he gave this up partly because he couldn’t stand sending his cows to the slaughter house.

In 1982, 12 years after coming back from Vietnam, Bill shows up in Marseille ‘looking for work’. He is quickly thwarted and is told that if he wanted to work he should go to the Legion. I’m sure there’s more to this story but for brevity’s sake that’s basically what happen, I guess. He ends up joining the French Foreign Legion, getting a pseudonym (John Barkett), and doing his 5 years (or more?) in far flung places. Bill was a sniper in the 2nd Foreign Parachute Regiment, a ‘job’ he had in Vietnam as well. I have been sort of fascinated by this story since I read it but never brought it up to Bill. I was tempted and even thought I should ask him for an interview someday, but I either never had the guts or figured Bill had turned a page and there was a reason he chose a life that must have been pretty different from his years of war.

Bill Blue was a fixture of this little corner of the world and he’ll certainly be missed. With a little luck his wife will stay on and continue the tradition. She’s just as much of a character as Bill was!

18 thoughts on “Bill Blue: Guardian of the Sangliers”