This year’s two Haute Route events have so far been similar to my entire academic career: half-assed preparation followed by showing up for the test and wondering why I am not doing better…or in the case of Haute Route Pyrenees, how I will survive.

So yeah, I never did lose that weight I needed to, plus the training has not been very structured compared with 2015 and 2013, but unlike me and academics, I did not fail!

I travelled down to Pau with John, plus Pierre and Brad – friends from previous HRs, Marmottes and Etapes. This is us with our pre-race smiles on on registration day. 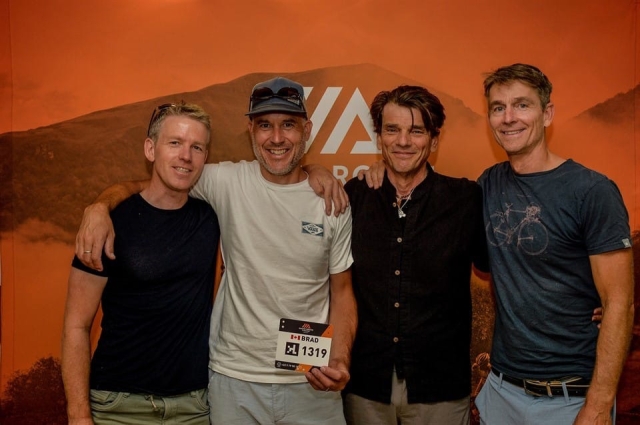 Every year Haute Route becomes more of a well-oiled machine and we had our bibs, backpack, travel bag, jersey and vest within a few short minutes.

Being an old hand at these things now, I usually only go to the the nightly Briefings the first day of the event, or if the weather is looking bad for the following day. I always feel slightly naughty about this, but time is at a premium at Haute Route and there always seems to be something ‘better’ I could be doing (see beer photos below). I’m glad I went to the first Briefing, though, because it was in a pretty outrageous little theater in Pau.

And so our first morning arrived, and after many months of fussing about this thing, here it was. More smiles, but if you look closely you can see the apprehension behind them.

We rolled out quite a bit through the outskirts of Pau before the ‘départ réel’ took place. This allowed me to take some rare race photos. Below are Brad (right) and Julian, who was sporting our Vicious Cycle kit from 2013 – quite well preserved, I have to say. 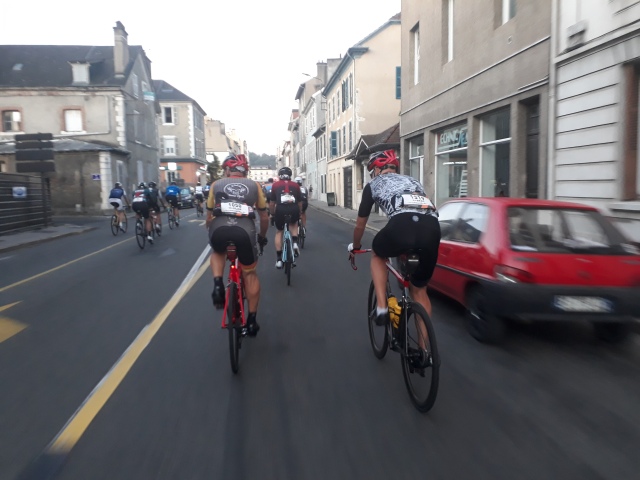 Then we hit the timing mat and all hell broke loose, or at least in my legs, mind and soul. Haute Route is filled with good riders and I found it hard keeping up with trains even on the flats this year. The long approach to our very first climb of the week (Col de la Pierre Saint Martin) involved 50 km or so of this vicious ‘accordion’ riding with over 1000 meters of climbing in the process.

Then the climb proper began and the pieces started falling into their respective places. It was warm, but not hot, and I climbed reasonably well given my ‘shape’ this year. I don’t really remember too much of the first part except seeing Brad drop his chain 3 times, then seeing Brad flying past me 3 times. What I didn’t see was Brad crash, but I would witness the aftermath later.

This happened around 4 km from the top of the first summit on the way to the end of the day on the border of Spain. I suddenly see Brad on the side of the road, arm stretched out towards me, demanding ‘water!’. It seems that he lost his bottle in his crash and was totally out. I didn’t know that at the time, so I was a little irritated when he proceeded to pour my precious eau on his head. All ended well, though, and he got another whole bottle from Will The Australian a little later and I made a quick stop at the next feed station to top up.

Meanwhile, John had done what John does and gone ahead on the climb. I was therefore surprised to see him looking hot and bothered at the feed station a few minutes later. I was in a state myself, feeling dizzy and disoriented, but after some orange slices and banana chunks I was myself again. We climbed a little together, then I dropped him for the only time this week and finished in high spirits and 147th on the day.

John crossed the line not far behind, but Brad and Pierre were going through some drama further back. Brad was cramping badly and couldn’t ride anymore with 3 or 4 km to go. If you can’t ride you have to do something and he walked, probably going not much slower than the riders anyway at those gradients. Pierre was also in a world of pain even further back and we simply never saw him again until the evening. He abandoned with 3 km to go (that was a nasty part of the climb) and the broom wagon breathing down his neck. I know that was a huge disappointment for him and we were sorry to see him go.

Stage 2 was from Pau to the old spa town of Bagnères de Luchon, which is far, far away and therefore meant an even longer approach to the one real climb of the day – Port de Balès, a 19 km monster that turned out to also be a furnace that day. I think that’s me on it below, wondering how the hell I would ever find the strength to reach to top.

I had an awful, awful climb and had to stop 3 times to have internal conversations and find a bit of shade. I had nothing left to give, which is not a good feeling on Stage Two of a seven day event. In times like these there’s only one thing to do, for me at least, and that’s to concentrate on each pedal stroke and nothing else. If you’ve done the training you will eventually dig yourself out of these holes and that’s what happened, apparently, because I made it to the top. I think I was in the 180s overall, which surprised me because I thought the whole world was passing me on that mountain. I lost 19 places on General this day.

John had a great day a flew past me on general classification. Brad recovered from the day before, too, but still finished behind me, I believe.

But it wasn’t all suffering and dying slow deaths last week. Every. Single. Night. we drank too much for people claiming to be serious cyclists. We blame it on Rich Velo, seated here with his Kwak while Brad looks admiringly from his Leffe. Rich was in the top ten overall till the last day, when he had a mechanical that lost him 1.5 hours. He also drinks like a sailor, so who are we to argue with a successful training plan like that?

There were more ups and downs during the week, but it’d take me the rest of this week to recount them all. The photo (far) below doesn’t look great, but it ended up being one of my best stages in the race. It was raining hard from well before our roll out and it never stopped till we did, which was early because Tourmalet (the last climb) was cancelled due to even worse weather.

I was dressed well and the extra fat I have this season served me well on the descents, so I was actually pretty comfortable for the two climbs we did (Peyresourde and Hourquette d’Ancizan). There were others out there who suffered badly from it, though, and I saw many shaky bikes going down those two mountains. Brad made a good point later – organizers will not bat an eye at cancelling stages with cold, wet weather, but they usually push through when it’s dangerously hot. I do see the difference in terms of safety on descents, but otherwise I would say that extreme temperatures either way can cause an equal amount of havoc.

Anyway, nobody I know was complaining that the stage was cancelled and we were happy to have a warm bus to hop into in Saint Marie de Campan.  That being said, I gained 9 places on General on this shortened day, so I will hope for at least a couple of days of horrendous weather next time I try this thing.

After 4 or 5 days of Haute Route some riders will do anything for an edge, and so it was with John and I on Day 5. We both hopped into the chambre below for some -150C cryotherapy. No clue if it worked, but it was cheaper and more legal than blood doping, so well worth the small investment.

Somewhere around this time Brad left us, too, although that was always on the cards. He was here in France on vacation with his family and headed back to Nimes after Stage 4, right when he was making a good comeback, I might add. Suddenly it was just me, John and Rich left.

Speaking of those who left, there were 364 starters at this year’s Haute Route Pyrenees and 84 DNFs by the end, leaving a finishing field of 280. That’s a 23% abandon rate…yes, it’s that tough.

In previous years I would have a good couple of first days then peter out the rest of the week. This week I was up and down the whole week, but finished strongly (relatively) on the last day, actually gaining a couple of spots. It makes a guy feel good that he has some semblance of legs left after 700 km and 19,000 m of hard, hard, riding.

John finished his very first Haute Route in 137th place, which makes him top 38% in the field. Overall, we are both pretty proud of ourselves and satisfied with our efforts. We are now heading to the Dolomites to watch our clients suffer for a change, then we turn our attention to Haute Route Ventoux in October, where we have a home field advantage. Let’s see how that works…