Thanks to German ingenuity and Canadian engineering, I think I’ve found my ‘big cycling thang’ for this momentous year.

Knowing (and dreading) that my 50th was coming up fast,  last year I was juggling about a few different ideas of what to do to put my mark on this half century business. I originally wanted it to be huge and tough, but after having done two Haute Routes already, I just couldn’t manage to come up with anything harder without taking too much time or killing myself prematurely.

Enter German ingenuity. One day, as I was telling Karsten about my non-plans, he just whipped off the idea that is the name of this article – climb 50 cols for my 50 years. Simple, hard, and maybe even fun. I immediately got online to see who else had done it and found one guy who did 50 cols during the whole year he was 50, and that was it. Our plan is to find 50 in a week.

Now, before you start thinking that’s really something, there are events held every year in France, Spain and Italy that do 100 cols in 10 days (Cent Cols Challenge) and there’s even a guy (Phil – the maniac who runs it) who climbed A THOUSAND COLS last season.

But even if ‘50450’ is not the toughest thing around, it’s got class and symbolism, which I’ve decided is important.

Karsten, not quite 50 but willing to pretend he is, will be joining me on this little adventure (in July). We are hashing out details now, but we think we’ve landed on something local (France and a bit of Switzerland), not too high (no Alps or Pyrenees) and new (most of it).

Enter Canadian engineering. I’ve been working on the route and have come up with the following rough sketch. Our journey starts down here, enters the Cévennes, where cols are a plenty, followed by the Ardèche and the northeastern edge of the Massif Central. We then have a col-less ‘transition day’ across the Rhone Valley south of Lyon before heading into the Jura for a few days (totally new for both of us) and finishing with a big, big beer or three on the shores of Lake Geneva.

Kind of makes me wish I was 50 every year. 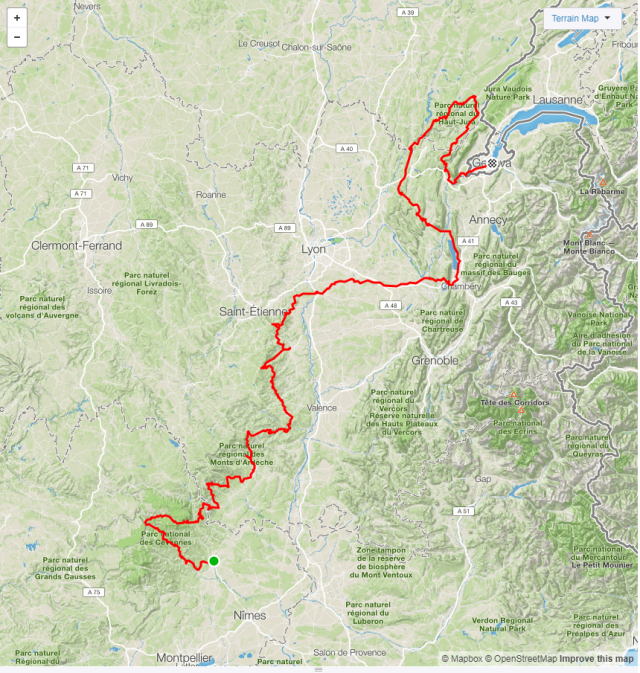