I once rode a bike and then I started riding it faster. My step-brother bought be a heart-rate monitor one year and I went even faster than before. A while later I got myself a power meter and I was still going pretty fast, but because it was a Garmin, I had lots of problems with it and I started to become frustrated with the numbers when they either didn’t upload, or recorded wonkily (data is only meaningful if it is correct, or at least consistent). Now, my power meter is someone else’s problem and my heart-rate monitor collects dust on the shelf my bike inhabits on my wall. Me? I’m just riding my bike, probably not very fast.

But I’m going to be coming up against a conundrum soon because, unlike this season, which had no BHAGs on the calendar, next year I’ll be 50 (how that happened, I have no idea) and I’ll most certainly have an objective of some sort to achieve. This means a structured training plan that will have me riding in all those zones I used to hate so much, but without the help of a HRM or power meter to tell me I’m in them.

What I’m going to try is to do is a full program on Perceived Effort, probably not using the below Borg’s Scale of Ratings of Perceived Exertion (except for the concept), but by remembering what Zone 4 used to feel like, for example, and pedaling into the pain cave in analog instead of digital. 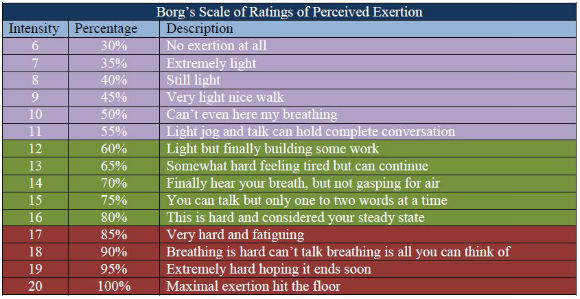 I’m aware of conventional wisdom about power meters (and at least HRMs) and I know that ‘the pros do it’. But I also know that the pros ride 30,000 km a year or more. That is, they put in the work regardless of what they have on their chests or their bikes. I could do more miles. Pros are also impossibly thin and I know I could go faster by losing a few kilograms.

There’s also the little issue of me not being a pro, or even having a history of being an elite athlete. What I want to say here is that even though I’m going to be 50 next year (really, where did that come from? I was 30 just the other day) I have a near infinite range of potential improvement ahead of me in my cycling career – if I want it.

We’ll see how it turns out. At least I’ll have something to write about for the next 12 months.

13 thoughts on “Training on Perceived Effort”