I’ve been hesitating to write this article because I really don’t want to give anyone a bad name, but at the same time, I’ve posted enough about my bike and its various bits and pieces that I think it’d be wrong not to. My compromise here will be not to name the manufacturer – but that is also not too hard to figure out if you go back in my archives.

I think my unrequited love story with my front wheel is coming to an end and I’m still at a loss as to know why, really. A little background, if I can remember the long, sordid tale: 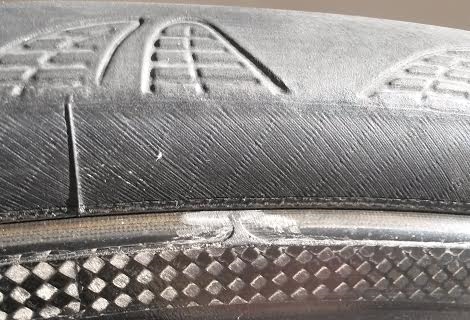 For the record, I have tried looking at other possible causes of the problem, like running my alu wheel on the Colnago to see if it was the bike and not the wheel. I still feel like it could be something other than the wheel, but that is probably just me doubting my sanity. Every time I’ve sent a wheel back to them they’ve found a ‘bulge’.

I am kind of at a loss of what to do now. They’ve gone ‘quiet’ on the email front and I have to say that they’ve been at least helpful throughout the whole process (other than not giving me a true wheel, I suppose). I would never sell that wheel, – and I’m kind of shocked that they’d even suggest it – since I consider it to be dangerous when braking hard.

And I didn’t say this to them, but why the hell would I consider buying another wheelset from them if I’ve had three brand new wheels from them with the same problem? It defies logic.

I think what I’ll probably do is keep this for a winter wheel (when I don’t generally descend giant cols). So, I’m in the market for a good, straight, front wheel, readers. Any suggestions?

23 thoughts on “A Wheel Shame”