If you know where to be this month in the south of France you have a good chance of running across team buses, hot bikes and Daniel Mangeas. There are no fewer than 4 pro races of varying lengths, all within easy reach of us. What I’m saying is, you may be seeing more of these types of posts.

Shoko and I drove down to Marseilles on Sunday to watch the opening salvos of the Coupe de France – the Gran Prix d’Ouverture La Marseillaise. It is also one of, if not the, first UCI race in Europe, followed right away with your next blog article, the first stage race on the continent (coming soon).

It’s fun going to these local races. They are often run by volunteers and the atmosphere is much more genial than the Tour de France. We got to Boulevard Michelet early and watched a couple of crits  with some up-and-comers.

And as luck would have it, we had our very own Le Corbusier building to explore between kiddie races.

Another nice thing about lesser-known bike races is that you can plant yourself near the finish line (or on it, if we wanted to…we really were early). 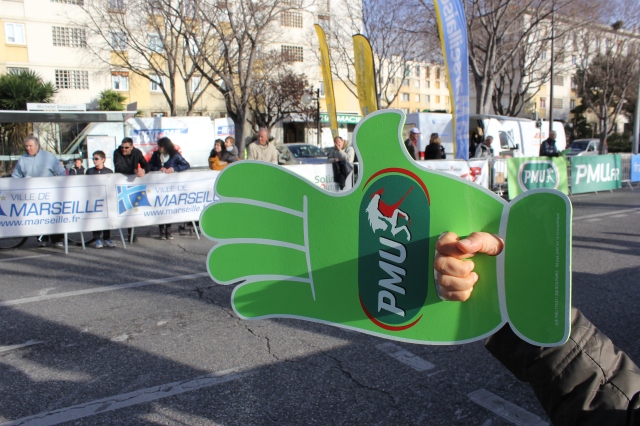 And if you needed another reason, you will have a chance to see and hear The Voice of Le Tour, Daniel Mangeas, who doesn’t do the TdF anymore, but still lends his hoarsy voice and encyclopedia-like knowledge of each rider’s palmares to many French pro races.

I’m glad we saw lots of things before the race arrived because this is what we got in the end.

This is Dries Devenyns, winner on the day, with Thibault Pinot hauling ass beside him. They broke away on the last climb of the day and finished about 30 seconds ahead of what was left of the peloton.

I saw even less in real life and Shoko claims they went by so fast she missed them altogether. Somehow though, it was still fun.