Haute Route has a Village at the beginning and ending of each stage where you eat, shower if you want, whimper like a child, park your bike and get a massage. It is also the place where HR’s sponsors set up their tents and hope you have the energy to come around and buy something. After the time trial on Stage 3 I finally got around to taking a stroll around the Village and didn’t get much farther than these guys, I’m happy to say.

This is Claud The Butler; two guys driving this old Citroen over the same cols as us (I nearly passed them going up the Bonette), hoping to arrive at the end of the stage and set up shop before too many of the riders have come home. 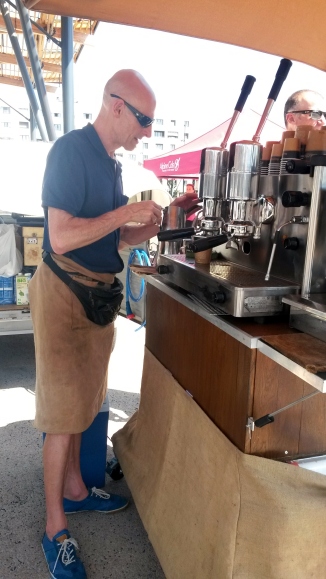 And they brew a good drop, I can confirm. Better than pretty much anything I’ve had in the 6 years I’ve been in France (but if you know French coffee, you might not be surprised at this). And look at that guy’s legs – they are cyclists to boot!

I gather that Claud (if there really IS one) follows major sportives in the UK and France, perhaps just parking at the end at some, or partnering with others, like in the case of Haute Route. Whatever the case, I had two wonderful cups o’ joe from these guys, which made the pain go away for the 5 minutes it took to savour. Merci.

8 thoughts on “Claud The Butler”