The summer is not really finished here, especially when compared to the snow Coach Rob has seen in Calgary in the past week. But the sticky roads of Le Sud tell me that it’s at least harvest time. Another thing that told me that is an email from Anne a few weeks back, asking for help for their vendage, which I finally took part in this year.

I helped a bit in the picking of ‘the little white grapes’, joining the crew like a seasoned pro…till I innocently asked Jacques if I should clip them close to the bunch or include the branches. His response: ‘we’re making wine, not salad’. I was found out pretty quickly.

But it’s not rocket science and I think I held my own out there, while it lasted. Erik and Anne, however, were inside, so I joined them for most of the time to help squish the grapes. 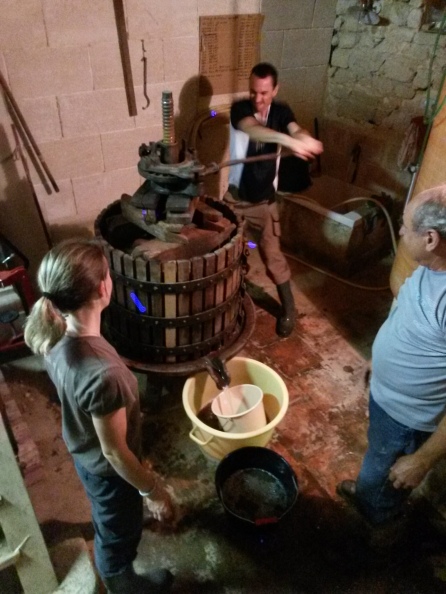 The press, Anne’s great grandfather’s, was pretty old but really ingenious, too. It did take some upper body strength, however, which cyclists normally lack.

Christian, forking out the remains of the grapes after pressing. There were still plenty left unsquished, though, which dictated more traditional methods.

The stomping of the grapes is something only a few years ago I had thought only existed in Peter Mayle books. Here’s Anne, bursting that bubble. 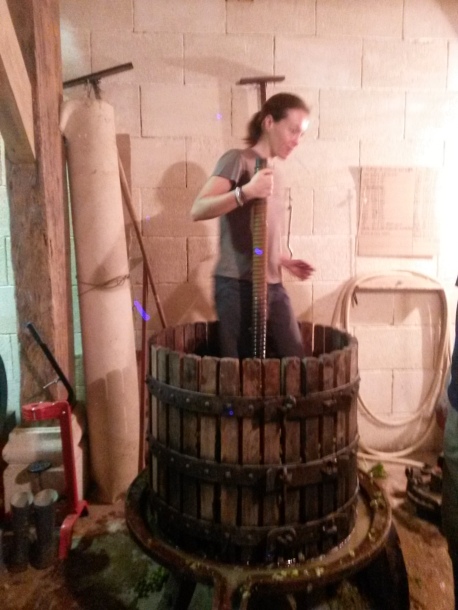 And Erik, taking an organic beer break between grape loads.

Everyone at this table is still out there working, but I had to excuse myself to come back home and blog about it.

For my meager efforts I was rewarded with this wonderful lunch, a bunch of wine from previous vintages, and a decent upper body workout. Thank you for reading this little interlude. Back to the bike next post.