This weekend I made my way to Saint Tropez for my 3rd Golfe de Saint Tropez Gran Fondo (No. 1 here; No 2 here) along with John, Erik, Anne, Karsten, Sarah and Christian (friends from Le Nord). My expectations going into this one were not that high, but I let myself believe in miracles.

One miracle did happen. It was a gorgeous Mediterranean weekend (okay, not really a miracle I guess). This the view from our B&B. Hard to find, but worth the effort in the end.

While we were at the port picking up our dossards we found some protein.

Rooms come at a price in Saint Tropez and we have a lot of sportives to pay for this year, so John and I ended up not only sharing a room, but also a bed. Thankfully a wide one. Erik was ‘kind’ enough to immortalize our arrangements with a photo.

The next morning came in with the sound of birds outside our window and the smell of coffee downstairs. It was also pretty mild, unlike last year’s drizzly, chilly start.

One of the unique characteristics of this race is the number of riders who pee on, or near, the yachts of the super rich. Act of nature or political statement? Either way, it looks satisfying. 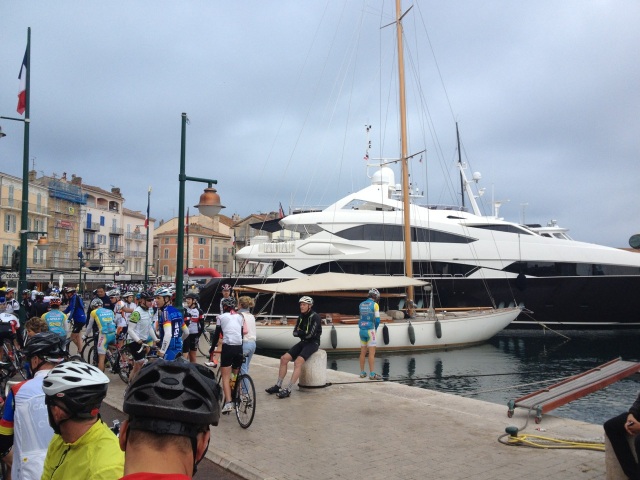 A Crashy Course The race began a little late, so right on time for the south of France. Like previous years, the run out of town was fast and ‘twitchy’. I had a bad feeling about it right from the beginning and it didn’t take long to prove my spidey senses aren’t dulled yet. After only 5 km or so there was an impressive crash in the peloton that looked just like the ones you see on TV. One guy goes down, bringing two others, and the domino effect takes over. John and I were very close, but sneaked through the carnage on the left.

Then, after a little climb, we started a very technical section of rises and falls with many sharp curves. On one of those curves, just ahead of me and to the right, a guy crashed into a wall. I saw it, but I was already gone when I heard some pretty sickening sounds of collision. I couldn’t look back, but immediately noticed I was missing someone. John ended up in that same wall, exploding his rear tire and sustaining some other injuries (including some butt road rash that I’ll spare you…but it’s on our FB page, which is not as PG as my blog). He spent a while in the broom wagon after being cleaned up by the ambulance, making a new friend in the process. 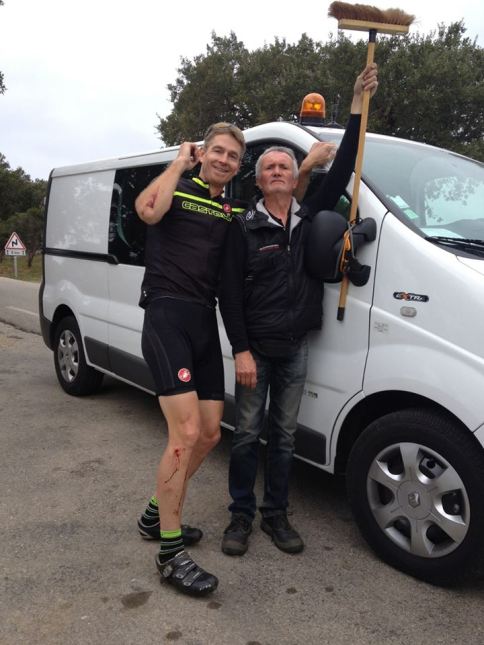 The next accident I saw (thankfully the last) was a guy lying beside an ambulance in a big bag. They were being careful with him. It didn’t look good. I spent the next hour wondering about John and then the climbs started hurting too much and I forgot. Sorry John. I was feeling alright, but I could definitely feel the extra 4 or 5 kg I am having the damndest time shaking off this year. The good news is that I seem to have found some new power in the legs, so that was a nice consolation prize and my climb times compared with last year are pretty close.

Mr. Apple  Rob will appreciate this. After the crash segment of the event, I caught up with a group that had M. La Pomme Marseille, from last year’s Haute Route. This guy was Rob’s ‘carrot’ for much of our week in the Alps and he never did catch him, finishing a place or two behind him in the category standings. He is a very intelligent rider and I did myself a favor and tucked in behind him for 20 km or so to learn from a master. The learning ended halfway up the first real climb when he decided he needed to go with the front group that had just split off from ours. I decided the same thing, but my legs had other plans. I had a good chat with him afterwards, though, and he’s doing Haute Route Dolomites this year. By the way, he is by far the best hairy-legged rider I know to date.

I think this is the sprint of the riders just behind me, although I’m not sure. 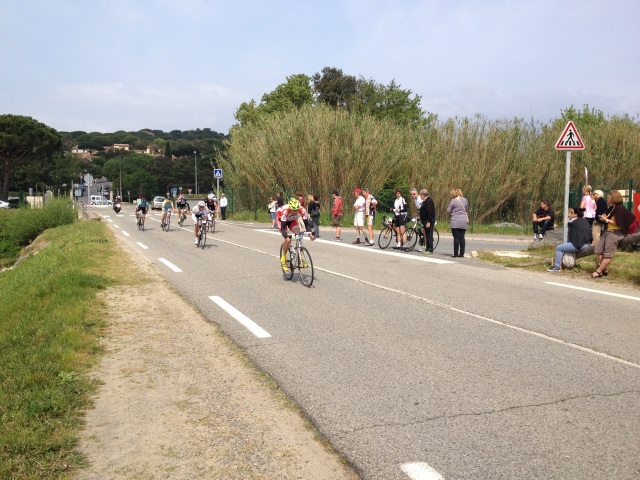 Sarah, next to a serious-looking Karsten giving John the pinky after the race. On the table are the remains of the paella that was served. After 4.5 hours of figs, gels and pain d’épices, real food is always a nice change.

And finally one from the foggy lens of my phone. Anne and Erik, who is sporting a new look (gilet headband) and proving that we did have a wonderfully sunny day.

10 thoughts on “Those Aren’t Pillows”