I normally don’t put up photos of Cycling Languedoc’s tours here, but Shoko bought a new camera when she was in Japan this summer and I got to use it a few days ago. Some of the photos just need to be shared. Also, I haven’t been doing much myself, so other people’s triumphs are a good 2nd best.

This was CL’s first supported Ventoux Triple and, if you have ever done one of these things (or done the math at least), you’ll know that it’s a long day. I left home at 5am to pick Simon up in Gordes at 7. Gordes looks nice even in the dark.

Kilometer Zero. When everyone is still happy.

John gave me the idea for this shot (he took the same one a few days earlier on another tour), which is of one of the only hairpins you will find on the Bédoin climb.

Further up, past Chalet Reynard. It was an eerily quiet day on the mountain. I could hear heavy breathing from a couple hundred meters away.

The Cycling Languedoc Mobile, even equipped with spare bike. How pro is that…?

Hiking is apparently also an activity people do on Mont Ventoux. Maybe they don’t have a bike. It’s the only explanation.

I yelled at Simon to get ‘dancing’ on this last hairpin, but he was already there. 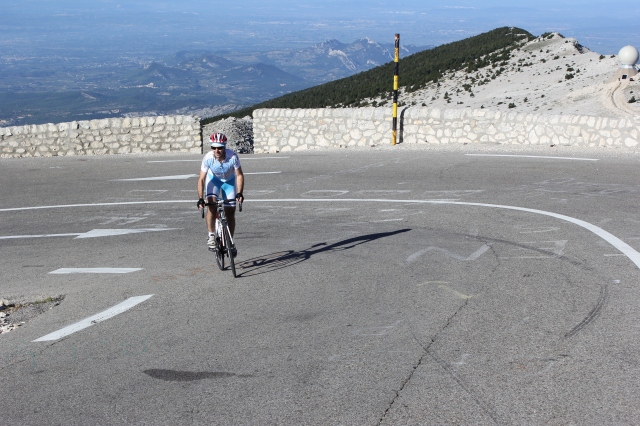 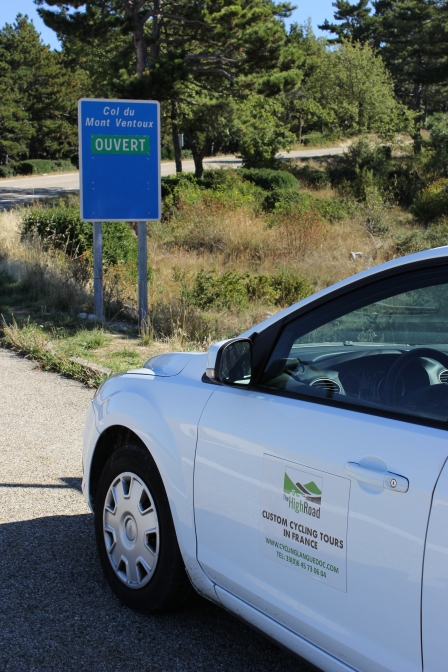 Coming up the Malaucène side. This is where the reality of the Triple usually hits home…hard. And it did.

But he made it, still smiling. A gorgeous, newly-paved 26km descent to Sault followed, then some ice-cream, a chat and it was on the road for the last push.

The route from Sault meets the main one at Chalet Reynard and the last 6 km are the same. They don’t feel the same, mind you (after around 3800 meters of climbing), but they are.

Here is what ensued at the top of Simon’s last ascent. 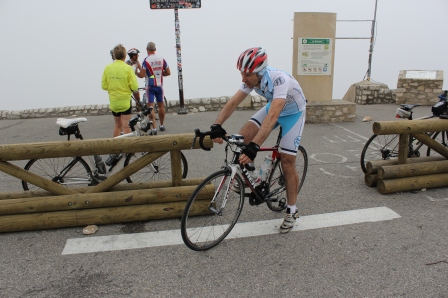 He was understandably wrecked, but as you can see from the photo below, made a quick recovery.

Then there was one more descent, a rental bike drop-off, a bit of kit shopping, and the drive back to Gordes in time for dinner. Me? Made it home at around 8pm, which meant a 15-hour day. Trade it for any other job? Other than Ernesto Colnago’s bike-ride tester…not a chance!