I woke up this morning wondering what to do (much like I am right now actually) for the next day up in Peak Week. Erik and Anne weren’t around to tell me where to go and I really didn’t want to drive back up to the Cévennes again. Not wanting to put much thought into it, I set myself on auto-pilot and ended up here. 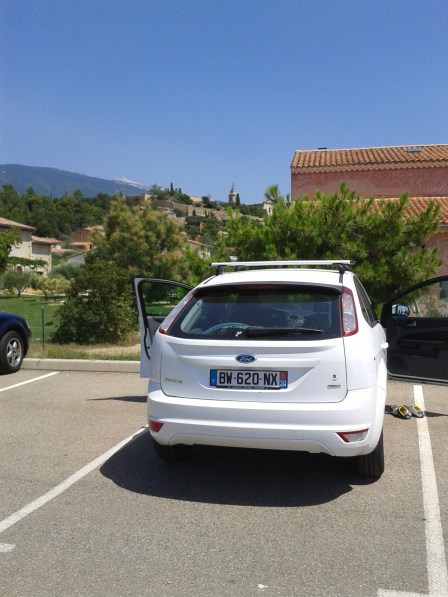 For the keen sighted, that’s Mont Ventoux in the distance. I had to park outside the village for the first time because it was market day. Other than there being no toilets, this parking lot was great, and I could strip down à la française with not much of an audience.

I intended to do either 1.3 (one climb and a Chalet Reynard-Summit hill repeat) ascents or 2. The 37 degree heat in the forest dimmed my motivation a tad and I ended up doing ‘just’ the former.

At the top the first time I snapped these three photos in literally a minute. There is a steady stream of people wanting their own souvenir of Mont Ventoux all day long. You need to be quick and assertive to get yourself in there before hypothermia sets in (not a problem today, mind you). 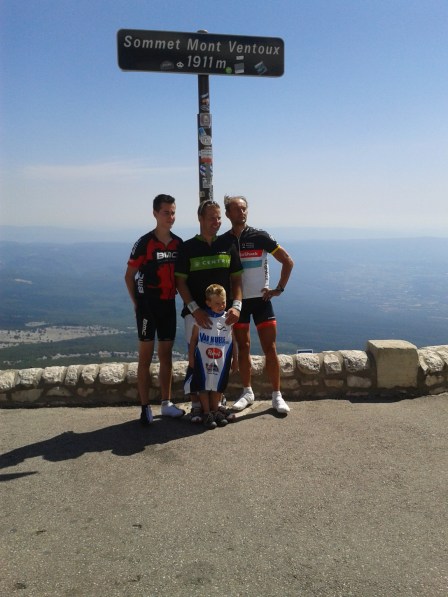 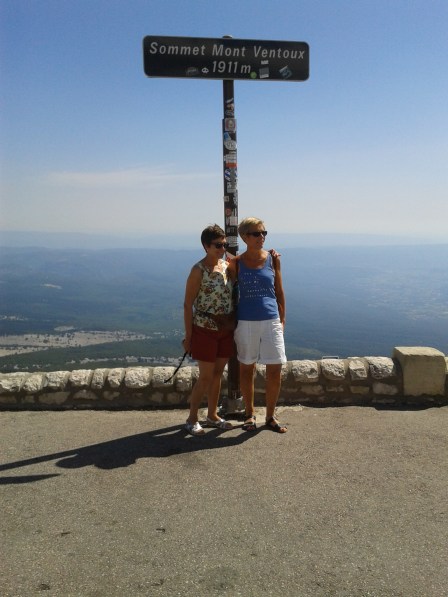 And I found something new on top of Ol’ Baldy. The summit is now one way for cars (they need to take the road on the right then loop around, which I think is a good idea. They have also added this lane for cyclists (middle of the photo), which I think is a good idea in theory. The trouble was, when I came up the first time there were a bunch of pedestrians walking up and down, 3, 4, 5 abreast, completely unaware that there might be someone cranking around the hairpin, and who certainly wouldn’t want to put a foot down a few meters from the top, having spent the last 1.5, 2, 3 hours suffering up the mountain. I did a lot of yelling ‘Attention!’ and got through the crowd unscathed. Still, I can see some issues with this new arrangement.

I think a better idea would be to make two equally sized lanes. One for Belgians and Dutch, the other for the rest of the world. That would even it out nicely.

How am I feeling? You’re so kind to inquire again.

My time up from Bédoin was 1:37 and the heat in the forest slowed me down a little I think. I’m taking this time as a good sign for Haute Route, which will be a lot tougher of course, but the legs are still working after 5 days of hard-ish effort. I am sure that the key to success in Haute Route (where ‘success’ = ‘finishing’) is miles in the legs. You can fake it through one or two days if you’ve done some training, but my impression of this event is that reality hits on the 3rd day, then keeps sticking it to you for 4 more after that. I feel about as good as I can with my legs at the moment. My knee doesn’t even hurt too much, which is also a great sign.

On my final descent I stopped for a fill-up at the Fontaine de la Grave (great water!) and ran into this friendly Dutch couple. They were hiking, but the conversation took a quick turn towards cycling. Turns out the guy is ‘Diable Ruud‘, a mad Ventoux climber who has done it something like 127 times (correct me, Diable, if I’m wrong). He is called ‘Diable’ because he has done 5 climbs in one day. Yes, you read right. That equates to 231 km and 7,663 m in elevation gain. Diabolic indeed. His wife, whose name I didn’t catch, has also climbed Ventoux many times, including multiple Triples. Just when you thought you were something pretty special, you meet people like this!