Well, that was quick. A couple of blog posts, as many Facebook status updates, and whispering into a few of the right people’s ears, and we have a full contingent (9) for the Haute Route 2013! There’s lots to read in this post, so I won’t bother you with anything unnecessary up here. This is our multinational team, currently lacking a name, but luckily not legs (check out the action shots!).

Short Background: I’m a Network Engineer by day and an athlete by night. I started cycling at the age of 9-10, racing mountain bikes for a few years before moving into Road Cycling. In the last 2-3 years I’ve got more and more hooked on climbing after visiting the Alps. I spend most of my free time on a bike (or recovering from pain inflicted while on a bike). I met Gerry during the Etape in the Pyrenees which has somehow led to me signing up for this challenge.

Power: Current average of around 250W although a recent professional fitting seems to be pushing the needle up significantly.

Why am I riding Haute Route: Because I love climbing and pain – why else 🙂

Short Background: I grew up outside of San Fran. My passion (obsession?) is riding up steep hills, most of which I do in the Southeastern US Blue Ridge area. I have always wanted to climb the legendary hills in the French Alps, so the Haute Route is a dream come true for me.

Short Background: I retired from the Navy 11 years ago and I now work as a senior operator at a nuclear power plant  I started riding in my early 20’s when I lived in upstate NY.   I thoroughly enjoyed club racing but, being in the Navy, didn’t stay on land long enough to train to be competitive.  Life interfered a bit and set other priorities between then and now so the bike and I didn’t see each other as much as I would have liked.   I started riding again in earnest a few years ago and found I still have the passion I had for it all those years ago.  Very excited to say that next season will see my return to the racing scene.

Why are you riding Haute Route?  For me, it will be the challenge of a lifetime.  How could I possibly not accept such a challenge?

Short Background:   My partner Gwynneth and I have two daughters 5 and 3.  I work in Calgary as a Petroleum Geologist and with whatever spare time I have…..I ride!  I discovered Mountain Biking in my late 20’s on a ridged frame Bianci…and thankfully bike science saved me from early onset arthritis with the introduction of front and rear suspension.  Since then, MTB had been religion to me….until I had kids.  After kid number two and moving to Bragg Creek(50km west of Calgary) the road bike became my work horse.    At the age of 42 I decided to take up the challenge of road racing and joined a local club out of Calgary(Calgary Cycle-Team Top Gear ROAD). 30lbs later here I am….I now race locally at a Cat3 level which has been a great journey in itself.

Why are you riding Haute Route? I did the backcountry ski version of the Haute Route(Zermatt-Chamonix) a few years ago with my Dad and Brother.  The Haute Route by bike will be equally as spectacular.   I’m always up for a new challenge on my bike!

Short Background: I ride less than I should but more than my wife would like. Spent two years as a French club rider in the beautiful, dry & hilly Languedoc, now riding in a wet & flat Cambridgeshirt. I started riding road in 2009, following several years being a fat bloke riding off road.

Why are riding Haute Route? In all honesty, because I’m stupid. But on reflection, it’s the challenge of a lifetime & I’ve a year to get training!

Short Background:  My favourite things about biking are that I think that I’ve discovered the Fountain of Youth (look at Rob – he can outride guys 30 years his junior) and I plan to live to a 100 so anything that keeps the body clock dialed back I like, and when I vacation I take the bike and ride every steep hill that I can find – actually the criteria for our vacations are that mountains are nearby.  My photos are from riding up the Col de la Croix de Fer and Alp d’Huez a couple of years back.  I’ve been on the bike for about 10 years now and ride about 10K per year.

Why are you riding Haute Route?  Mostly because it’s been a couple of years since I had a season goal for riding which makes motivation a bit hard.  This will eliminate any issues with motivation…I’m already working on my training plan for next year – hill repeats on Highwood Pass (Canada’s highest paved road) figure a lot in my future, as do a lot of long, boring days on a trainer.

Age: Older than Rob A.

Place of residence: Fairmont Hot Springs, Canada & Scottsdale, AZ, USA. (Guess which season I spend in AZ). I have been riding for 25+ years. Mix of Triathlon (The early days), and recently road, and mountain.  During my annual sojourn to Scottsdale. I road ride on average 1,000 k per month (600+ miles). Back in Canada I mountain bike more, and this year hooked up with the “Phat Boyz” riders out of Invermere, BC. I thought I could ride until I started riding with this group. They humble me with their skills going downhill “fast”. 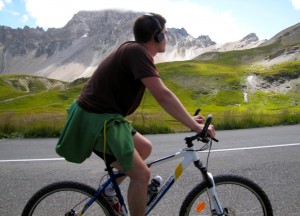 This is definitely NOT Rob

Short Background: Married 30 years to the only women in the world that will put up with me.  We have a wonderful daughter, Nicole that lives and works in London England as a Senior Brand Planner for M&C Saatchi.  I have a passion for all things related to Health and Wellness and a burning desire to retire to the South of France to be on the same side of the Atlantic as my daughter, and never again have to ride on an indoor trainer.  My goal is to break the world one hour record…….when I move into the 100+ age category, so I have a few years to train and get in shape.

Why are you riding Haute Route?  I just took up cycling a few months ago because I was told I should be more active, so Gerry suggested Haute Route would be a pleasant way to see if I enjoy this cycling thing.  At a minimum I figure it will be a nice and relaxing way to see the French Alps.  I mean really, how tough can it be; you even get to sit down when you’re turning those pedal things.

Picture attached is about as intimidating as I get.  Some people have suggested, I’m not competitive enough and I need to work on my confidence problem.  Hopefully will be good therapy.

Biggest Challenge Associated With Haute Route: Trying to get the two or three weeks that I’ll need prior to the race to prepare.  Also learning how to get in and out of these clipless pedals without falling.  I figure it should be pretty easy after I figure that out.

Anything else you would like to add:  Yea, I saw this video that helped me better understand cycling.  I’m sure I’ll never think or act like this guy in the video, as he seems a little nuts about being a “cyclist”. http://www.youtube.com/watch?v=47cGzu6-q40&list=UUw33uB-bHbUM7XbUrVbgbAQ&index=2&feature=plcp

Short Background: It seems a little strange to fill in this part on my own blog. After all, you know everything there is to know about me already. I’ll just say this: if you were to have told me, as a young boy growing up in the remote countryside of Gaspé, Quebec, that one day I’d be riding with a team of strong, determined riders from Geneva to Nice over God-knows-how-many mountain passes, I’d probably have said to you….’What’s Geneva? And who are you, anyway?’.

Why are you riding the Haute Route? My coach told me to!

Anything else you’d like to add? Yes, I find myself strangely excited about this new adventure, and I think one reason is because it is going to be with a group of like-minded individuals. I am still in awe of the speed in which our team has filled up (we have an ‘overflow’ even – more on that later) and the way that those who have accepted this awesome challenge have jumped at the opportunity to do something that – and let’s be honest – most folks couldn’t comprehend. The fact that all of us on this team CAN comprehend what this means (particularly concerning the next year of training) makes it even more impressive that they are willing to put themselves through it!

Now…anybody have a name for us?