Thanks to some of you very readers, I ‘chose’ to do an Etape Double this year (you might remember the poll I took last year) – two stages of this year’s Tour de France; the first being the Alps and this one – Act Two – in the Pyrenees. In these two epic days of racing I would attempt to haul my arthritic knee over 10 categorized mountain passes, with around 9000 meters of vertical climbing over 350km of road. For those not familiar with climbing and racing, I can’t help you, actually. I have no idea how to compare it!

I hope you are in the mood to read today, by the way. Listening to Coach Rob for once, I broke the blogger’s Golden Rule and left my camera behind at the hotel the morning of Act Two, so I could devote all my meager energies to the task at hand. However, I have good news. Because I don’t have any photos to spark my memory I will keep this brief and general, so you can get on with your day. Here are some random thoughts to start us off.

Being Canadian Has Its Advantages

Coming, as I do, from a cold and inhospitable clime, might have benefitted me a little last Saturday. The weather, after the beginning of the first climb (Aubisque), was wet and cold. I know my wet (from Vancouver) and my cold (Quebec) pretty well and I found that I didn’t have the massive shakes I saw all around me, especially on the descents. There were cyclists actually riding with those tin foil things you wear for hypothermia at the end of the race! I’m sure it was necessary, but a metallic cape flowing behind you as you cruise down the finish line is a pretty lame look. Anyhow, I found I had plenty of energy the whole day this time and I’m not really sure if it can be chalked up to the weather, but I think it helped a bit.

If You Come from a Place Named Condom, Leave Your Club Jersey at Home

You all know the famous town in France, I’m sure. It’s at the receiving end of many British jokes, I’m sure, and I’ve heard that the English will travel there just to get a photo in front of the town sign. To make matters worse, the river that runs by Condom is the river Baïse, which, without the double dots on top of the ‘i’, means something pretty vulgar in French, too. In short, when you are entering an event with nearly 50% native English speakers, you might want to wear the training jersey. By the way, this was the only time I was dying for my camera during the race.

The Perfect Training for an Etape is another Etape

I really felt dynamite most of the day on Saturday and one reason might have been the result of the principle of overcompensation, where you push your body so hard in one (or several) go that the organism not only rebounds to its previous condition, but overcompensates for the abuse you gave it by peaking even higher. I have no idea if the timing was correct for this ‘peak’ (the Etapes were 6 days apart), but as I said already, I had energy from beginning to end this race and I’m guessing that the previous race had something to do with it. Here’s my only in-race photo, taken by a pro. He was kind enough to Photoshop a bunch of guys behind me to make it look like I’m leading a giant peloton. 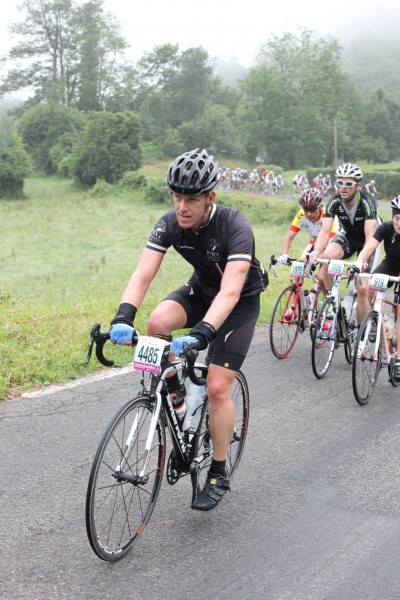 The Human Body is a Pretty Cool Tool

Look, less than two years ago I was a slightly ‘husky’ 77kg, with the idea that I was fit. I am now around 66kg (I’m afraid to step on the scales after 3 days of post-race reveling) and in the best shape of my life. And here’s the kicker, I’m still a universe away from being an elite athlete. To me, my results (scroll down if you can’t take the waiting!) are astounding and, as I probably stated in my last article, beyond the wildest imaginings of this nouveau athlète. Your body can do really incredible things if you treat it right (or abuse it regularly, depending on how you look at things).

My ‘teammates’ and I (John and Peter) have been riding our bikes hard 6 days a week since January 1st pretty much. This has been hard to do, you may be able to imagine. I think I’m nearly up to 8000km for the year, which is about 5 times as much as I’ve put on my motorcycle and 2000km more than this time last year, which was not light either. Although I knew this reality before I have never applied it with such vigor, so I wanted to share this with you. Without sounding too much like a Nike commercial (they’d say something infinitely cooler anyhow), there are no short cuts.

Last year I raced a bunch of times and finished anywhere from bottom 20% to top 30%, but basically I was ‘average’ throughout my first season. My big objective this year was to be better than that. I am pleased to announce that I am now ‘good’. I’ve finished in the top 20% in the few races I’ve done this year and in both Etapes this year I am just about breaking the top 10% (12% in both). Here’s the damage for Act Two:

The mind is also a strange creature, if I may say so. It took me literally minutes, after reading the above results, to start thinking that was the new normal, and wondering what I could do next year. The answer is far from clear, but it’ll be a fun road to find out!

According to Rob, Peter has lost 80 pounds since last summer (36kg). You may know his story already from my blog articles, but if not, look here, here and here to get yourself up to date. Peter came all the way from Canada to live his dream of doing the Etape du Tour. He did the exact same training program as I did and stuck to it pretty religiously, from all accounts. He showed up to finish the race – probably the toughest the organizers have ever put together – and with his new wife looking on… 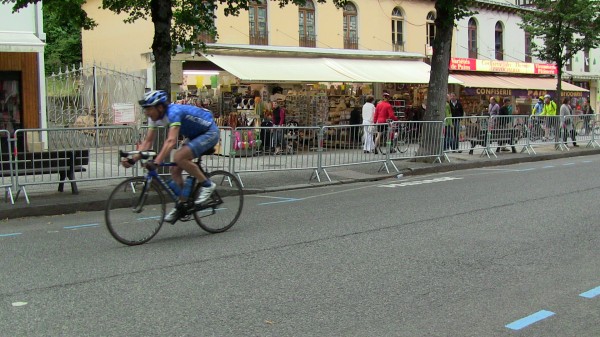 Peter spent over 11 hours in cold, treacherous conditions to finish this thing and, although he was walking like he had just escaped from months in solitary confinement, he was, in his own words, floating on air.

John came to support his teammates 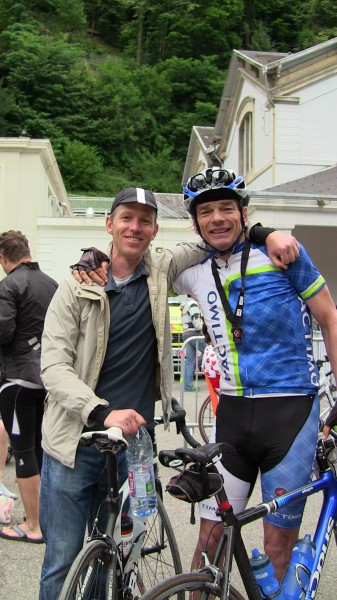 Thanks everyone for following along this season. Luckily for this blog (and my sanity), there’s more to come!

Final Note: Next year I’m planning on running an Etape du Tour Tour, which will include a few days riding in either the Alps or the Pyrenees, accommodation, and most importantly for this event, logistics! Stay tuned to the blog, my website, or simply contact me if you might be interested: gerrypatt@gmail.com.