Sucking the Wheel of Europcar: A Very Short Story

Today I began what will be an unknown number of days of 100km rides, taking a page from Coach Rob’s ‘training camp’ that he does at his place in Arizona each year. This year, despite 44 degree heat, Rob managed 1280km in 14 straight days. I’m aiming for something a little more conservative and definitely in the single digits when it comes to days.

But that’s not why I’m writing today (again). On my way out to my turnaround point north of Montpellier I saw the guy below coming towards me, riding in the slipstream of a Vespa. He was totally kitted out in Europcar gear and his bike was the same Colnago that they ride. A pro!

I nodded as he whizzed by; he gave me a cursory glance. Then a few minutes later I heard the buzzing sound of the Vespa behind me. What luck! Without thinking it through I jumped on his wheel as they passed me and frantically tried to keep up with them. I wasn’t sure of the etiquette of latching onto a pro when he’s out training, so I kept a safe distance, limiting my ability to stay hidden in much of their slipstream. Still, I had some, and I kept up with them for a couple of kilometers before a headwind and an unnatural twinge in my calf muscle made me think better of the idea.

I don’t have any idea who this was. I only really know Voeckler and Rolland from this team. Does anyone recognize this man’s bum? 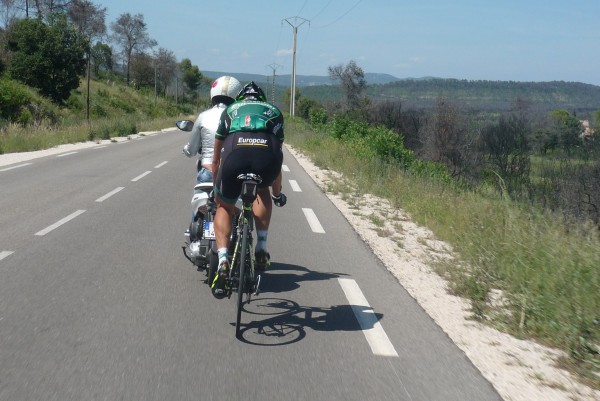 2015 Update: A chance introduction at a bike shop in June this year solve the above mystery. John and I met Sebastien Chavanel, who was cleaning his bike at the shop. After learning that he lived in the area, I remembered that he used to ride for Europcar. A quick Tweet message to him confirmed that this was indeed his butt flying down the D1. He even suggested a ride someday, so I might be sucking more wheel in the future. I’m sure it’ll be a very short story again. 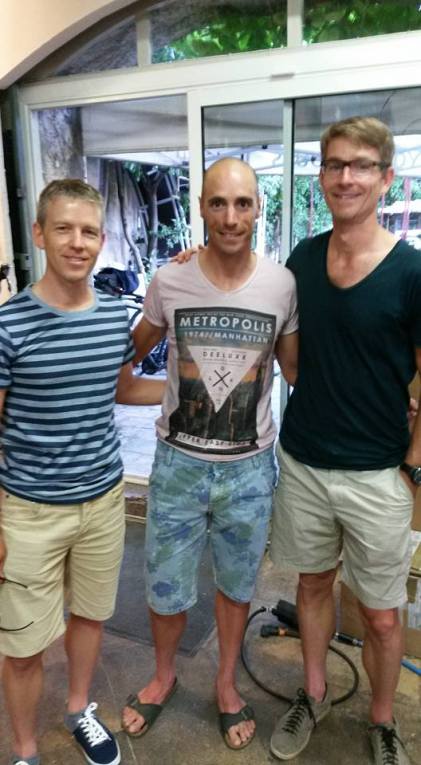 9 thoughts on “Sucking the Wheel of Europcar: A Very Short Story”