You may remember that this season I decided to go with a more traditional cycling weight-loss program; that is, forking out money I really don’t have to lose what non-cyclists might call ‘an afternoon snack’ – One Kilogram. This substantial weight savings was to be achieved by upgrading my wheels and group set. You can read about the progress here and here if you like.

Well, it’s done and I’d like to tell you all about it, if you don’t mind. First, the facts:

Before I get to the review section of this post I’d like to address what I’m sure you’re already thinking to yourself: Gerry, why didn’t you just buy a bike that cost 4380 Euros (upgrade+original bike price) in the first place and get an even better machine? The short answer is that I should have, but I see from the thousands of forums out there on this very subject that I’m not the only cyclist to upgrade his/her bike. I really didn’t know anything about the importance of weight and the quality of components when I bought the Bianchi. At least I bought an excellent frame that is light and rigid, otherwise I might be visiting divorce court instead of just the poor house this season.

Did I feel the weight difference? Yes and yes…I think. You all know how much your bike weighs without probably even knowing the numbers. You can tell when you’ve forgotten your water bottles for your ride when you leave home (assuming you need to lift the bike of course) because of the lack of weight, I’ll bet. As soon as I picked up the Bianchi at the shop after the assembly I could tell immediately something was missing…in a good way!

But I really wanted to know if I would feel the lightness on the hills, so I did a couple of my usuals today to find out. There was a difference, I’m confident enough to say, but I’m not sure if it was the weight or a combination of several things (more on that later). The result was that I was climbing at a faster pace than usual (1 to 2 kph) and this is after 5 days off the bike stuffing my face in Istanbul. A good sign, I think.

The Wheels (Steve, are you reading this?)

Yes, yes, yes! Did I say ‘yes’?! This was the first marked difference I noticed when I hopped on the ‘new’ bike. The Bianchi wants to roll faster now, all of a sudden. When freewheeling it is faster, when pedaling it is faster and when descending it seems much, much faster, so I’m really content with this new addition so far. I’m thinking that the pedaling speed could also be a combo of the new wheels and the new transmission, but the descending can only be the wheels. I was hitting 50kph on the back side of my place with no effort at all and I took one of my favorite corners on that descent nearly 3kph faster than usual, going at it even a little conservatively, I thought.

I’m not really sure about the flats yet because it was blowing so hard today. It has to be better, however, since the descending is. I guess the improved rolling of the new wheels could help my climbing as well, since there should be less resistance theoretically. That’s why I’m not sure if it was the 1kg I have saved or the wheels that made me climb faster. I guess in the end it doesn’t matter.

Camgagnolo are famous for their craftsmanship and attention to detail and I found this immediately evident on these all-important components – the ones we interact with the most on the bike (with the possible exception of the seat post if you fiddle with yours as much as I do!). First, they are really ergonomic compared with the Shimanos I had. There’s a left and right that are shaped to fit each hand. Here is the left hood; you can see how the hand would fit ever-so nicely on the top – and it does. To be honest, I don’t find it much more comfortable than the 105s, but maybe over long distances I will.

The hoods are also smaller than the Shimano, even though this next photo doesn’t show it very well. I noticed it right away, though, and at least for me, it feels much better.

In this photo you can also see the curvature of the brake levers. These have been designed  to curve in towards the drops so that braking is easier from them (particularly useful on descents). This was something I got right away because I didn’t need to adjust my hands at all to reach out for the brakes, i.e. they were right there, unlike the Shimano, where I had to sort of wrap my hand around to the outside a little to get hold of them. This won’t be an issue for people with big hands, I guess, but a welcome surprise for little ol’ me.

This top shot shows something strange sticking out of the side of the bars.

This is the shifter that changes the cassette (right) and gear ring (left) and is the most obvious change on the bike from Shimano. I wonder how many rides it’ll take before I realize that the brake lever really doesn’t do anything but brake..? There’s a shifter right beside the brake lever, just like Shimano, but you need to remember to use the thumb, too, which I’m sure will become second nature soon enough, But…

…I’m not sold on the positioning at all yet. From the hoods this is where the shifter is. 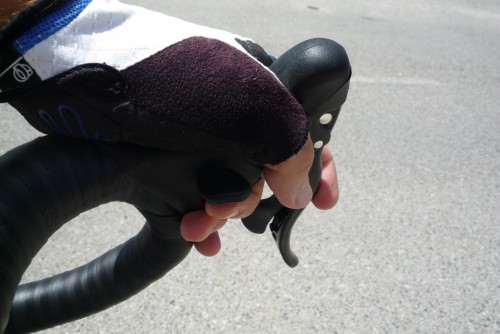 Meaning, to shift you need to moved your thumb back then down – a seemingly unnecessary move. It can’t be as fast as using your fingers on (or next to) the brake lever, like Shimano. This is the photo from above to show the position from the drops, just as weird, for me so far. It looks natural in the picture, but I needed to reach up to depress it, and then, because of the lack of control on the pressure, I was shifting down two rings at a time.

This is something I expected, having ridden Karsten’s bike a little bit last year, and I’m surprised I haven’t found other people talking about it in the forums I read before buying the Chorus. This tells me that either it’s going to be a non-issue once I get used to it, or people are too afraid to dis Campagnolo (the Apple – when Apple was cool – of bike components, in my understanding).

But shifters are about shifting, too, and this is where Campy shines. People always talk about the ‘mechanical’ feel or sound to the shifting and this is evident right away. Unlike my old Shimano, where I felt I was always pushing the derailleur into gear, Campagnolo just clicks (or ‘clunks’) and you’re there! You feel the mechanics of the instrument, if you follow me. And it works. Well, today it worked.

Then there’s this little gem: when clicking up the rear cassette you can go three rings in one push, and when going back down (harder) it allows you to skip FIVE. Five, I’m not sure about, but 2 or 3 I can easily see being useful. When? For instance, after cresting a hill with an immediate descent you might want to skip a few as you pick up speed quickly on the way down. Definitely when ‘dancing’ on climbs, since I usually have to go down 2 rings when I leave the saddle. ‘Punching’ up hills, same idea. On the other side of things you might need an easier gear when things suddenly ramp up on a climb and shifting up 2 rings in one shot can save time and effort, I imagine. A handy little addition.

I have no idea about what happens around the crankset, other than it propels me forward and gives me no end of grief when I drop a chain. So far everything seems to work just fine with the Campy and I’m assuming I’m getting more power with it, since everything is stiffer and built for more power transfer. But that will remain a guess, I think.

You might know that I’ve gone from a triple to a compact (how glad am I to be rid of that shameful extra ring!), and I’m discovering that I have to re-learn some things. The two main rings on my old set-up were 50 and 39, which were not too far apart. So, when I shifted up to the big ring, for example, I could achieve around the same ratio by just shifting up one or two rings on the cassette (skip this section if your eyes are starting to glaze over). However, now I have a 50 and 34 and the difference seems huge in comparison. I haven’t check any charts yet, but it seems to me that to get the same ratio after shifting to the big ring I need to go up 3 or more on the cassette, that is, the multi-ring shifting capabilities of the Campy will come in handy yet again! If you made it through this paragraph, I applaud you. This is about as technical as I can be, so it only gets better from here.

I’ve already mentioned the multi-ring shifting abilities and I suppose that also has something to do with the rear derailleur, pictured here with the last you’ll see of the shiny chain and cassette, I can almost guarantee.

The last thing I should mention is the brakes. The improved cornering with the new wheels meant I didn’t have to use these things much today, but when I did I noticed two things: they work really well and the levers are very sensitive, i.e. easy to depress. This 2nd fact makes it a joy to brake from the hoods, even when using the middle-to-top of the lever.

Time will tell whether the investment was worth it, but if my impression was right about the increase in speed then I think I could possibly be looking at a couple of extra kilometers per hour, but then again I’m an eternal optimist. At least I now have a machine that demands respect, even if its rider doesn’t.