To be honest, I’m scared merde-less of this one. Act One is bad enough, with 150km or so, but this creature has about the same amount of climbing (lets say 4500 meters, till I figure it out) and is just about 200 km long. Firstly, I’ve only ever ridden 200 km once or twice in my short life, and secondly, I am pretty sure it was flatter than the Pyrenees. So call me what you want. I’m trembling.

This classic route starts in Pau, on the plains, and dives south on what looks to be hilly terrain, finally entering into the Pyrenees National Park, where we’ll be stuck for most of the rest of the long day.

The first climb is the Col d’Aubisque, a Hors Categorie mountain pass that is 16.6 km and rises 1,190m, an average of 7.2%. In comparison to My Ventoux, it is about 5km shorter and a fraction less steep. Still though, it’s only the first of 4 big climbs this day.

The Aubisque has been used in the Tour de France an incredible 42 times since 1947 (and just about every year before that back to 1910), so it is no stranger to legends; leaders at the summit (when it was not used as a stage finish) include Fausto Coppi, Charly Gaul, Eddy Merckx, Miguel Indurain and Cadel Evans.

Probably the most famous (or infamous) event that occurred on the Aubisque was the awesome spill that Yellow Jersey wearer Wim Van Est took off a cliff on the descent in 1951. Van Est took a turn bad and wiped out, getting chucked off the mountain and falling 70 meters in the process. He survived, but had to be famously hauled up using 40 team tires that were tied together! Ah…the good ol’ days. 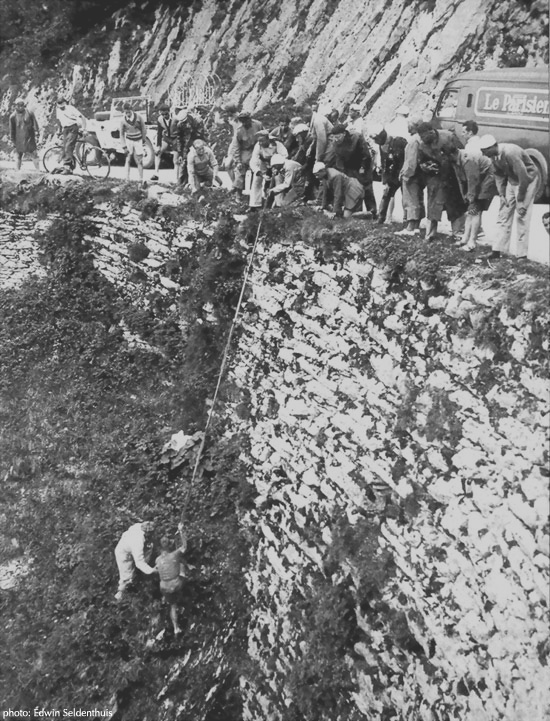