I recently read an interesting article in Velo Magazine over here and thought it might be an idea to test out my translating skills to produce a summary.  In a week of less than stellar cycling news (Contador, Ullrich, Longo and a couple more) maybe we are in need of a hero.

Albert Richter was one of the best sprinters in the world during the lead-up to WWII. He was a 3-time winner of the Paris Grand Prix, Amateur World Champion, 7-time champion of Germany, 4-time bronze medal winner in the World Championships and twice silver medalist. He was a strong, tall, handsome athlete with blond hair and blue eyes. In short, everything the Nazi regime could dream of for their propaganda machine. 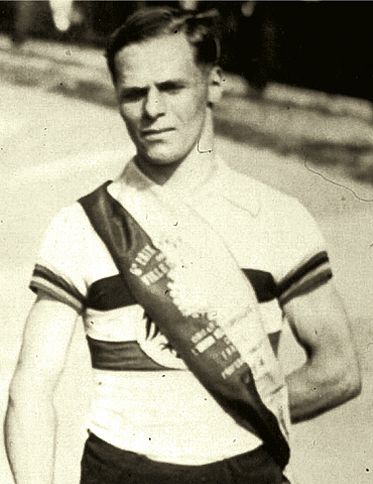 Only one problem. He hated Hitler and considered Nazi’s a ‘gang of criminals’. He also had a Jewish coach, Ernst Berliner, whom he stayed loyal to till the end.

In 1933, after turning pro and feeling less and less at ease with the growing tide of Nazism in Germany, he emigrated to Paris, returning to Germany once in a while to visit his family and race.  His coach, Berliner, stayed in Germany and was finding it more and more difficult to survive there. Because he was Jewish he was eventually prohibited from coaching and was the victim of intimidation and violence. Richter aided his coach by sending him winnings from races. 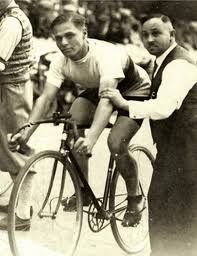 The Nazi authorities were furious and considered this to be an affront to Hitler himself. Scenes like the one below probably didn’t help his case much. This is Richter, just having won the German Championships in Hanover, the only one in the photo not giving the Nazi salute. 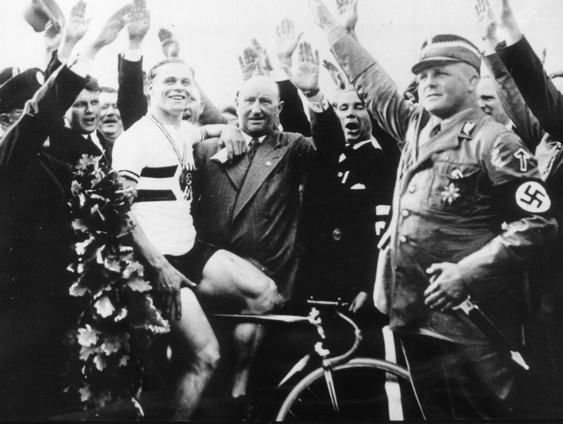 In December 1939, not long after the war began, Richter went to Germany and won the Grand Prix of Berlin. A few days later he was stopped and taken off a train at the Swiss border, smuggling money (in his tires) to another Jewish friend. One month later he was found dead in his cell, the Nazi press saying at first that he had died skiing in the Alps, then changing it to a suicide, reporting that Richter had become overcome with guilt at trying to aid a Jew. The death was never formally registered, so the truth is still unknown. Albert Richter was 27 years old.

Richter’s story, among others, is part of a special exhibition on sport during the Nazi regime at the Shoah Memorial in Paris, running till March 18th.

8 thoughts on “Albert Richter: The Sprinter Who Defied Hitler”