Cycling and Beer – a Marriage Made in Belgium

Remember back in April when I went up to northern France and Belgium on a press trip, of sorts?

I see, well, in April I went up to northern France and Belgium on a press trip, of sorts, and had a bone-jarring weekend riding on the famous pavé of the Spring Classics races of Paris-Roubaix and the Tour of Flanders. I was there as part of the first wave of guests of a new cycling tour company called, appropriately enough, Pavé Cycling Classics. Why am I blogging about these guys so many months after the fact? Apart from a little more free publicity for William and Alex, I just received in the mail this morning my very own Pavé jersey! Take a look.

This is the best part: check out the beer bottle sticking out of the pouch. The beer, micro-brewed specially for Pavé, is made in Belgium, which means you don’t need to ask me if it’s good. Quick quiz: what play on words is employed in the name of this beer? How obvious and silly you think this question is will determine how much of a cycling fan you really are. Anyway, cool jersey, don’t you think? 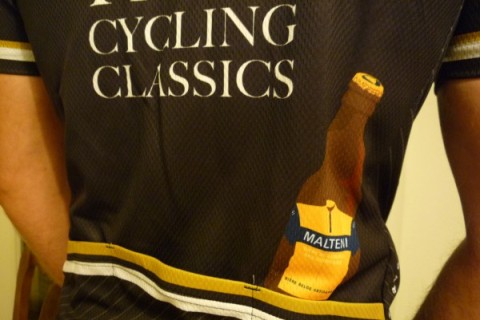 And since we’re in ‘plug’ mode, Pavé, along with The Velominati (yes, the Keepers of the Cog), will be offering a rare treat next spring: a 9-day tour that includes riding all over the cobbles of the Hell of the North and Flanders (of course), a visit to the Eddy Merckx bike factory (to pay respects to ‘the prophet’, as the Velominati refer to him), riding with 4-time Paris-Roubaix winner Johan Museeuw, Malteni beer AND watching Paris-Roubaix live on Sunday.

If you make it through this week without your teeth falling out (you don’t know fun till you’ve ridden cobble stones at 30 kph!) I am sure it’ll be one for the ages.

7 thoughts on “Cycling and Beer – a Marriage Made in Belgium”