The are some things in life that just make sense – peanut butter on toast, for one (although French supermarkets certainly haven’t caught on to this yet..). Another infinitely sensible idea is creating bike paths out of old, unused railways and towpaths. It just seems like the right thing to do.

And that’s what the Conseil Général of Ardennes has gone ahead and done, and on Day Two I got to ride on it.

The bike path, like I wrote in my previous post, is 83 km long (for now) and runs along the Meuse River up to the border of Belgium. What I didn’t mention is that this simple idea could be the rebirth of a fairly depressed area (I’ll write more about this on my other blog soon), since metalworking, the main money maker till very recently, has taken a major hit in the last 30 years or so. The department is obviously pinning its hopes on tourism as a possible game changer for the economy, at least in part.

And why not? The area is relatively wild and very pretty, which the cyclotouriste wants, and they’ve got a lot of the major infrastructure in place already (e.g. a bike-friendly train that goes up the whole length of the river). Not to mention its proximity to Belgium, and especially bike-loving Holland. Could be a winner.

Here is the path near Nouzonville. The river is already a popular way for Dutch and Belgians to cruise on their pleasure boats. One guy told me that he could take his boat from Holland all the way to Béziers (near where I live) on the canal systems of France – a trip of well over 1000 km, I’d guess.

Next, a couple of very friendly mountain bikers, one of whom slapped me on the back as he passed me, sporting a hearty ‘Salut! ça va?’ I thought he thought he knew me, but he was just a happy guy on his bike, since he was treating others with similar jocularity. A nice change in reserved France.

Some helpful signs to tell you where you are and where you’re going.

This, as if I need to tell you, is a Rosalie, pedal-powered by up to 4 people. M. Lococq, the owner of many Rosalies for hire, told me that he even has one or two for handicapped folks, although I didn’t really get how they worked. He is located in Bogny, around half way up the river, and is only one of 3 places that rent bikes at the moment (he has ‘real’ bikes as well). His establishment, like all the others, are spanking new and flourishing, at least in season. M. Lococq does have one big problem, he admitted: the Dutch, a major portion of his clientele,  are just too tall for his bikes. Let that be a lesson to others considering a similar career move. 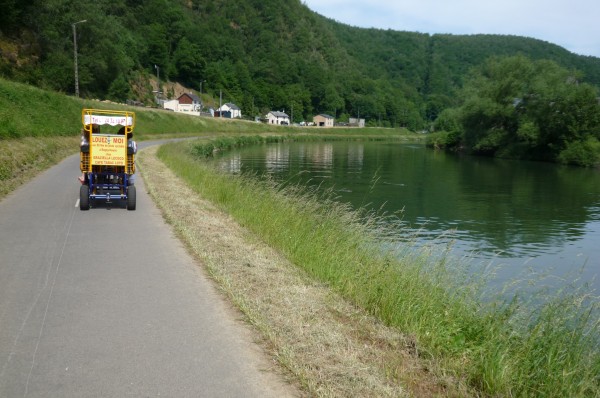 I stopped for lunch near here at the place below. I’ve been told that you know you are in the north of France (or French Belgium) if you see a Friterie. Not one to pass up a cultural experience, I happily dined on frites and a hamburger on a picnic table next to the river. One of the many benefits of traveling by bicycle is that you can fool yourself into thinking you can eat and drink whatever you want. Note: that’s not really true, but I’m still waiting to learn the lesson.

One of the many villages on the way. But don’t ask me which one.

This one I do remember because it was at the end of the only real detour of the trip. There is a nuclear plant near this village and the path, instead of passing under the stacks, skirts around them on well-signposted roads. I give you, Chooz.

Incidentally, slate was/is mined in this region and just about every house has a roof made of it, as you can see from the amount of medium-grey in nearly every photo I have uploaded so far.

This is also Chooz, or whatever is right next to it.

And finally Givet, the end of the voie verte and the beginning of Belgium. From here you can connect to the RAVeL network of long-distance bike paths in Belgium which, if you have the time, money and energy, can get you to The Netherlands, Luxembourg or Germany. Take your pick.

My day wasn’t over though because I had a hotel booked back down the river in Haybes – the cozy, bike-friendly, and English-speaking St. Hubert. It was here that I had my most memorable meal. I’m not a big pig eater, but this area is well known for its boudin blanc, or white sausage, so I gave it a try. This particular boudin was served up in a creamy sauce that was so delicious I nearly licked the bowl clean after mopping up the remainder with my baguette!

The hotel was quaint and again, obviously recently renovated/upgraded. The owner had just opened up a new B&B two doors down the street as well. The bicycle, it seems, is bringing in the bucks.