Shoko will tell you that I have a fairly bad track record when I rent cars. I’m not sure what it is, but for all the money and time I’ve spent on various troubles we’ve had when renting, I might do just as well buying a car. I’m not very happy to report that this day continued the tradition.

Long, ongoing saga short, I left my licence on the roof of the car when packing it and yes, drove off into the sunrise. We didn’t realize it till we were already in Provence and it was long gone by the time we got back in the afternoon. For the superstitious, this might not have been a good omen.

But things got better as we arrived in Beaumes de Venise and met up with Karsten and Sarah, down for a little cycling holiday from Paris. It was a typically lovely sunny morning in Le Sud. Here is part of the start crowd. There were so many racers that Karsten and I didn’t get across the line till 6 minutes after the gun went off. Yes, I know I said I’d position myself farther up the crowd a while back…I’m a slow learner. 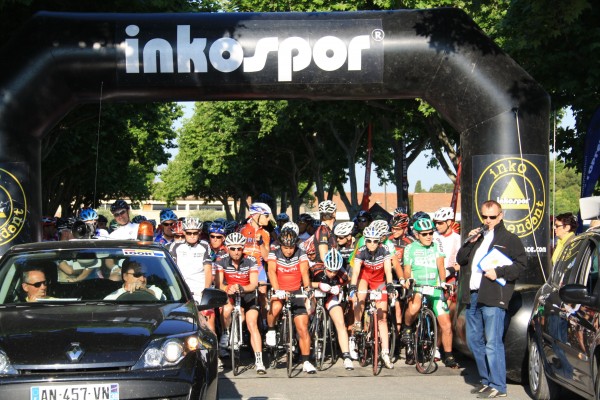 Once we did roll over the line it was a pretty pedestrian ride for the first few minutes; far different from earlier races when everyone was frantically racing for position. We chalked this up to the fact that most people were saving their energy for Ventoux and/or we were near the back of the crowd and the serious folks were already 6 minutes ahead of us.

No matter, we did our now-familiar ride through the ranks, making a good pace and even enjoying the scenery (this area – Vaucluse – is beyond beautiful). There were a couple of not-insignificant climbs before we even hit Ventoux, but both Karsten and I continued to roll along at a good pace.

This was a little surprise to me, but the race actually attacked Ventoux from the north side, i.e. from the village Malaucène. When I discovered this the night before (thanks Karsten) I was a bit irked that I’d done my reconnaissance from the south side, but then I thought this would be a great way to compare the two. They are the same length and nearly identical in elevation gain, but our route lacked the many kms of 10% that the south route has, thereby making it ‘easier’. Well, I can tell you that for me, this certainly didn’t hold true.

Karsten and I stayed together for about 2/3 of the way up the mountain, mostly passing folks and even continuing to chat for much of the way. It was almost too good to be true.

Probably because of the kerfuffle of losing my license I totally forgot to eat the sandwich I had prepared for myself before leaving home. This meant that, other than a bowl of muesli at 5:30, I hadn’t had anything to eat. By the time I figured all this out we were on the road and I was counting the calories I had in my back pockets – two gels and two bars. I tried to take bites every 15 minutes or so, but once you hit a climb like Ventoux, I guess you need more in the tank. I felt a bonk coming on.

Gerry to Karsten: ‘You go at your own pace. I’ll catch you on the descent.’

Karsten to Gerry: A nod. He just rode away, never to be seen again…

I slowed down, sucking on my gel and slurping my sugar-water, but nothing will stop The Bonk (or the much more descriptive, ‘man with the hammer’, as the French call it). So, I’m ashamed to admit, I stopped. It’s a terrible feeling, knowing you might have the legs and the cardio is there, too, but there’s just no juice left. Needless to say, I’ve learned yet another valuable bike racing lesson.

I suppose I spent 5 minutes resting, rehydrating and refuelling. I was still 8 or 9 kms from the top and looking up at what looked to me like a never-ending 9% uphill. I entertained thoughts of turning around even, but then a guy with his little kid came by on their tandem and I thought I wouldn’t be able to live with myself if I did that. Slowly, the energy came back and I remounted. Still it was a long, hard slog to the top and it took all my will power to not throw people out of the way to get at those banana chunks and orange slices at the summit!

My time from bottom to top was around 1:55, which is what I think I did on my ride up the other side (sans photo stops). Needless to say, once all the pain is a distant memory, I’ll be back to see what I can do about getting that time down.

Then came some fun. I remembered the descent pretty well from my last climb and started passing riders and cars – Max speed: 75 kph – and had a great ol’ time for those 20 minutes, except for the stiff neck, maybe.

Another new experience. After that long, nearly pedal-less descent my legs, obviously thinking their work was over, didn’t like the fact that they were being called on yet again for more work. They went on strike just outside Bédoin and both left and right cramped up. This was really new and I wasn’t sure what to do, so I just kept riding as well as I could…and it worked, but not before slowing down a lot and totally losing whatever rhythm I had built up.

Then, the inevitable final ‘surprise col‘ that organizers always seem to add to races. It was low, but after Ventoux anything that goes up is scary and full of pain.

By the final 10 kms I was cooked, but got myself latched onto a small group that pulled me along (yes, I took a turn or two, which was all I could muster) back to Beaumes de Venise, and a very happy finish line. 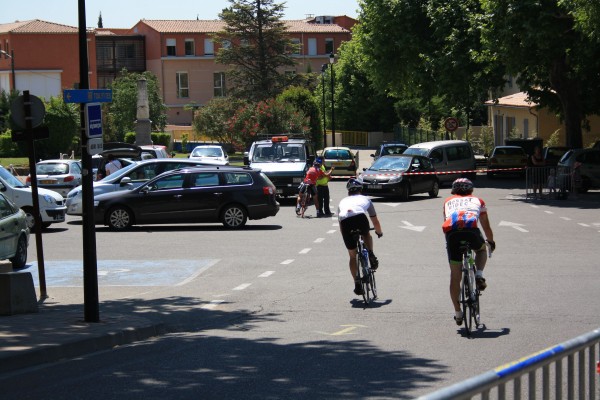 Karsten, by the way, finished nearly 20 minutes ahead of me and ended up, very respectably, in the top 30% of our age category. Me? Well behind, but finally breaking into the top 50%, which I can’t be disappointed with, considering I started the season in the bottom 20%.

Then to the best part of every race – lunch!

1. Rob, I’m sure your week-before-the-race program worked, since I was full of all sorts of energy before the bonk. Steve, assuming you eat enough breakfast, you’ll be well rewarded by following it.

2. Strangely, even though you are in forest far longer on the north side of Ventoux than the south, it is much more exposed to the sun (wider roads, for one). Come prepared. Also, I didn’t see any water on the way up, except for the restaurant at Mont Serein, 6 kms from the top, I think.

3. If you’ve got time to look around, the views can be great. In contrast to the southern side (the hills and valleys of Provence) you get the Alps on the north, if it’s clear enough.