Climbing Mt. Ventoux (and living to tell the blog tale)

A personal account and mini guide of climbing Mt. Ventoux by bike.

Fear is a funny thing. The thought of my upcoming race over Mt. Ventoux has been nagging me since I finished with the last one in St. Tropez, which took more out of me than I had hoped for. My fear forced me to ask myself whether I was woefully unprepared for this type of climb, regardless of the hundreds of hours in the saddle this year. Then yesterday my fear thought it might be a good idea to take the train over to Avignon, ride 40 km to the foot of the Giant of Provence, then the 21 km climb up, down, and back to my train station. Fearless might have been easier…at least I’d only have to climb that beast once!

My 40-k warm-up proved to be rewarding, since the route runs through pretty Provence.

While munching on my morning pain au chocolat, I took this shot of what is either a hobbit church or a chapel that ran out of financing after the nave was built. Something is definitely missing.

It was hazy when I started and I could vaguely see the outline of Ventoux for much of the way. Clouds hung over the summit, making me shiver just thinking about how frigid it must be up there. But the mist lifted, along with my spirits, and she came into view. 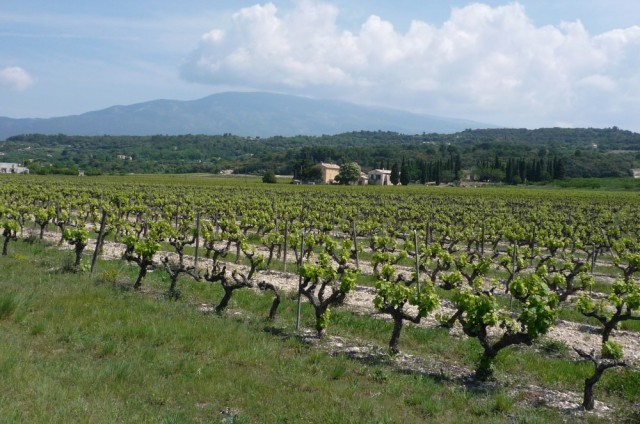 I have to say that, from a distance at least, Mt. Ventoux looks fairly un-menacing. It lacks the craggy sharpness of an Alpine mountain and its gentle slopes (from this angle) belie its height – nearly 2000 meters. If it weren’t for its fearsome reputation (plus the fact that I’d been up by car and motorcycle a few times) I might not have had the respect I did riding up to its flanks.

This is at the roundabout before entering into the village that is considered the start of the climb.

A few roads flow into this roundabout and I joined a steady trickle of cyclists coming in from all sides. At least I wasn’t going to be alone in my suffering! Here is a group of Belgians that I would see from time to time on the climb. 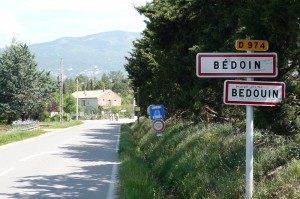 Ventoux can be climbed from 3 sides, but Bédoin is the most popular. This is the side that the Tour de France nearly always attacks Ventoux from, having been used 13 out of the 14 times the Tour has gone up. The 2nd route, starting from the north, begins in the village of Malaucène and is the same length as the southern route, and just about as difficult. The last route, from Sault, starts pretty high already, so is not as hard. It joins the southern route at the Chalet du Reynard (photo below).

Once you are in Bédoin there is no mistaking which direction Ventoux is, even if you might secretly wish you can’t find the way!

You ride through the village, turn right, then you’re on it. Luckily, it is very gentle for the first few km and the scenery is deceptively bucolic.

But you are never far from a reminder of what is coming. These markers happen every kilometer, I think. You can see that the road is starting to rise a tad, with still 19 km to go. 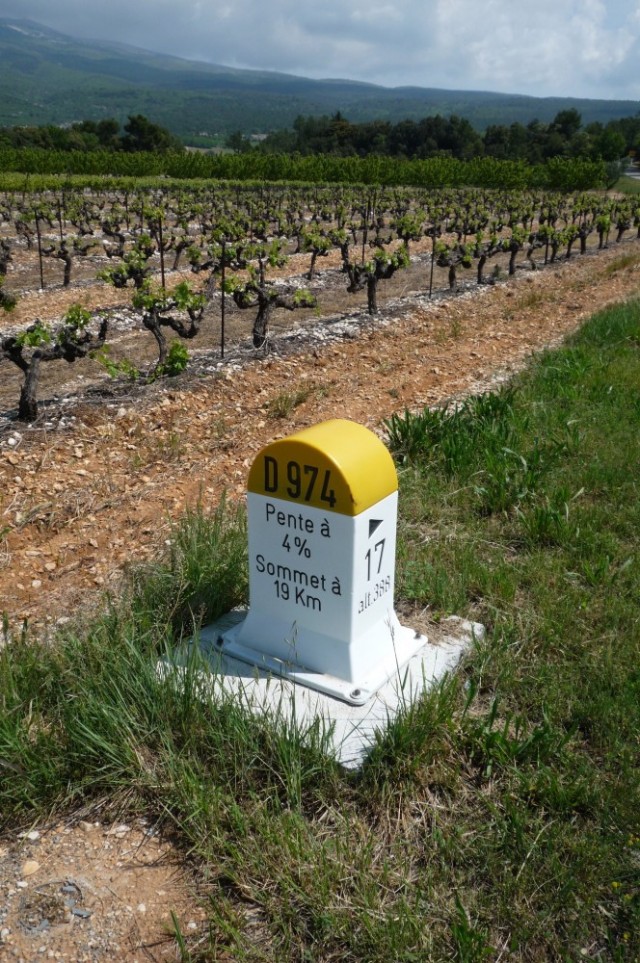 But sorry, 4% is not what this climb is about. After passing a couple of tiny villages the road takes a dramatic turn to the left and then looks like this. 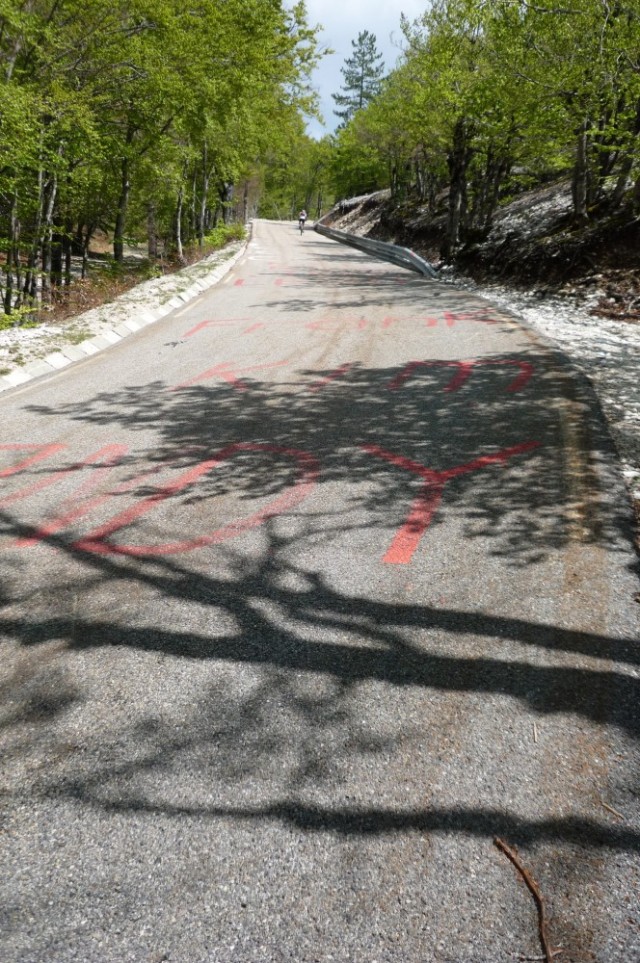 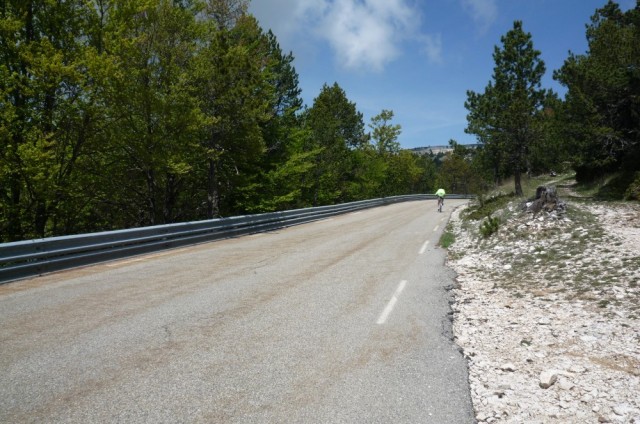 I’m not sure if you can get a sense of the steepness – I know it’s hard even from TV coverage. But your legs don’t lie, and I won’t either when I tell you that shortly after hitting my first stretch of 9% I wondered if I could make it. This is what I had been dreading all along – a climb that would beat me down like the pretender I really was. Cycling is humbling. Somehow though, I found my rhythm and slowly, steadily made my way up.

The climb does drop down to under 7%, but only after something like 10 km of nearly 10%! It’s horrendous. Or it’s fun. It really depends on who you are, I suppose. I was good and truly dropped by a (very thin) lad on that first 10 km, dancing up the mountain as if nobody explained to him how much pain he should be in. On the other hand, I passed a few myself and I can tell you that there is definitely a correlation between pounds and performance when you climb a monster like Ventoux.

At some point, the trees start to thin and then just disappear altogether. Near the border of this transformation is the famous Chalet Reynard, welcoming shattered souls since 1927. 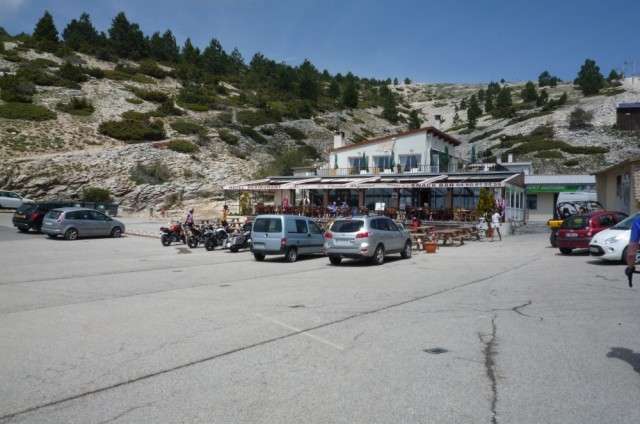 From the chalet it’s 7 km and 500 meters (up) to go to the summit and, worst of all, you can see it from most of the way up. It looks much nearer than it is, I can assure you. Here it is, from a few rest stops on the way. 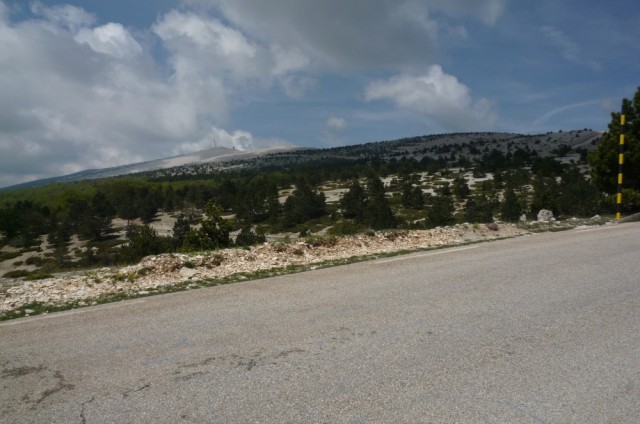 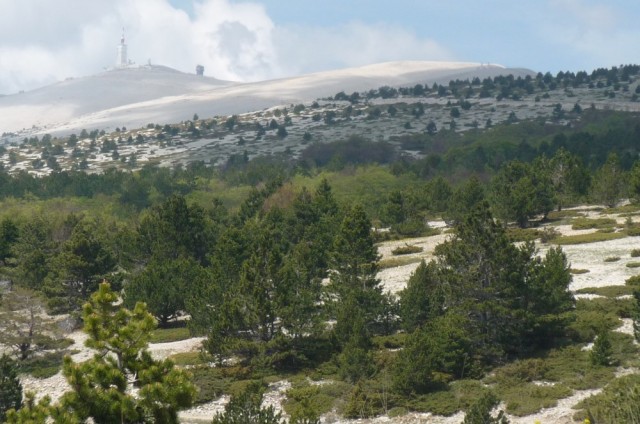 If you are worried about water, like I was, there are at least two natural fountains on the way up; one in the forested bottom half and this one (see map below), a while past Chalet Reynard.

At only a kilometer or so from the summit you pass this monument to British cyclist Tom Simpson, who collapsed and died here during the 1967 Tour.

You’re almost there at this point, but one thing that makes this climb so evil is that the last kilometer is the steepest part of the mountain – more than 10%. It was grueling, at least for this mortal.

But I made it, and even stood on the pedals and danced the last tight hairpin to the parking lot. 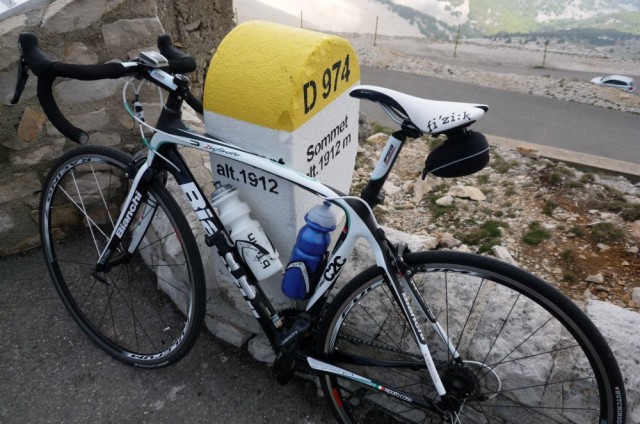 I wasn’t feeling like doing much more dancing when I got off the bike though, except maybe to keep warm. It was around 5 degrees at the summit. This is before I slapped on my fleece headband and long gloves – extra weight you won’t regret hauling up the mountain! 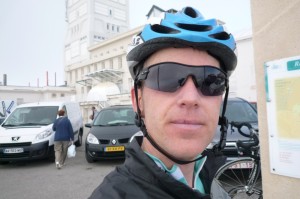 Predictably, the descent was fast and fun, but I had been so consumed with the thought of the climb I hadn’t considered going back down. It. was. exhilarating. Suddenly, I found myself singing Free Bird (well, the parts I remembered…) and passing cars. Great, great fun.

So fear, thanks for taking me up there. At least now I know what I have to do again in 3 weeks…at racing speed. Shudder.

1. I did the climb in May and it was already crowded with cyclists. I would think the shoulder seasons are the best (May/June – Sept/Oct), since the summer is sweltering hot.

2. Having said that, the top can be cold at any time. Come prepared for the descent (at the very least a windbreaker). Also, the wind can be very, very strong above Chalet Reynard.

3. If you want to avoid crowds, climb from the northern side (Malaucène). It also has a nice cycling lane.

4. Bédoin has a couple of fountains with drinking water, as well as at least two more on the way up.

5. If you come, stick around a few days. The area around Ventoux is picture-perfect and great for cycling. Sault, for example, is a major lavender region and riding there in June or July is heaven.

6. Come fit and light. I’m only speaking from my own experience, but I had the feeling that any extra weight I was carrying was recognized by the mountain and I was punished for it!

7. There are usually guys up there taking photos of everyone during the climbing season. Ventoux Photo and Sport Photo are two that are consistently there taking pics of you, then offering them up for sale on their sites soon afterwards.

8. Check the wind conditions. Ventoux can be evilly windy .

Since this first attempt I’ve climbed Ventoux two more times, with vastly different results. Here’s the sportive I did shortly after this article was written, the next, most satisfying climb, in June, and one more from the north side in July.

If you’d like to climb Ventoux, or any other ‘mythic’ mountain, you might like Tour Climbs: The complete guide to every mountain stage on the Tour de France

. For the definitive biography on Tom Simpson, try William Fotherington’s Put Me Back On My Bike: In Search of Tom Simpson

Finally, my favorite Ventoux quote, taken from Need for the Bike

, by Paul Fournel (2003, University of Nebraska Press), an excellent little book on one man’s love of cycling.

“The Ventoux has no in-itself. It’s the greatest revelation of your-self. It simply feeds back your fatigue and fear. It has total knowledge of the shape you’re in, your capacity for cycling happiness, and for happiness in general. It’s yourself you’re climbing. If you don’t want to know, stay at the bottom.” (pg. 98)

2014 Update: Lots has happened since this first fateful climb nearly 4 years ago. I have now climbed Mont Ventoux 40 or 50 times and have a cycling tour business based around the mountain. If you’d like to have a little support on your ascent, or maybe a cycling holiday in the area, here are a couple of pages from 44|5 Cycling Tours – born in a way, of this blog article!

29 thoughts on “Climbing Mt. Ventoux (and living to tell the blog tale)”