Before I get to Hungary, I’d like to say for the record that Slovenia is a really nice place to cycle. The roads (except maybe in the east) are excellent, the people were very friendly and sometimes even English-speaking, the traffic is light, and the scenery is great. The food, well, it’s food and it’s not expensive! Slovenia, we’ll be back!

Now onto Hungary. I have to say I’ve been sitting here racking my brains for something to say, but I guess we just didn’t stay long enough to get a feel for the place. Also, because of our route we were truly in the ‘back of beyond’ most of the time. But, lets start. Maybe something will pop up as I upload pictures. Here is the obligatory border shot.

I know what you’re thinking, ‘hey, that doesn’t look like Hungary on that sign’. I was thinking the same thing, but probably to a Hungarian it does.

Oh, here’s something about Hungary. They’re cycling paths suck. I shouldn’t be too hard on them, I know, but just slapping a bike logo on a sign then paving over some tree roots does not a cycling path make! But at least they had them. Every big, fast road had an alternative cycling path – something France might take heed to. Ah, and this part of Hungary was pretty flat. 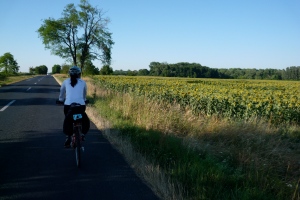 And here’s something I’ll bet you didn’t know. Hungarians love gnomes. We passed a few places along the road selling them, and saw a couple in gardens here and there. What’s the deal with gnomes, anyhow? When you really think about it (on a bike you have lots of time to think..) it’s an odd thing to do, putting little men in your garden. I’m sure there’s a logical explanation. Anybody care to enlighten me?

Next, a travelling bakery that we passed (and stopped at for a strudel) in a little village somewhere.

As we got nearer the Austrian border the inverse of what happened in eastern Slovenia occurred – houses started getting newer and better kept up, cars – ditto, and even the bike paths smartened up! 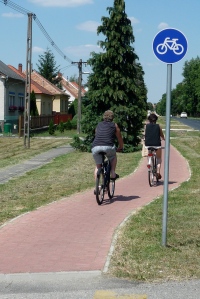 Just near the border of Austria we stayed in a guesthouse that obviously catered to the German-speaking world (not surprising, of course) and we were treated to more good beer and more brown food. 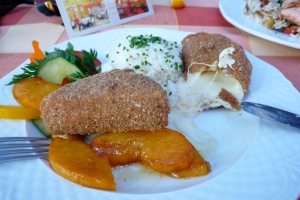 We had a rare short day, so had time to take a stroll in the fields after dinner. And this is what those fields looked like. 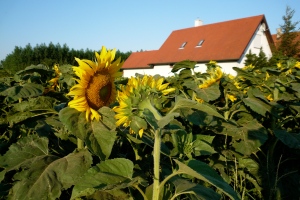 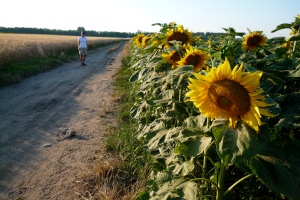 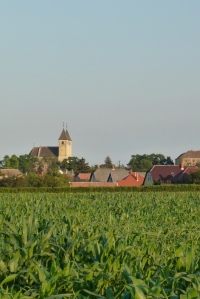 Next up: another blog entry, another border – Austria.