More ‘filler’ while I’m keeping myself away from my bike…

The biggest Classic is the 260 km Paris – Roubaix, the “Hell of the North”, appropriately named due to its many stretches of rough, ancient, cobbled roads (the Tour de France will run over some this July), but actually given that particular name because of the many WWI battlefields the race runs through. Incredibly, this race has been run every year (excepting those two pesky World Wars…) since 1896! 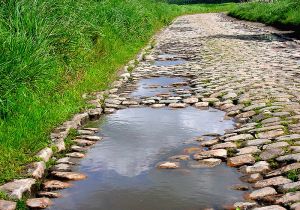 If you want to get a good sense of the toughness of this route, not to mention the riders, check out “A Sunday in Hell“, a 1977 documentary that follows the race from first massage to last shower. Merckx, Poulidor, Maertens and other legends of European cycling are in there. A more modern attempt is “Road to Roubaix”, also worth a look, if for no other reason, to see how little Hell has changed in 30 years!