The wonderful Cévennes region north of here is a hard place to make a living, if you want to grow something anyway. The hills are steep and the soil is probably not that great. If you want a garden you better know how to build a terrace out of your land, like has been done for centuries (Stevenson and Modestine slept on one way back when). There are a few products, though, that are a specialties of the area, and the noble chestnut is the big one. It’s also everywhere you go at the moment, which is why riding buddy Anne and I ventured up there.

A friend of hers organizes the annual Rando des Châtaignes, a quite convivial un-timed ride that – this year at least – took in at least 4 cols of various lengths and gradients, totaling 27 km of climbing. That meant a lot of descending, too, which was a little damp and had other hazards. 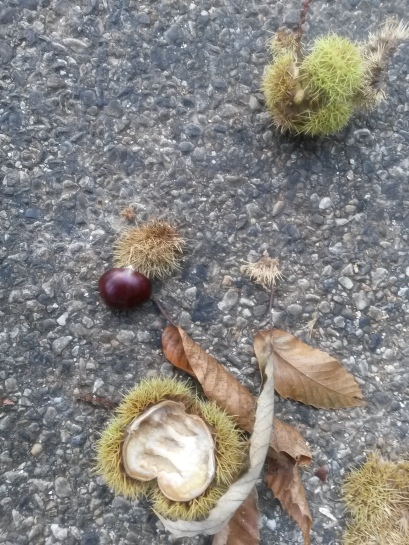 Chestnuts aren’t that dangerous in this state, but once a cluster of them have been run over by enough cars they turn into a slippery, omnipresent goop that is sometimes hard to avoid on a 10% descent. We did, though, and everyone in our little group made it back to basecamp upright. Here’s an unintentionally atmospheric photo of Anne and Pascal’s brother, whatever his name was.

At the end of the ride I was approached by several people who had some connection with Canada, like the two guys who cycled all the way across the country a few years ago. Their verdict: don’t ever consider riding across the Prairies. I have heard the same before. Then I was awarded with a paperweight with the emblem of Nimes emblazoned on it. When I asked if it was because I was the only Canadian on the randonée, Bernard, the organizer, said that no, there was another one, but I came from the farthest away. I was born on the Atlantic Ocean, so I’d be curious to know where the other Canuck hails from.

On the way home I stopped in Anduze to see if I could find some chestnut flour for Shoko (or for me, rather, since I’ll be the one making the tarte, it seems) and happened upon a chestnut farmer I couldn’t pass by. His nutty creation is lubricating my prose right now.